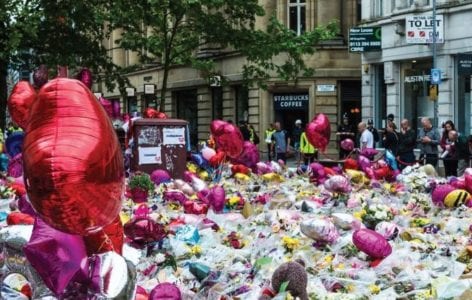 At right, flowers, balloons and toys were left on St. Ann’s Square in Manchester as a tribute to the victims of the Manchester Arena attack.

Convention and event venue managers across Europe are still on high alert following a suicide bombing at a concert in Manchester, England, in May that killed 22 people and injured dozens more. It was the first attack that directly targeted the event industry, and it has sent reverberations through the trade show and special events world, prompting facilities to increase security measures and reassess emergency plans to cope with such an attack should it happen.

“Our sincere condolences and sympathies go out to all affected by the terrorist atrocity at Manchester Arena,” said a joint statement from the Association of Event Organizers, the Association of Event Venues, and the Exhibition Supplier and Services Association the day after the bombing. “We pay tribute to all the emergency services, and to the staff of Manchester Arena, for acting with great bravery and compassion in the face of such a deadly and callous attack.”

Many venue and association heads expressed determination that terrorism would not thwart ordinary operations for the trade show, meeting, and event industry. However, some pointed out, preparedness would continue to require a concerted effort and an investment in additional security measures.

“We are deeply saddened by last night’s terror attack at Manchester Arena and our thoughts are with all those involved,” said Meetings Industry Association’s chief executive, Jane Longhurst. “As we have unfortunately witnessed, the capabilities and tactics of terror organizations and criminals continually evolve. Security provision needs to be viewed as a necessary investment rather than a cost and fully integrated to maximize its effectiveness.”

The National Arenas Association, which serves UK arenas seating 5,000 people or more, released a statement saying the organization was making every effort to improve the safety of arena staff and customers. “This is achieved through the sharing of best practice and advice from security advisers, the police (including counter-terrorism officers), event promoters, and organizers,” the statement said.

“The NAA also provides specific training delivered by leading security and event consultants to ensure that Arena staff are vigilant, knowledgeable and qualified to take appropriate action both before incidents arise, and if necessary, afterwards.”

London’s ExCeL venue, which was set to host the MCM Comic Con a week after the attack in Manchester, announced enhanced security screening that it warned could cause longer line waits but would improve safety for participants. Show officials also asked those who planned to dress as cos-play characters to leave any form of imitation weapon at home.

The European Arenas Association said it has been working with partner venues to improve security tactics, and that it will continue to focus on best practices going forward. “Following the special Security Symposium program last year and our follow-up safety meetings,” officials said in a statement, “the EAA will continue to take a leading role in educating its members on the newest technology and methods of securing our public sports and entertainment venues, and in protecting our tenants and guests. Our semi-annual meeting, taking place at Paris’ AccorHotels Arena, will focus on the updated information from Manchester while further sharing the best practice procedures from our members. Our membership stands in solidarity with the arena, the responders and investigators working hard in Manchester and we are heartened to read of the stories of bravery and courage shown by those teams and the local emergency services.”

Efforts to bolster security at domestic and international events have long been underway, though the matter has been treated more urgently since terrorism made headlines in 2016 in Istanbul where attackers detonated devices very near the city center while an international convention was taking place.

The Global Business Travel Association found in a 2016 survey that 52 percent of U.S. travelers felt more secure during domestic travel, though many ranked Western Europe and the United Kingdom particularly as generally safe destinations as well. Recent incidents in London and Manchester stand to jeopardize that perception, though the reality, researchers found, was that 57 percent of those surveyed said they believed that terrorism could take place anywhere and that they rely on organizers and venues to have solid security measures and responses in place.