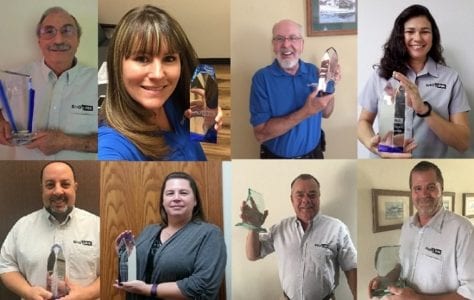 Sho-Link held its annual leadership meeting in Philadelphia, Penn. Several employees were recognized with awards for their achievements and years of service with Sho-Link.

Steve Bierbryer, Miami city manager, received a 15-year service award. Bierbryer commented, “I am proud to work for Sho-link, a company with high standards and consistent quality on the show floor.”

Lauren Benton, Las Vegas labor coordinator, was awarded for ten years of service. When asked regarding her time with Sho-Link, Benton stated, “The last ten years has taught me an incredible amount and I can’t wait to see what comes next.”

Leandra Spontak, Southern California city manager, earned an award for ten years of service. When asked about her career at Sho-Link, Spontak stated, “It has been gratifying and fulfilling to be part of a great work family for the past ten years. I have grown tremendously as a person and professionally. Thank you Sho-link for believing in me!”

Robert Tarolla, Las Vegas city manager, was awarded for five years of service. Tarolla recalled, “The past five years have been a lot of fun.  I am blessed to be part of an organization that has great core values.”

Katrina Thomas, accounting assistant from Sho-Link’s corporate office, was given an award for five years of service. Thomas stated, “These last five years have flown by, which always seems to happen when you like where you work.  I look forward to many more years to come.”

Scott Ciepley, the Chicago city manager was the recipient of the Office Appreciation award. Toni Jendras, director of administration stated, “Scott truly exhibits our culture of partnership in his support of the corporate office.  Well deserved, Scott!”

David Benson, San Diego’s city manager, received the Customer Appreciation award. Colleen Johnson, corporate vp, explained, “Dave is a consistent provider of exceptional customer service, setting an example for the entire Sho-Link organization. He clearly recognizes the impact of positive service and attention to detail. It’s a pleasure to see him recognized for his exceptional performance and commitment to Sho-Link’s core values with this award.”

Established as a cooperative in 1993 by an elite group of national exhibit houses, Sho-Link is a nationwide, high quality I&D supplier with competent and experienced labor providing consistent service and know-how. Their focus is on managing the unexpected as a true partner in the many diversified fields of installation and dismantle that include tradeshows, museums, corporate environments, private events and retail installations.  For more info about Sho-Link, visit www.sho-link.com or call (847) 735-0640.