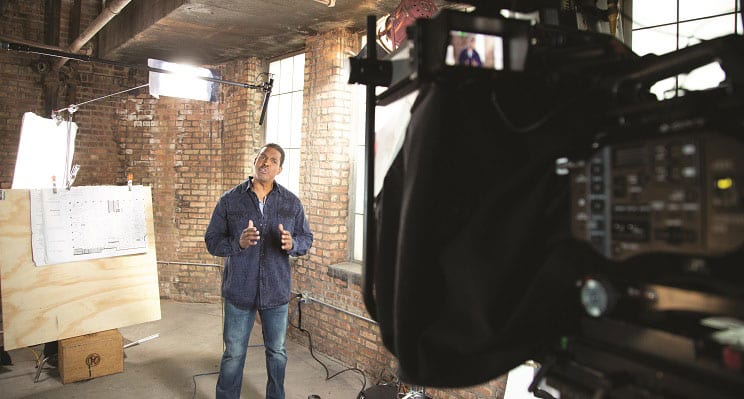 Shop To Showfloor: “Built to Last” Starts Its Sixth Season on TV in Chicago

Focusing on Skilled Labor Training & The Stories Behind Every Project

When the Carpenters union in Chicago was trying to hammer out some ideas on how to spread the word about what it does, the Chicago Regional Council turned to television. The result is Built to Last, a product of the Chicago Regional Council of Carpenters’ Labor and Management Committee and a TV show that is currently in production for its sixth season set to air in the spring. 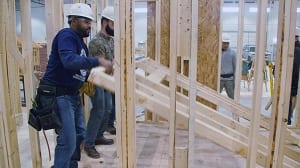 “It isn’t a show about swinging hammers,” says Anthony Janowski, marketing director for the Chicago Regional Council of Carpenters. “It’s about the importance of skilled labor. It illustrates the unique benefits provided by skilled labor and the contributions it can make to the community. We never really push ‘union’ on the show. We focus on the productivity of skilled labor training. That’s what it’s all about—training, training, training.”

The show currently has three hosts: Mark Nilsson, Rob North and Monica Pedersen. Episodes may focus on multiple projects and how they affect the community. For example, the seventh episode of season four showed how skilled labor converted a former jail into a center for the arts, but the first segment in the episode is probably of more interest to readers of Exhibit City News. It showed how carpenters transformed McCormick Place into what is essentially the world’s largest factory in just two weeks for The International Manufacturing Technology Show (IMTS).

“Our council decided to tell stories about our carpenters and create awareness about the many crafts within the carpentry trade, and when we first started it was just that,” says Janowski. “Now we find the story behind every project. Once we have that, then we bring the carpenters in. They might not come until the end of the story, but there’s always a reason why the carpenters are involved—it could mean assisting the community, driving public awareness, or inspiring advocacy.” 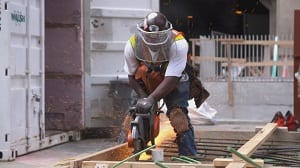 The segment about McCormick Place and the IMTS opens with a brief history of the facility and how Chicago became important in the exhibition industry, particularly exhibitions involving manufacturers. From there it segues into anecdotes and testimonials by individuals involved in the industry and the community, intermixed with visuals of impressive displays including a car being manipulated by a robot arm in the midst of the convention space. Only after all of that is established do the carpenters enter the picture.

Initially the show aired on public television, but after three seasons the popular educational vehicle increasingly commanded a greater reach capability and was picked up by ABC Television.  The show now airs on Sunday mornings on ABC 7 in Chicago. All five seasons are also available for viewing at BuiltToLastTV.com.

“The ABC Television brand is the most familiar to America,” explains Michael Terenzio, business development executive of ABC Television.  “And it reaches the kind of audience that appreciates the benefits of skilled labor, as well as potential new members seeking a better life.”

The show was nominated each of the last two years for an Emmy for “Outstanding Achievement for Magazine Programming” by the Midwest chapter of the National Academy of Television Arts and Sciences.

Season five spotlighted how skilled labor sets the benchmark for performance training, safety best practices and industry-best productivity, making it the smart choice of professional contractors. Season five also showcased public and private economic developments and partnerships and interesting projects and individuals that collectively exemplify the real-world contributions that organized labor makes toward the community. It also introduced how other forms of skilled labor work in concert with the carpenters to better the community, 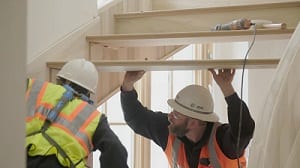 “We’ve taken it from more of a carpenters show to a skilled labor show,” says Sean Murray, the show’s executive producer. “We brought in the electricians and painters last season. We think that by adding diversity of the building trades, we’ll grow the audience.”

One of the hopes of the show creators is that the show will help grow the numbers of new people interested in joining the skilled labor force.  “There are benefits to joining a skilled labor union,” says Janowski. “You can earn while you learn and you usually get placed and have a solid career afterwards, which is more than a lot of college graduates can say.”

Production is about to start for season six, and the union and the creators of the show hope to expand its scope and shooting locations. They envision getting other regions of the country involved and infusing more participation from other branches of skilled labor.

“The Carpenters’ Labor and Management Committee has proudly invested in Built to Last as it invests in the communities where we live, work and play,”  says Gary Perinar, executive secretary-treasurer of the Chicago Regional Council of Carpenters. “This show is a success because of the people involved, their dedication to the carpentry trade and proficiency in a wealth of crafts, the seamless collaboration between union labor and professional contractors and enticing stories with fascinating people that elicit emotions ranging from compassion and inspiration to intrigue and exultation.”