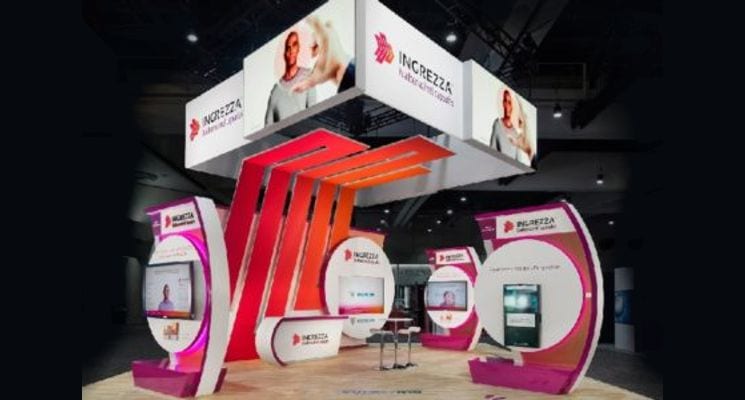 The 69th American Academy of Neurology (AAN) annual meeting on April 22-28, 2017, was held at the Boston Convention & Exhibition Center and the weeks leading up to it were nail-biting for Neurocrine Biosciences, a San Diego based biotechnology company, and Access TCA, an event marketing organization whose mission is “Building Brand Engagement” and memPROJECTorable strategy-based solutions for leaders in the healthcare, automotive, animal health, technology, and consumer goods industries.

Neurocrine had developed the first product to treat sufferers of tardive dyskinesia (TD) called INGREZZA® (valbenazine), a novel, once-daily, selective VMAT2 inhibitor that was awaiting FDA approval. TD is a condition characterized by involuntary movements of the face, jaw, and other areas of the body, often brought on by treatment with dopamine receptor blocking agents, such as antipsychotics. They had turned to Juice Pharma Worldwide to develop a campaign to launch the drug pending its FDA approval and to Access TCA to bring the campaign to life at AAN with or without FDA approval (they were prepared for either scenario: if FDA approved, the booth would be branded, if not approved in time for the show, then the booth would be unbranded).

Explains Brendan Emerson, director of client services at Access TCA, “It was very collaborative. We had three-way brainstorming sessions with Neurocrine and Juice about ways to bring the campaign to life in an exhibit space.” The exhibit had to adapt to a number of possible scenarios, including not receiving FDA approval, which fortunately came through on April 11, just days before the show opened. 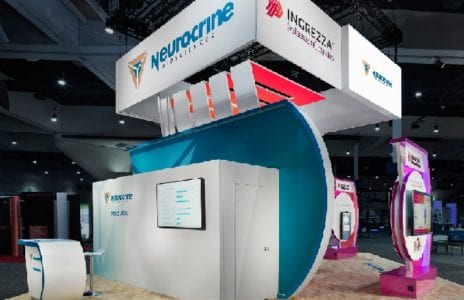 According to Emerson, the time crunch meant that the functionality of the exhibit had to be directed with a few simple changes. “We had to plan for two scenarios–branded vs. unbranded in the space,” says Emerson. “We did this by using digital graphics that could be changed out and printed branded colors that could be covered with corporate (unbranded colors and graphics onsite, if needed),” adding, “We had red and purple branded graphics approved but then had a backup plan of all blue vinyl to cover up the branded graphics if the approval didn’t come through in time.”

Madeline Hatton, marketing manager, HCP advertising and promotion for Neurocrine, says, “We were prepared to turn around the booth within two weeks which speaks volumes about the quality of our partners and their topnotch work. Juice and Access TCA treated this project as if it was their own booth, and they were great partners in making sure our vision was realized—they made sure we had a ‘statement’ booth as we revealed INGREZZA for the first time.”

According to Derek McLamb, Juice Pharma Worldwide’s account director, “The launch of a new product is always an exciting time as it offers the unique opportunity to stand out on the convention floor. Visually, the use of bold, bright colors and complimentary campaign videos spoke to both the excitement and novel new treatment option.”
Describing the booth, Emerson says, “We had fabric and LED in the header to display a video on TD and INGREZZA. Below the sign was a large fabric canopy that took the shape of the INGREZZA logo bug. There was a vinyl floor with graphic prints and a medical side (completely separated from the commercial side of the booth).” 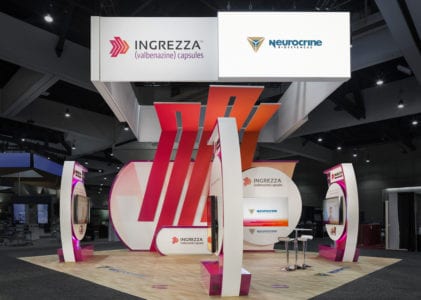 Emerson continues, “The back wall included a disc (the campaign also utilized a circular lens as a visual element to “reveal” patients both before and after treatment), inside the disc was a large monitor for the corporate video and INGREZZA. We offered infused water/catering in the booth,” adding, “there were two double-sided detail stations with touch screens to walk through the touch points of the body that could be affected by TD. The core engagement activity was an augmented reality experience called the TD Mirror, which mapped attendees’ faces and then started to replicate some of the TD movements that a patient could experience. During this process, the TD Mirror would tell you what and how this happens with a patient (with TD).”

The facial recognition software mapped the faces of attendees (mostly doctors) and then showed their jaws and lips moving in real time so they could be put in the patient’s shoes and have an empathic experience and a sense of the possible stigma of TD. It would also educate them about the symptoms of TD in hopes they would learn to identify and diagnose it quicker. The budget was in the $250K-$499K range, and a lot of the money went into the digital aspect so the attendees could see and “feel” the experience of patients with TD. 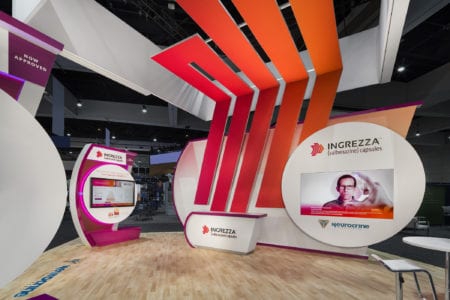 Because TD is a condition that relies on visual interpretation for diagnosis, the horizontal monitors on the kiosks throughout the exhibit displayed videos of patients with TD rather than static images while the vertical monitor used augmented reality (AR) to show how TD affects the patient. The kiosks were wood with high gloss laminates, surrounded by Plexiglas tubes. The red bands transecting the commercial space (vs. the medical space where no product brand elements are allowed) were fabric structures that were an abstraction of the product logo, a sort of M. C. Escher treatment of the logo. There was also an overhead LED hanging sign that displayed the brand video, the Neurocrine corporate logo, and safety information.

For the AAN launch, the booth dimensions were 30×30 feet, and Emerson says Access TCA designed the booth to be open with less structure so there could be multiple configurations including a 10×20 linear configuration as well as 20×20 and 30×30 island configurations. The open design would also keep non-performing costs like drayage to a minimum. The booth has already been to nearly a dozen medical tradeshows and conferences since its debut and has many shows booked for 2018 as well in several different configurations.

Aimee Donovan, Access TCA’s ongoing program account manager, explains, “We knew the shows the client was attending had tight setup and dismantle times, and we were able to construct the booth in such a way to accommodate the timeframes, but also modular enough to fit Neurocrine’s various booth configurations.”

Emerson says “the Nuvista crew on site in Boston was fantastic,” adding, “Access TCA goes above and beyond building a face-to-face experience for healthcare companies. It doesn’t start or end with the exhibit booth—it’s really about entire stories our clients want to tell.”

Juice Pharma Worldwide’s McLamb agrees, and said, “Access TCA was an incredible partner throughout the creative process, from initial design concepts to crafting a booth that truly brought to life the brand and promotional campaign.”