Shop to Showfloor: The Wow Booth: The Omega Group Wows at FIL Guadalajara with India Pavilion 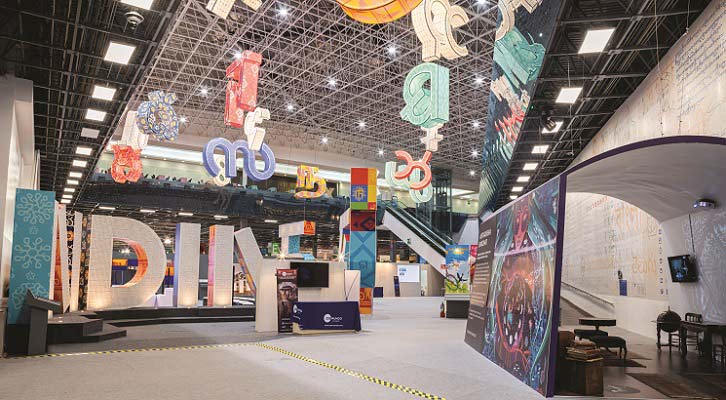 As the largest book fair in the Spanish-speaking world, the fair is aimed at professionals and the general public alike, unlike most other book fairs around the globe. It is a cultural festival in which literature plays a major role including a program where authors from all continents and languages participate, and a forum for the academic discussion of major issues. For nine days, people stand in long lines to listen to their favorite authors, and the whole city is filled with the music, arts, cinema and theatre from the featured Guest of Honor. India showcased a wide array of its rich and composite literary and cultural heritage including exhibiting ancient and rare manuscripts such as Ramayana and Mahabharata along with paintings, handicrafts and photo books.

The Guest of Honor Pavilion was 2,000 square meters (21,527+ sq.ft.), and Alex Escalante from the Omega Group says that “many things made this project special, for example: the large scale of the elements: big hanging letters, big standing letters (six meters high) backlit and big “INDIA” letters; the very creative design that represented the multilingual country that India is with 22 official languages and all the letters represented in the project with 3D letters, graphics and audiovisual content has letters in all 22 languages. Also, we built the project without having very detailed drawings, and we did not have renders at all because we did not receive much information for it, and finally, the short time—just a month and a half—from when we were confirmed for the project to completion.” 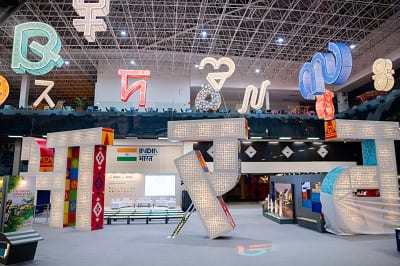 Escalante explains, “The Guest of Honor project at the book fair is always a tender issued directly by the government as to who will be the guest of honor” and he says it was challenging to create the pavilion because there were so many “different parties involved in the Indian government who all made different decisions and ran different processes.” Fortunately, he adds, even though the Indians didn’t send much information, they were able to understand the client’s ideas because “we always had good communication and played well as a team with the Indians even though they were at the exact opposite side of the world and there was a 12-hour difference. They kept saying that ‘working with team Omega was a wonderful experience.’”
Jonak Das, who’s on the faculty of India’s National Institute of Design (NID) in the Exhibition Design discipline, along with his colleagues Tanishka Kachru and Rishi Singhal, were the principal designers for the India pavilion, along with consultant graphic designer Hanif Kureshi, and he seconds those words.

The NID in Ahmedabad, India, was the design partner for design of the India Guest of Honor pavilion at FIL Guadalajara, where the nodal agency was National Book Trust (NBT), Government of India. “We worked with Omega Group on the fabrication of the India pavilion, as they were the selected vendor for the job,” says Das. “While we had communicated primarily with drawings and specifications, Omega could translate our visualized designs extremely well towards the building of the pavilion.” 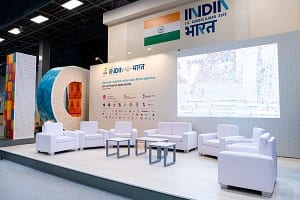 Das explains, “We were working on the theme of landscape of the multitude of vernacular scripts in India, which we depicted through large letter forms both on ground and suspended in air, thus occupying the large volume of the pavilion space, as the primary thematic feature, apart from the various exhibits and functional requirements for the pavilion. The space had multiple entry points and one creative challenge was to visualize the placement of the exhibits in such a way as to give an engaging and spectacular experience for the visitors irrespective of where they enter from. The primary technical challenge was, of course, that we were communicating entirely by mail and could not see or check the work as they were getting built. So, we had to trust entirely on the accuracy and how well Omega interpreted our drawings and visualizations. However, they did a great job in the interpretation and in the end we were very happy with what they did.”

The Omega Group was founded as an advertising company in 1987 by Alejandro Escalante offering a wide variety of services to help companies achieve their objectives through research and field studies. After the opening of Expo Guadalajara in 1987, Grupo Omega began to focus on the display, conferences and expositions market as it has experienced exponential growth, and they have become a company that specializes in design and solutions for exhibitions. For more info, visit http://omegaexp.com.mx/es/en/

This story originally appeared in the January/February issue of Exhibit City News, p. 46. For original layout, visit https://issuu.com/exhibitcitynews/docs/exhibitcitynews_janfeb_2020. For additional pictures, see the Table of Contents and the Shop to Showfloor cover.