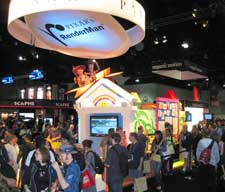 Pixar Animation Studio exhibit had one of the more popular exhibits at SIGGRAPH 2010 which attracted 22,549 attendees.
Photo by Jerry Heath

As in real estate, location appears to be the key to SIGGRAPH 2010 posting a 100 percent increase in attendance over its 2009 conference and exposition.

Held at the Los Angeles Convention Center, July 27-29, the five-day conference and three-day exposition on computer graphics and interactive techniques attracted 22,549 artists, researchers, gaming professionals, filmmakers, students, and academics from 79 countries. Only about 11,000 individuals ventured to New Orleans for the 2009 conference.

“We draw more locally when the conference is in Los Angeles,” said Mike Weil, exposition manager for Hall-Erickson, Inc., which manages the SIGGRAPH event.  “There are a lot of Hollywood-based animation and gaming professionals to draw from. The studios don’t mind sending staff to the conference for a day or two versus sending them to New Orleans for a week. Based on this turnout, we will likely come back to Los Angles more often in the future.”

Candy Adams, aka, the Booth Mom and highly regarded exhibit industry consultant, said she was thrilled with the turnout at her client’s 20 by 20 exhibit showcasing the King Abdullah University of Science & Technology.

“We were absolutely slammed,” Adams said following the first day. “I am sure it is because the technology on display, super computing and visualization, is so bleeding edge.”

Tom DeFanti, a research scientist with the University of San Diego and a consultant representing King Abdullah University said, “Traffic in our booth has been non-stop, beyond capacity, better than I expected. People have been walking past because we are too busy. It’s too bad, but we can’t help it.”

“People just love it,” Lamri said. “We are very particular about our images and General Graphic Exhibits (GGE) does a great job of recreating our images. That’s why we go back to GGE year after year.”

Located in San Francisco, GGE is a mid-size exhibit design company serving the convention, museum, and creative markets.
SIGGRAPH 2011 will be held at the Vancouver Convention Centre in Vancouver, Canada, August 7-11.