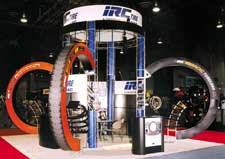 Skyline made an impact on the large exhibit arena with SkyTruss. SkyTruss folds flat for easy storage and shipment, yet is strong enough to construct almost any design.

It started in December of 1980 with a primitive version of the pop-up display in the trunk of a K-car and the drive to innovate. Thirty years later, Skyline Exhibits has nearly 100 design centers throughout North America, representation in 40 countries and designs exhibits of all sizes for some of the world’s most recognizable companies.


“Looking back, it’s been an amazing evolution,” said Bill Dierberger, president, Skyline Exhibits. “We started with one simple system meant to fill a 10-foot space. Now, large, even massive, structures are on our set-up floor every day, some with multiple levels. The exhibit industry has come so far and we feel Skyline has played a significant role in that growth.”

In the beginning
There were no showrooms. Product demonstrations were commonly performed at clients’ offices. A pop-up frame compact enough to be transported in the trunk of a K-car would wow onlookers when it magically expanded to create a display.

“The pop-up revolutionized the portable segment of the industry,” said Dierberger. “It gave exhibitors a good way to present their brand and products, yet it was easy to transport and set up.”

Upon further development, Skyline’s Mirage display soon became, and remains today, the most popular pop-up in the world.

Building the team
The popularity of Skyline’s portable products led to rapid growth. Twice, in 1987 and 1988, Skyline was included on the Inc. 500 list of fastest growing private companies. Exclusive dealers were added to serve areas throughout the United States and Canada, followed by Mexico and countries abroad. Dealer offices employed exhibiting consultants, designers, artists, and service technicians to meet the growing demand for turnkey service.

Carrying through a philosophy
Having made its mark in the portable arena engineering systems that displayed big, but packed small and light, Skyline turned its attention to the larger exhibit market intent on offering exhibitors the same benefits. At the time traditional custom exhibit builders using heavy materials like wood and laminates dominated the market.

SkyTruss was Skyline’s first modular system to make an impact. It shared the structural integrity of welded box truss, but hinged joints on opposite sides of each section allowed it to fold flat and pack much smaller. Exhibitors began to realize significant savings on exhibit operating expenses like shipping, storage and drayage.

The Eurocopter exhibit was designed to accommodated and appropriately showcase 4 working aircraft, 1 full-scale model and a fully-functional flight simulator.

Skyline continues to develop new, market-driven products taking advantage of the latest technologies in graphics and electronics. Its newest modular product, the Envoy Exhibit System, was recently recognized with a Buyers Choice award and an Exhibitor Product Design award.

Skyline is now competing favorably at the industry’s highest level, recently winning a silver Event Design award for its Eurocopter exhibit. The design showcased five helicopters in a massive 120-foot by 120-foot space and featured a two-story structure with multiple VIP lounges and meeting rooms.

“We’re very excited to see the impact our exhibits will have at CES,” said Scott Roschi, Skyline’s creative director. “The design and build will have people asking if that’s really a Skyline exhibit. Our capabilities right now are light-years ahead of where we began.”

Looking ahead
“It’s hard to envision where Skyline will be in the next 30 years,” said Dierberger, “Technology changes so fast and affects everything we do. But I do know that Skyline will continue to do what it does well; live on the cutting edge of technology, embrace design, advocate education, and perform for our clients. Those principles have carried us through 30 years and I trust they will carry us for many more to come.”