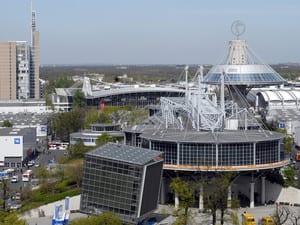 Record numbers of U.S.-based companies are trying their hand at international exhibiting, and research says more than 45 percent of those companies are planning to try exhibiting in Germany. It’s no wonder: Though it’s only about half the size of Texas, Germany is a powerhouse in the exhibition industry, boasting three of the world’s top five largest exhibition venues and five of the world’s 10 largest trade show organizers.

Exhibitions there, or trade fairs as they are often referred to in the German vernacular, cover every inch of the spectrum of industries and they tend towards the massive, attracting exhibitors and attendees from all over the world. But the word “massive” takes on entirely new dimensions when it comes to German fairs, and U.S. exhibitors who think the International Consumer Electronics Show and McCormick Place are enormous can be in for a shock. In Germany’s largest venues, CES-size shows happen routinely, and you could nearly drop two McCormick Places into Hanover Fairground, the country’s (and world’s) largest facility (see photo above right).

It is for that reason that German exhibit designer Axel von Hagen, when speaking to exhibit managers contemplating shows in Germany, suggests they consider skipping the big shows and look for more intimate regional events overseas that may in the end return the same results. The concept sounds counterintuitive until one realizes that Hanover, for example, has more than 5 million square feet of indoor space in 27 halls, and thousands of exhibitors can fit inside.

To compete in that environment is difficult, von Hagen warns, because it’s easy for an exhibitor to disappear in the din, and the realistic return on an investment at that show might be well below a company’s expectations. Researchers at UFI, the global association of the exhibition industry, say the average European booth size in 2014 was 431 square feet, which is considerably larger than the average exhibit space in the United States. Anything smaller could end up a speck in a sea of exhibits, and going larger is more than many budding international exhibitors are prepared to bite off.

But there are exhibitions happening across Europe that appeal to a smaller niche and as such attract a more diminutive number of attendees and exhibitors. But if it is the right niche, von Hagen says, the return from a second-tier trade fair might be well beyond what an exhibitor would see as a tiny dot in one of Germany’s gargantuan events.

In Salzburg, Austria, for example, the Salzburg Exhibition Center spans nearly 400,000 square feet, or about the space of the Baltimore Convention Center, and hosts some important B-to-B fairs aimed at a variety of industries including the scientific, automotive, and engineering communities. Though they are considerably more compact than shows in Hanover, Dusseldorf, and Frankfurt, shows in Salzburg are on par with average-sized events in the United States. The largest professional show in the venue, which is dedicated to the restaurant and hotel industry, draws 700 exhibitors and more than 46,000 attendees to its show hall. In nearby Vienna, two venues – the Austria Center Vienna and Messe Wien – host precisely targeted events designed for the textile, pharmaceutical, and technology industries, among others. And Zurich has a convention center that is home to professional shows for architecture, automation, digital marketing, human resources, the beauty industry and more, all within the confines of an exhibit hall that is 300,000 square feet instead of 3 million. Moreover, von Hagen says, costs for exhibiting in those cities will likely be lower than at major venues, and amenities like lodging and dining will be more economical as well.

Exhibitors may discover that, just as they would find it difficult to be noticed in sprawling trade shows, the buyers they seek would prefer a smaller, more targeted event that appeals directly to them and takes up less of their time. This can be especially true for managerial trade show attendees who often hold the company’s purse strings but are reluctant to spend days away from the office wandering 27 show halls.

Trade fairs are commonly audited in Europe, lending a degree of confidence to the show data reported by organizers. AUMA, the Association of the German Trade Fair Industry, provides audit data and other free tools for exhibitors to help them gauge potential shows. Those tools include a Trade Fair Benefit Check that helps exhibitors establish goals, determine their budget, and calculate the benefits of exhibiting compared to the cost. By plugging in events available in tier two markets as well as the information available about past attendees, exhibitors may find that they can connect with their international target market without having to be in an enormous show hall to do so.