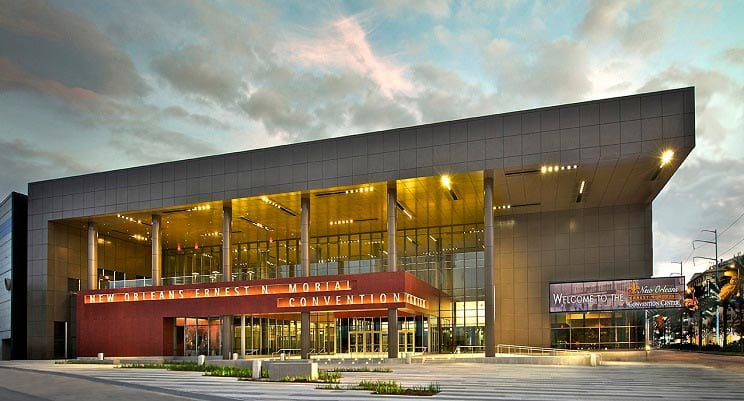 The sorority had convened about 15,000 members on Thursday, and had activities planned through Sunday. Convention center staff had been in regular consultation with the organizers of the Convention throughout the development of the storm.

“Safety of our visitors is our absolute number one priority.  We have a well-tested emergency operation plan and were well prepared to support any decision Delta Sigma Theta made,” said Michael Sawaya, convention center president.  “We will now turn our attention to making certain the activities planned for today are concluded as planned, and our visitors can make plans to remain safe in New Orleans, or return home.”

More than 20,000 meals were planned to be served through the end of the convention. The food that can be safely donated will be distributed to various organizations throughout the area.

The convention center will be closed, except for essential employees, July 12-15. In the event of an evacuation order, the New Orleans Ernest N. Morial Convention Center will not be open as a shelter or an evacuation point.

The next events planned for the convention center are Basketball On The Bayou girls basketball tournament and Jurassic Quest, both next weekend, July 19-21. Neither are expected to be effected by the storm. Jurassic Quest is open to the public and features exhibits of Dinosaurs, rides and other activities for all ages

With 1.1 million square feet of prime exhibit space, in an entirely contiguous hall, the New Orleans Ernest N. Morial Convention Center provides the largest single exhibit space in the country. The New Orleans Ernest N. Morial Convention Center features an award winning staff and first class amenities, and is the sixth largest convention center in the nation. A consistent Top 10 host of the largest conventions and tradeshows in the nation annually, the Convention Center is also one of the city’s “Top Workplaces.” A leading contributor to the city’s robust tourism economy, the Convention Center’s event activity has produced $85.7 billion in economic impact since its 1985 opening, including $5.4 billion in new tax revenue for state and local governments. For more info, visit www.mccno.com.