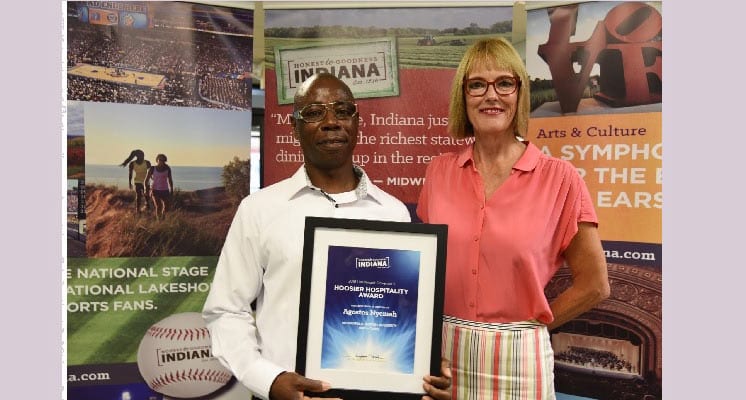 Indianapolis Airport Authority employee Agostos Nyemah has a unique gift among Hoosiers—one that he recently stepped outside of his job description to leverage in helping an international passenger get to his destination. That above-and-beyond act earned him a Hoosier Hospitality Award, presented by Lt. Governor Suzanne Crouch and the Indiana Office of Tourism Development.

A terminal service employee at the Indianapolis International Airport (IND), Nyemah’s primary job is to keep the terminal in world-class sparkling shape—but he also speaks six languages, a skill that doesn’t always come to light in his primary role.

But that talent helped earn him a Hoosier Hospitality Award recently when he assisted a French-speaking passenger who was having trouble understanding how to check his bag. Nyemah put his language skills to work and stepped into translate and pay the passenger’s bag-check fee. Nyemah also spoke with gate agents to ensure the passenger boarded his flight on time.

“The Indianapolis International Airport ranks at the top among airports in North America year after year only because of employees like Agostos,” says IAA Executive Director Mario Rodriguez in praise of Nyemah. “Being behind the scenes daily, we get to see the heart and soul our employees put into their jobs, and Agostos is a shining example of the above-and-beyond effort that characterizes Hoosier Hospitality. Agostos deserves this award hands down, and we’re proud that he’s getting the recognition he deserves—and has truly earned.”

The Hoosier Hospitality Awards recognize a high level of service in tourism-related jobs at hotels, restaurants, attractions and other destinations. This award is given annually to front-line staff members who exemplify Hoosier Hospitality.

In 2018, Nyemah also was recognized by Visit Indy as a ROSE Award nominee. The Recognition of Service Excellence program honors non-managerial hospitality employees who treat every Indy visitor with the highest level of Hoosier hospitality, ensuring visitors feel special and taken care of while traveling in Indiana.

The Indianapolis Airport Authority owns and operates Indiana’s largest airport system. In addition to the Indianapolis International Airport (IND), the IAA has five other facilities in the Indianapolis metropolitan area, including the Downtown Heliport, Eagle Creek Airpark, Hendricks County Airport-Gordon Graham Field, Indianapolis Regional Airport and Metropolitan Airport. IND generates a $5.4 billion total annual economic impact for Central Indiana—without relying on state or local taxes to fund operations. More than 10,000 people work at the airport each day, and 22,600 area jobs have a connection to the airport. IND serves more than 8.7 million business and leisure travelers each year, averaging 145 daily flights —seasonally and year-round—to 51 nonstop destinations. IND is consistently ranked, year after year, as the best airport in North America and the nation, based on ease of use, passenger amenities, customer service, local retail offerings and public art. The airport is home of the world’s second largest FedEx operation and the nation’s eighth-largest cargo facility. For more info, visit  Indianapolis International Airport.