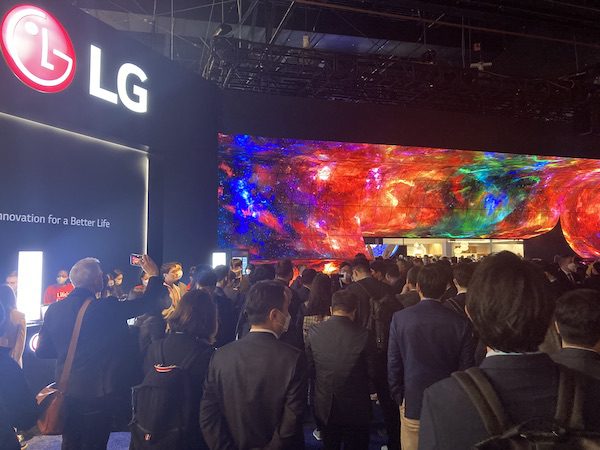 Strong CES Attendance Is Good News for the Tradeshow Industry

In its second year back from the pandemic, CES appears to be regaining its illustrious status as the crown jewel of Las Vegas conventions, evidenced by 2 million-plus square feet of exhibit displays and estimated attendance topping 100,000 on Thursday’s opening day.

There was a 45-minute wait for parking, a crush of people filing through convention halls and long lines at food concessions.

Overall, a good start for the new year. Meeting and event planners are looking at CES 2023, which runs January 5 – 8 at Las Vegas Convention Center and Venetian Expo, as a harbinger for the health of the tradeshow industry going forward.

“As you look at the amount of people streaming through here, I think you’ll see a healthy appetite for the event and the value it brings to the industry,” says Tim Wieland, director of corporate communications for Bosch. “It’s really the place to look to the future and see where technology can provide convenience for everyone.”

Bosch brought hundreds of employees to CES and took 9,900 square feet of exhibit space in LVCC’s North Hall. One of its main attractions was a color-lit car shell equipped with Bosch technology. E-bikes were also popular, not only at Bosch, but at several manufacturers’ booths.

“We want to create technology that provides a benefit to humankind,” Wieland adds.

Since 1978, CES has drawn nearly 5 million convention attendees to Las Vegas and has created an economic impact of more than $6 billion, according to the Consumer Technology Association, organizer of the show. About a third of attendees come from outside the United States.

This year, however, no exhibitors came from Russia. CTA spokesman Scott Bovarnick confirmed Friday that CES is not allowing Russian companies to display their products at the show because of the country’s invasion of Ukraine. There are no Russian startups or firms at CES 2023, nor were they allowed to register.

“CTA stands with the Ukrainian people and strongly condemns Russia’s illegal war. Our thoughts are with the hundreds of Ukrainians who have joined CES as attendees and exhibitors, including staff from the 15 Ukrainian tech companies who exhibited at CES 2022,” Bovarnick wrote in an email to ECN. The ban has affected only one potential exhibitor.

CES 2020 had an estimated $291 million economic impact, including $169 million in direct spending. A chunk of that money comes from hotel rates that typically triple for CES. It also benefits restaurants, transportation services and entertainment venues.

Thousands of people in Las Vegas make their living off conventions, setting up and tearing down exhibits, delivering materials, providing audio and visual effects, staffing display booths. A driver in LVCC’s Loop underground transportation tunnel says she felt an uptick in business starting with SEMA, which drew 130,000 in November.

Tariq Oweimreen, application engineer for Teknor Apex, attended his first CES show from Pawtucket, Rhode Island. His company makes plastic products, and he was there to check out sensors, cameras and autonomous driving at CES to understand who the players are and who his future customers might be.

“It’s very important,” he says. “It looks at where we’re heading with sensors, what consumers like and dislike. It’s cool. It’s futuristic.”

Investors have poured more than $10 billion into startups at CES Eureka Park, which showcases the world’s most promising technology companies. Ring Doorbell debuted at CES 2019 and is now valued at $1.2 billion after being acquired by Amazon.

A 20-foot-by-20-foot booth at CES costs anywhere from $30,000 to $50,000 and includes everything from booth design to show site installation and dismantling.

The most important aspect of a display booth is planning the layout and labeling products, says Courtney Cantor of Hamilton event marketing agency.

She designed the 30-foot-by-50-foot booth structure for RCA, using modern colors, materials and three LED screens to reflect a “refreshed” RCA brand. New products are displayed in vignettes for smart home technology such as automated lighting, surveillance cameras and automated pet feeders that dispense food at programmed intervals, so Fido and Fifi won’t go hungry if you’re not home. Bird feeders feature built-in cameras that use artificial intelligence to identify the birds.

Gadgets are interesting, but the big draw at the RCA booth was the dogs brought in by K-9s for Warriors. RCA partnered with the organization and encouraged those attending a press conference to watch Chips, a young yellow lab, in training and development on social media.

On display was the 100-year-old original phonograph used in the iconic RCA Victor logo with Nipper, the mixed terrier, looking and listening.

Bill Thiele, head of retail relations for RCA, has been attending CES for 35 years. It’s been a rough couple of years, he admits, but the show is coming back strong with technology advancements, attendee interest and a general feel of excitement.