Technology takes a stance at Exhibitor2010 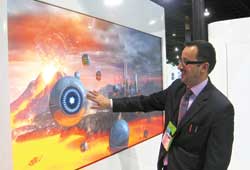 “Isn’t it great that we’re living in a future?” said an attendee as she walked past a digital wall that seemed to come alive. Even for those whose threshold of tech awe had been blown away by the blockbuster “Avatar,” there was plenty at EXHIBITOR2010, the 22nd annual educational conference and exhibition, to expand the boundaries of the worlds where virtual and reality become one.


“The question is how to integrate technology into environments to create a more memorable experience,” said Mike Schaiman, managing partner of Helios Technologies that brought augmented reality and other developments to the show. “If you can use these tools to engage an attendee, it is more likely to create a bond.”

That is one of the reasons behind the explosion of Microsoft Surface technology. It is a multi-touch computer that responds to natural hand gestures and objects with tiny tags, allowing people to interact with the content on the screen and each other. For example, as a person moves a small object with a tag on it around the surface, he can see how a chemical gets absorbed into organ tissue. Companies use it to create guided conversations in their exhibits and learning environments where several attendees simultaneously can touch and learn.

“We find that particularly in the pharmaceutical industry events, attendees like to gather around a Surface table, talk about what they are seeing, and collaborate,” said Trent Oliver, CEO of Blue Telescope that customizes interactive products. “It’s an enjoyable learning experience, but it’s also in-depth and not gimmicky. For most impact, technology has to be woven into the complete message.”

When the purpose is presenting a complex object without shipping it to the show floor, there is now three-dimensional technology that allows an attendee to rotate the object with a touch of a finger as well as examine intricate parts. Inhance Digital created a three-dimensional demo of an airplane engine for Pratt and Whitney’s exhibit at Paris Air Show 2009. The touch-screen display utilizes interactive software, hardware and the iDemo system that features realistic animation sequences. Inhance also works with autostereoscopic three-dimensional monitors, where attendees can put on glasses for a surrounding effect and interact with a digital touch wall.

Kaon Interactive also works with three-dimensional technology, but here, it is part of the “mission control” experience delivered with v-Connect Pro, a virtual platform that brings together experts and attendees in real time, facilitating face-to-face interaction and learning on the show floor, into briefing centers and other environments. While attendees examine the product from every angle by manipulating objects on a screen, they can also talk to an expert through live video and audio feeds, and share their thoughts on a whiteboard in real time.

“With our clients, it’s not so much about telling a brand story but getting them information they want to know,” said Dana Drissel, marketing director at Kaon. “Getting experts to travel to every show can be a challenge, and this technology helps deliver expert insight to the right people.”

Several companies brought their take on the augmented reality. With the help of computer vision and object recognition technology, the information about real world becomes interactive as digital images stored in the computer are applied to a live video feed. For example, a presenter holds a card with a code so that the camera can see it, and a three-dimensional image of a car appears on a screen. Helios Interactive Technologies recently used it for the Yahoo Pavilion at the Winter Olympic Games in Vancouver. The company created a snowboarding interactive game where participants could manipulate a rider on the screen by moving a card in a palm of their hand.

At EXHIBITOR2010, Blue Telescope used similar technology to create a multi-user interactive game where attendees got to name their planets and build a customized experience.

There is a good chance that next Exhibitor show will bring even more advances on the technological front. Helios, for example, is exploring a new holographic printing process that creates a volumetric viewing to static objects, such as being able to see all four walls of a house.

“Every technology we have or are developing is driven by exhibitors,” Schaiman said. “A lot of times they come up with applications to it that transcend industries.”

Yet, ultimately, it comes down to emotions and engagement as foundations of brand loyalty. As Julien Le Bas, creative practice leader for Jack Morton Worldwide, said in his educational session on soft space, “It’s not about design, strategy or production. It’s about orchestration.”