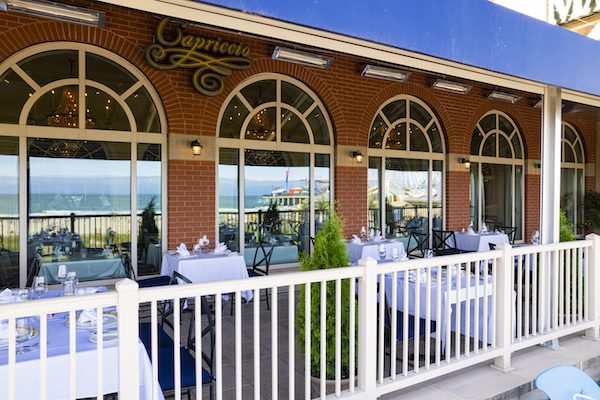 From budget bites to five-star meals prepared by famous chefs, there’s no shortage of dining options in Atlantic City. Comfort food favorites are as in abundance as unique dishes that spring from the creative minds of talented chefs.

For a quick bite before heading back to the show floor, try Mad Dog Morgan’s (2314 Pacific Avenue). This hot spot for sandwiches, burgers and hot dogs got its start in slinging burgers and dogs from a pontoon boat named the Water Weenie. The boat service became so popular that the owners decided to open two stands—one near the convention center and another on the boardwalk.

Another popular and casual dining destination near the convention center, in the Tanger Outlets, is Wingcraft Kitchen and Beer Bar (2010 Baltic Avenue). This gastropub offers quality comfort food, like wings and burgers, but takes it up a notch by using mainly locally sourced ingredients. And its expansive beer list is sure to have something you’ve never tried before.

For a fine dining experience away from the show floor that’s perfect for a meeting with clients, Capriccio at Resorts Atlantic City (1133 Boardwalk) is the place to go. This Italian restaurant has been an Atlantic City tradition since it opened in 1978. With its award-winning service, delicious menu and gorgeous views, it’s no mystery why its tables are full every night.

Casinos top the list of entertainment venues in Atlantic City, and although you can find one practically on every corner, there are a few that are can’t-miss. Popular among tourists and locals alike is Borgata Casino (1 Borgata Way). This casino hotel is a playground for adults. Not only is its gaming floor packed with slot machines and card games, it has dozens of celebrity chef-owned restaurants, nightclubs and bars, and an event center that frequently plays host to nationally known musicians and comedians.

Another hotel casino that regularly tops the list is Resorts Atlantic City. There’s a little bit of history in this spot; it opened in 1978 and was the very first hotel casino to open in Atlantic City. In 2011, it underwent a major renovation, and the owners gave it a roaring ‘20s theme, which is perfect for those who want to recapture the excitement of the 1920s a century later! Resorts Atlantic City offers slot machines, table games, countless bars and restaurants, and the Superstar Theater, which regularly invites popular comedy and musical acts.

The biggest attraction in Atlantic City is its gorgeous coastline. Everything else is just icing on that white sand, sparkling blue cake. But because the beach is such a draw, lots of enterprising businesses sprang up around it to entertain folks who need a little break from the sun.

The Atlantic City Boardwalk is an obvious draw. It stretches for five miles along the coast and offers everything from casinos to exciting nighttime destinations to family-friendly spots. Piers jut out from the boardwalk into the water, each with its own theme. Garden Pier has a thriving arts and culture scene while Steel Pier is the place for adventure seekers to go for rides and carnival games.

If you prefer to stay close to the Atlantic City Convention Center, the Tanger Outlets (2014 Baltic Avenue) are a mere five-minute walk away. The Tanger Outlets is a 109-store open air outlet mall. It spans nine city blocks and boasts tons of popular brands as well as plenty of delicious restaurants waiting for you when your shopping feet need a break.

As a resort town that attracts throngs of people to the shore and casinos every year, there are plenty of comfortable and fun places to stay in Atlantic City. But if you’re looking for convention center convenience, the Sheraton Atlantic City Convention Center Hotel is the way to go. It’s adjacent to the Atlantic City Convention Center, which makes it easy for business travelers to get to and from the show floor, but it’s also close to many of Atlantic City’s attractions. It’s just a short ride to the beach, casinos, restaurant- and entertainment-filled boardwalk and the outlets. For conventioneers who want to grab a quick bite close to their bed after a busy day walking the tradeshow floor, the hotel boasts several on-site restaurants, including the award-winning Tun Tavern.

A fun and convenient lodging spot that will offer a respite from the busy convention center is Resorts Atlantic City. This Mohegan Sun property is located at the northern end of the Atlantic City Boardwalk and is only a five-minute ride from the Atlantic City Convention Center. It has more than 900 guest rooms and suites, and in addition to its 80,000-square-foot casino, it has two theaters, multiple restaurant options and an indoor/outdoor pool.