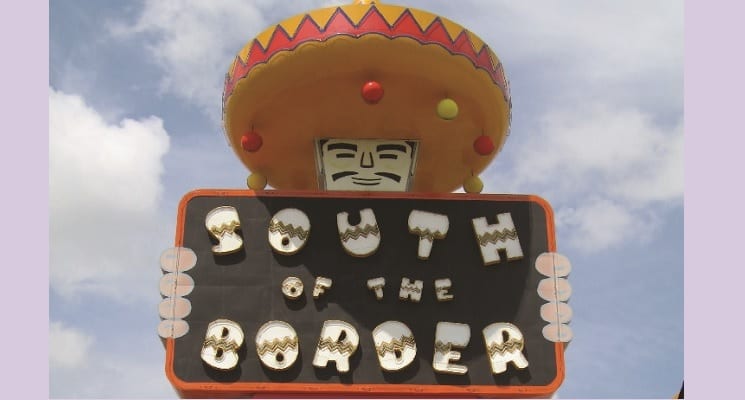 The D.E.A.L.: Pedro’s South of the Border

The D.E.A.L.: Dining, Entertainment, Attractions & Lodging: Pedro’s Features Six Restaurants Among a World of Kitsch–The Peddler Steakhouse Is Worth The Stop

Our shipping/transportation-themed issue wouldn’t be complete without featuring a few amazing truck stops across America. First is South of the Border, a sprawling 350 acres so named because it is just south of the border between North and South Carolina off I-95 and is themed in a campy Mexican style with mascot Pedro the Bandido leading the way. It includes Porky’s Truck Stop, a small amusement park, a miniature golf course, multiple souvenir shops, a 300-room motel, a campground, a 200-foot observation tower with a sombrero shaped observation deck, the largest indoor reptile exhibit in the U.S. and six restaurants, including the sombrero-shaped Peddler Steakhouse. Large statues of dinosaurs to dolphins and other animals are scattered around the property which began in 1949 as a simple 18 x 36 foot beer stand known as the South of the Border Beer Depot. Adjoining the “dry” North Carolina counties, business boomed. A few years later a 10-seat grill was added and the business was re-named the South of the Border Drive-In.

In 1954, founder Alan Schafer added 20 motel rooms and he went to Mexico to establish import connections and brought back two young men who went to work as bellboys. People started calling them Pedro and Pancho and today all their employees are referred to as Pedro (regardless of race, color or creed). Pedro became their mascot, an exaggerated, cartoon-like representation of a Mexican bandido wearing a sombrero, poncho and a large mustache, who can be seen on about 175 billboards–mostly north and south from Virginia to Georgia. They can be seen for miles on I-95, and also on Highways 301/501, 9, 17 and a few on I-20.

At one time there were more than 250 different billboards from Philadelphia, Penn., to Daytona Beach, Fla., all designed by Schafer himself. After seeing billboards for hundreds of miles for Pedro, the 97-foot Pedro, which stands adjacent to the Mexico Shop East and the Sombrero Restaurant, and has four miles of wiring and weighs 77 tons, is quite the payoff. He stands 18 feet deep in solid clay. You can drive your car through the legs of the “Big Man,” as he is known. According to writer Libby Wiersema, “South of the Border is a roadside mash-up of novelty architecture, tacky souvenir shops and wacky attractions. If Las Vegas hooked up with Route 66 and had a baby, this would be it.”

For a quick bite while you’re touring the grounds and seeing the sights, you can visit Pedro’s Hot Tamale, Pedro’s Hot Dog Stand/Pizza & Sub Shop or Pedro’s Ice Cream Fiesta. The Sombrero Restaurant is a family style eatery where, for a minimum donation of $20 to the Shriner’s Children’s Hospital, you can get your name on an orange cardboard sombrero to be placed on the ceiling. South of the Border continues Schafer’s tradition of matching every contribution. The Peddler Steak House, open for dinner only, serves charcoal-fired steaks, prime rib, chicken breasts, savory seafood & hearty salads.