The Hunter Heritage Hallway: Custom Fabrication and Installation by Adcraft By Tim Sitek 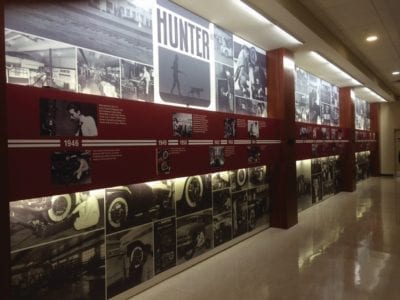 A walk down a 150-foot long hallway at the global headquarters of Hunter Engineering reveals the history of the company. The Hunter Heritage Hallway uses dramatic murals to spotlight the company’s more than nine decades in business since its founding in 1946. The floor-to-ceiling photo montages, along with timelines that highlight milestones, were fabricated and installed by Adcraft Inc. The St. Louis-based company has been designing and fabricating custom exhibits for trade shows, corporate exhibit showrooms, lobby displays and museums since 1933.

Adcraft began working with Hunter on the project in spring 2015. It first produced a test section, a montage of black-and-white images from the company’s archives. Hunter executives were so impressed that they gave the go ahead to trace the company’s roots to today, while also looking to the future.

The corporate exhibit presented a number of challenges for the Adcraft team, which also has done corporate lobby exhibits for companies such as MasterCard and museum work including a special exhibit at the National Museum of Funeral History on “Celebrating the Lives and Deaths of the Popes.”

With thousands of photos, negatives and digital files to comb through, it was no simple exercise. Eric Ramsey, a product manager with Hunter Engineering, sifted through the archives and organized the images by years. He then sent the images out for scans.

Adcraft had to ensure that all finished images met the client’s quality expectations while also looking at how it fit into each decade’s historical presentation. “We required that all of the images be at least 150 dpi at final size,” says Dan Blanton, president and third-generation family member to run Adcraft. “We had to work with Eric on several images particularly from the company’s earlier years that just couldn’t be enlarged. Some we simply changed out for another image and some we were able to increase the resolution to make the image work.”

Every decade included period photos on top and bottom panels. Each panel was then created as a montage of images that covered 58 inches tall by 88 to 118 inches wide, the latter depending on the spacing between columns in the hallway. Every photo was strategically placed to make sure no part of the image cut off parts of equipment or a person. White margins between the black-and-white photos created the montage while also obscuring any seams.

Adcraft supplied prototypes of every section for review. Hunter used 3D models to review and make any needed corrections before Adcraft made prints of the mural sections.

The images for the top and bottom murals were printed on a Canon ImageProGraf Series printer using Sihl SuperSorb microporous paper and 5 mil textured UV over laminate to protect the murals from fading under the lighting and from possible water damage. The murals were then mounted to 6 mil Sintra. The Sintra panels were then laminated to one-inch wooden cleated (butterfly) frames to attach to the wall. In all, more than 400 photos form the montages that are used to show the company’s history by decades.

Photos include Hunter Engineering’s products and personnel manufacturing its diagnostic and service equipment built for keeping cars and trucks on the road. There are also some historic shots. A photo in the 1960s exhibit came from Buzz Aldrin, a close friend of Lee Hunter, the company’s founder. It shows the moon lander and Earth in the background. A handwritten note from Aldrin includes two arrows that say “me” pointing to the land rover and another small arrow toward the Earth that reads “you”. The image also carries Aldrin’s message to Hunter: “Lee’s an engineering buddy who didn’t need M.I.T. With profound respect. — Buzz Aldrin.”

A timeline also runs between the top and bottom panels to highlight major milestones by year in the company’s history. To differentiate from the black-and-white murals, color images are primarily used in the milestone ribbon, along with brief descriptive copy. 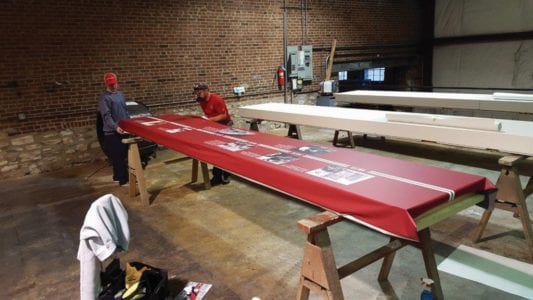 The red vinyl ribbon is made with Avery MPI 1005 EZ RS and laminated with Avery DOL 1380, similar to the vinyl used in car manufacturing. Printing was done on a Mamiki CJV30 – 160, a four-color, wide-format printer. Test prints were done (including laminating) to ensure color match to meet Hunter’s expectations. Once approved, final prints were done and allowed to cure before laminating. The laminated prints were then cut down to the approximate size for installation.

Installation of the timeline presented several challenges. “First, to achieve the desired look, prints had to be in one piece rather than paneled,” Blanton says. “The prints ranged in width from 15 feet to almost 20 feet. Next, the design included a white stripe that went the length of the prints. When we installed the timeline, we needed to ensure that the stripe remained straight throughout each section and also that the placement was the same on each section.” After all, this installation occurred in a hallway that once was part of a manufacturing plant built in 1965 and later converted into office space in the mid-2000s as Hunter expanded.

To ensure alignment, Adcraft laid each section face up on saw horses. Prints were rolled out onto the section and measured for placement, with registration marks made on the vinyl and section. A small section ranging between 3-4 inches was cut out of the middle of the backing and removed. Each print was then aligned to the registration marks and checked to make sure the stripe was straight. The vinyl was then squeegeed to the section to hold its placement. 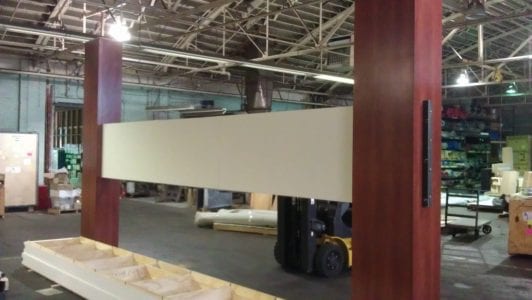 The backing was then removed from one of the remaining halves and gentled laid to ensure the vinyl was not stretched so it prevented any distortion. The print was then squeegeed down so the adhesive would adhere to the section. Adcraft then repeated the process for the other half and then trimmed off excess vinyl.

Additionally, the vinyl wrap can be replaced as Hunter achieves new milestones with each passing year during the current decade and future years

Adcraft minimized disruption by installing sections during off-peak hours. Each of the 13 sections took approximately 3-4 hours per section to install.

The hallway also required Adcraft to come up with some creative ideas. As a former manufacturing facility, the hallway had large support beams. Adcraft fabricated and installed plywood covered with a rich wood veneer to hide the support columns. 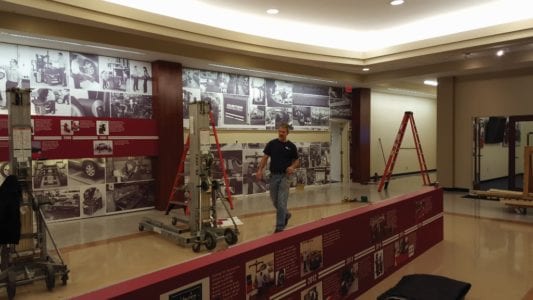 The entire ceiling was redone with a soffit and fluorescent lighting added to illuminate the wall murals. LED lighting in the middle ribbon timeline further accentuates the panels above and below the ribbon. There’s even a cleverly designed bump-out panel with hidden hinges to allow easy access to an existing electrical panel.

Nearly a year in the making, the exhibit was finished just hours before the company’s annual sales meeting last year. More than 600 employees walked down the 150-foot hallway, stopping oftentimes to even see themselves in a photo or two. And it now serves as a red-carpet treatment for visiting customers and business partners, who get immersed in the company’s rich heritage.

Adcraft and Hunter also made sure the company’s story continues to be told. While the company has been in business for nine decades, the hallway has 13 sections between the various support beams that now are covered. Consequently, four of the sections currently feature the company’s three manufacturing and assembly plants in the United States and a global map of its locations and distributors. These sections allow for at least four more decades of history. After that, yet another adjoining hallway provides another backdrop for scores of years.