The Rigging World: In Rigging, Everyone Needs Training & Education 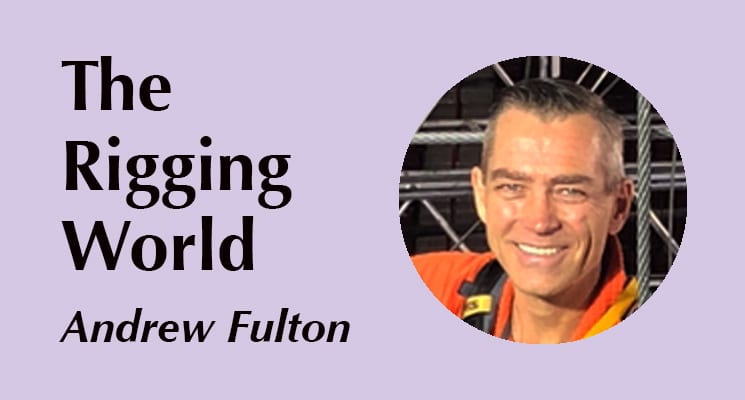 It’s so important for riggers to be trained, educated and certified. But what exactly do you know and understand about rigging or the rigging company that is performing the work on your projects? Far too often clients say that they don’t know anything about rigging; that rigging is a mystery to them. And so, they turn to professional riggers to get the job done.

Rigging is often one of the most expensive components of a job installation—and this is especially true if the rigging is lacking a solid plan or the wrong individuals are managing the rigging. While you don’t need to understand everything there is to know about rigging, there are a few points that you should know to ensure a job is executed safely, is managed efficiently and is more profitable for all. After all, if you’re able to speak and understand the language of rigging, and the rigging company or hired riggers know that you are trained, educated, and able to vet them, then the rigging for your events will be approached in a completely new light and, likely, a higher ethical standard.

My first column, “No Luck Needed When You Rig Safe, Rig Right, & Rig For Success,” was first published by the entertainment industry magazine Protocol (published by the Event Services and Technology Association (ESTA), a non-profit trade association). The Entertainment Technician Certification Program (ETCP) asked if I would write the article about the now infamous LED wall rigging failure, focusing on the crucial need for rigging training, education and certification. Jason Sellmann and I had just started the Las Vegas-based Rig For Success Entertainment Rigging School, and had submitted our training syllabus and course curriculum for review and approval by the ETCP when the rigging failure occurred.

I knew such an article would ruffle some feathers but I decided that the article would be important—a good way to heighten awareness. Our industry needs to learn from that rigging failures in order to prevent them from happening again. After all, whenever and wherever rigging is required for the I&D of building tradeshow exhibits, it’s vital that everyone involved be trained and educated. The riggers doing the work need to be the most highly trained, educated and (hopefully) ETCP-certified.

However, you too, need to be educated and equipped so your level of awareness is increased pertaining to the rigging going on around and above you and your clients. It’s important that when you walk onto one of your jobs and look around, you understand the processes and procedures being employed. As you study the rigging practices, techniques and equipment in use, you want to be able to discern if there’s anything amiss.

If there had been trained and educated individuals on site last spring—those able to recognize the poor choice of rigging hardware being used for suspension of all three LED walls—that accident might have been avoided. Think of the time and money that could’ve been saved, not to mention increased safety, if just one or two people had known what they were looking at. All it would’ve taken was someone to point out the wrong equipment choice and insist those LED walls be rigged differently.

In this year’s The Rigging World columns, we will cover a myriad of topics aimed at educating you and your team on the most efficient and safest ways to approach rigging from the outset of every job, including:

Here’s to an outstanding year in our industry where every job is safer, time is saved and profit is increased. Let us all rig for success!

Andrew Fulton is a longstanding member of IATSE Local 720 and is the lead production rigger at UNLV’s Thomas & Mack Center. He was the lead rigger for PRG at the Sands Expo, Venetian and Palazzo Hotels for PRG from 2012-15 and is the co-founder, with Jason Sellmann, of Rig For Success Entertainment Rigging School in Las Vegas. Contact him at andrew.fulton@unlv.edu .