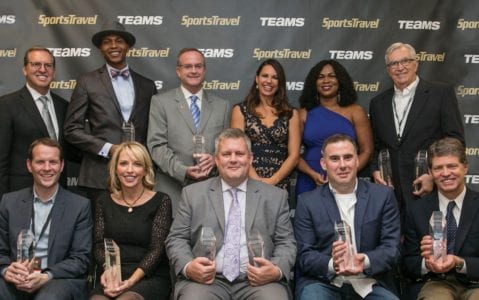 The TEAMS ’16 Conference & Expo—the world’s leading conference and expo for the sports-event industry—will feature a deep bench of industry thought leaders and exciting entertainers, from the legendary to the up-and-coming. Presented by SportsTravel and hosted by the Atlantic City Sports Commission and Meet AC, TEAMS ’16 will be held in Atlantic City Sept. 26–29.

“This year at TEAMS, we’ve raised the bar on the sports-centric educational programming that has become one of the hallmarks of the TEAMS Conference,” said Timothy Schneider, president and CEO of Schneider Publishing, which publishes SportsTravel magazine and organizes the TEAMS Conference & Expo. “By delving into timely and pertinent topics confronting the industry, we’re advancing our commitment to providing the most indispensable sports-business development opportunity of the year.”

General sessions at TEAMS ’16 will include insights on the phenomenal growth and potential of eSports; a keynote from Joe De Sena, founder of Spartan Race; a panel of Olympians on how to create athlete-centric events; and a live Q&A with Katrina Adams, the chairman, president and CEO of the U.S. Tennis Association. In addition, more than six dozen industry practitioners will lead five tracks of specialized educational sessions on technology, event operations, host cities, sponsorship, and law and ethics. These sessions will examine topics that include event security, innovative sports strategies in sports tourism; the new age of content distribution; doping in sports; best practices for selling sponsorships; and starting a sports organization or event from scratch.

In addition to educational programming, TEAMS ’16 will offer numerous opportunities for networking, including the Event Organizer Marketplace, a reverse trade show that augments the TEAMS Expo. More than 10,000 business appointments are already scheduled to be held during the TEAMS Expo. TEAMS ’16 will also feature the presentation of the 2016 SportsTravel Awards at a gala emceed by sports broadcaster Bonnie Bernstein.

TEAMS ’16 will also showcase an impressive roster of entertainers including the Emmy Award–winning a cappella group Tonic Sol-fa; DJ Spinderella from the Grammy Award–winning Salt-N-Pepa; The Drifters, named by Rolling Stone magazine as one of the greatest musical acts of all time; and Antigone Rising, an all-female, alt-country band that’s an East Coast favorite. The newly crowned Miss America, Savvy Shields, will welcome attendees and serve as a presenter during the SportsTravel Awards.

The TEAMS Conference & Expo will be held at the new Harrah’s Waterfront Conference Center, which adjoins Harrah’s Atlantic City Resort. For more information on TEAMS ’16, please visit TEAMSconference.com or call (877) 577-3700.