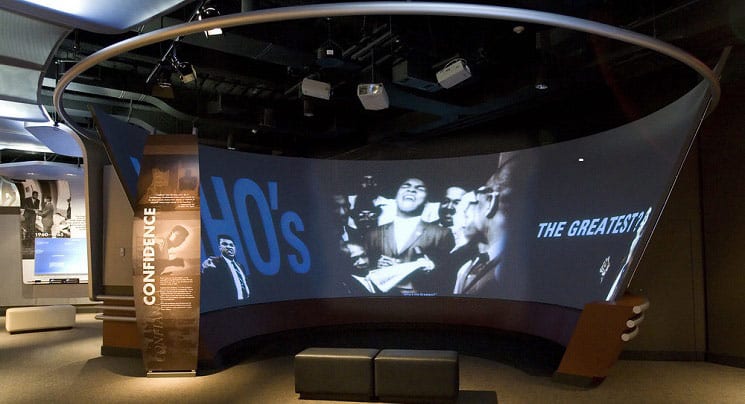 Tradeshow Exhibits and Museum Exhibits Have a Lot in Common

Many Designers and Builders Work in Both Industries, by F. Andrew Taylor.

“I’ve worked on everything from retail to stand alone kiosks,” the independent drafter/designer says. “I’ve even drawn out the plans for an 82-foot rocket ship for a museum in Kuwait. It was a one-to-one model of the Ariane 5 rocket that puts satellites up”

Beaudry is one of many design and build specialists who have a foot in both the world of tradeshows and exhibitions as well as the museum world. He got his start in Hollywood, the architectural department of Hollywood video that is. He cut his design teeth doing floor and space planning for three years before moving on to an exhibit company.

“The first thing they put me on was an interactive unit that simulated the inside of a car,” Beaudry says. “As you worked the controls, different things popped up on the screens.”

He worked in the exhibit company for 11 years before it went under. Within two months of that company’s closure he had established himself as an independent, mostly working from home at his new company, Five22 Drafting.

“I do engineering drawings and detail drawings, whatever is needed to build everything” Beaudry says. “I also do set up drawings, showing how to put the pieces together, parts and piece drawings for CNC cutting, water jet or laser cutting. A lot of times I’ll create flattened elevations for the graphics department.”

He works about 30 hours a week for Formations Inc., a Portland, Ore.-based firm specializing in planning, design, fabrication, and installation of interpretive exhibits and thematic interiors.

“We have always been focused on museum work, but a lot of the people who work here have some crossover with tradeshow exhibits,” says Chad Jacobsen, an exhibit designer with the almost 30-year-old company. “It’s all custom work, solving new problems every time.”

Formations Inc., has a prescribed step-by-step process for the designs that takes their clients from rough concept and sketches straight through to signing off on the order to proceed with fabrication. From there, much of the work is done in-house, although they still contract out for some specialty items, such as sculptures and dimensional maps.

“A lot of our clients know their subject matter extremely well, but they don’t necessarily know how to get that message formatted in a way that visitors can understand and appreciate.” Jacobsen says. “That’s why places like the Wright Brothers Visitor Center at Kitty Hawk N.C., the Klondike Gold Rush National Historical Park in Skagway, Alaska and The Muhammad Ali Center in Louisville, Ky., call on us.”

It takes Formations about 18 to 24 months from concept to installation on an average big project, with some variance depending on the complexity of a project. They currently have 40 different projects in various stages in the shop. Once the approved concept drawings go to a drafter/detailer like Beaudry it’s up to that person to work out how the interactive elements will work and how it will be constructed.

“For example, if I’m working for a client and they need an interactive design where the visitor needs to grab handlebars and turn them, I have to work out how that motion translates into a model airplane a foot in front of them and two feet in the air in an acrylic sphere attached to the wall,” Beaudry says. “I have to work out all the mechanics of how it works, what do we build it out of, how to make it durable and how to change out or repair parts. They’ve got to be able to get into it easily, but not allow kids to get into it easily.”

Professionals in the industry must be experts in a wide variety of materials, including every type of wood, plastic, glass, acrylic metal, fabric and a variety of new materials coming to market.

“Exhibit engineering is the bridge between concept and reality,” Beaudry says.

Debra Roth and Marc Posnock, the principals of Originators, a New York City-based company specializing in design and fabric structures both worked with the exhibition industry at times. They don’t seek that work out anymore, preferring to concentrate more on live marketing and activations.

“We have a lot of experience in the exhibit world and for whatever reasons, they just never understood how to use our creativity,” Posnock says. “We’re not interested in doing tri signs and circle signs and stuff like that. Everybody does it. If it’s sculptural or artistically driven on the other hand, we’re definitely interested.”

They’re more interested in carving out a space with fabric sculptures or meeting unusual challenges presented by the museum world. For example, the company was recently called on to solve an issue with an architectural issue at the Museum of Jewish Heritage in New York City.

“There was this huge expensive curved glass brick wall near the entrance,” Roth said. “From the outside, it looked like a security grate, so people couldn’t tell that it was open. They would walk right up to the doors, stand there looking inside and turn around.”

“It was a great solution and it clearly revealed that the museum was open for business,” Posnock says. “It was a very interesting challenge and very satisfying. On the surface it looks very clean and simple but the nitty gritty of it was very complex.” 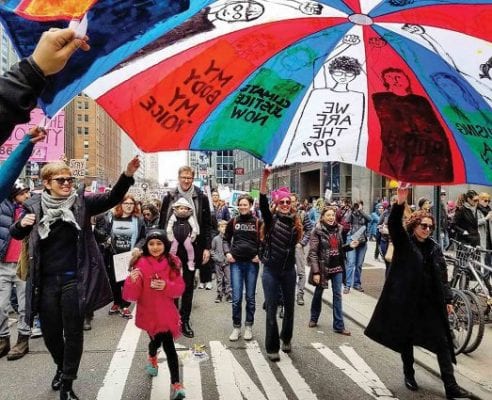 Another outside-of-the-box problem they needed to solve was what to do to display a fabric piece that had been donated to be included in an exhibition on the history of women’s suffrage in New York City that the Museum of the City of New York was having installed. The piece was what is called a parachute and it was painted with images representing a century of the women’s movement. It had been used in a recent parade, with several women holding the edge and the wind created by the motion of the marching billowing out the fabric into an elegant dome.

“It was the perfect artifact to include in the display, but the question was how to present it so that it has the impact and retains the simplicity and look of the piece in full billow,” Posnock says. “If you just hang it, it’s going to be an ugly, saggy thing.” 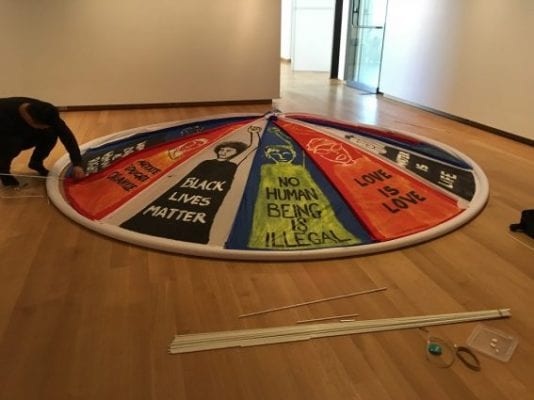 The museum staff suggested stretching it on a circle but that would have presented the same issue of sagging. Originators voiced strongly that the piece had to be displayed in a dome, as it had been in the parade, but the museum was concerned with the cost of fabricating and the elaborate, custom made structure to support it in that shape.

“We work with fabric all the time, so we suggested lightweight Fiberglas rods, handling it like a tent,” Roth says. “That required a little sewing, but I told them I could sew it in a way that you’ll never know I did it. We had to get permission from the donor to alter it, and they approved so that’s what we did.”

The final piece sits as a dome on top of a room constructed with curved walls with displays. Light passes through the fabric structure helping the relatively small space not feel quite so claustrophobic.

In the early ‘90s, Roth and Posnock were friendly competitors, owners of the only two companies working primarily with fabric for event displays. When Posnock’s partner decided he wanted to focus more on tradeshow exhibition, he sold his part of the company and joined forces with Roth. Both drew their inspiration from Bill Moss, an industrial designer and fabric artist who, in 1955, originated modern stretched fabric tent designs. Like those tents inevitably led to stretched fabric walls seen at nearly every event today, there’s been a lot of cross pollination over the years between museum exhibition and trade show exhibition to get to where things stand today. Both sides have benefitted from learning from each other.