Trailblazers of Yesteryear: Fred Kitzing: The “Father of Tradeshow Marketing” 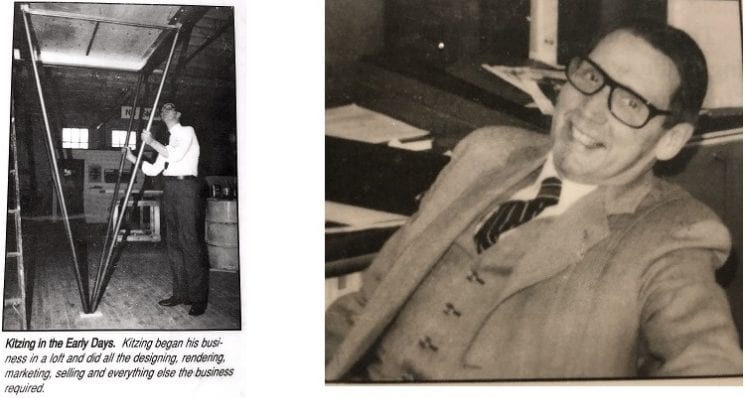 For more than five decades, Fred Kitzing was a seminal thought leader in the exhibition industry. KITZING, Inc. (a.k.a., The Trade Show Marketing Agency) was one of the most substantial exhibit design and building firms in Chicago and its owner/founder was a rogue, entrepreneur, fine artist, philosopher, designer, marketing thinker, salesman, innovator and rule-breaker.

From 1950-1993, KITZING Inc., was among the companies that defined an industry. Kitzing, along with other Chicago industry pioneers including Michael Grivas, Robert Ferks, Leo McDonald, and Otto Stegemann, built the foundation of the industry instrumental in establishing the EDPA in 1952 and the Trade Show Bureau (now CEIR).

Kitzing was a unique character. Always properly buttoned-up and dapper and always busting his buttons to try something new. He designed all of the furniture, including the clocks for which he had a passion, in his office and home. He wore custom-tailored three piece suits with a glided pocket watch, chain and fob. Round, rimless spectacles adorned his often pursed brow as he ruminated on yet another client strategy. In his proper, traditional dress, he always looked freshly returned from lunch with Henry Ford and Thomas Edison. But the truth is, he often ate at his desk, eating straight from a can of tuna, in spartan fashion. He worked six days a week. It was his way, because his work was also his passion.

Among his few indulgences was his passion for horses, which he once stabled out in Oak Brook at his home next door to Michael Butler of polo, Butler National Golf Course, and Hair fame. Despite his conservative appearance, Kitzing had disarming flair and humor; but he could also be impatient and exacting. He marched to the beat of his own drummer. In between one of his several marriages, Kitzing took up residence in the KITZING office building. Early-arriving shop personnel reported sightings of Kitzing working out punching a speed-bag or running the stairs in his birthday suit — as one did in a bygone era.

Kitzing was a fine arts graduate at the Art Institute of Chicago. Upon graduation, he took a job as an elevator operator at Chicago’s old Lutheran (General) Hospital that he was delighted to boast was “his favorite job of all time.” While there, he received a call from the American Meat Board to paint some signs for an upcoming trade show. Kitzing took the assignment, the Meat Board became his first and forever client, and his trade show career was born. In the early days, his partner was Tak Matsui. They built exhibits in a small studio and painted them in the alley behind the building. The year was 1938.

It was a bootstrapping industry and for many years KITZING’s neighborhood was transitory, so Kitzing would keep a gun in his desk to ward off unwanted visitors to his front door.

A turning point came for Kitzing at a trade show at which he saw a juxtaposition of exhibits that sparked an “aha moment.” As he was gazing upon a substantial, elegantly embellished exhibit, that gaze was arrested by what he saw across the aisle in a small 10 x10 exhibit. A solitary guy there was drawing a huge, frenzied crowd, which dwarfed that of his behemoth neighbor. The fella in the tiny exhibit was demonstrating a slice-it-dice-it-gizmo that was mesmerizing the crowd. And, he was writing orders as fast as his busy hands would allow.

That’s when Kitzing had the epiphany that a trade show exhibit was (his words) “a  machine for selling in.” From that day forward, he defined the key trade show challenge—to attract and close customers. From this, his turnkey system of trade show selling evolved: pre-show and at-show promotion to attract the target audience, the proper training of show staff around objectives—methods—and strategy, approaching and engaging the customer, qualifying through pocket lead cards, processing, delivering the message/selling and closing. The pre-show training and systematic collecting and processing of leads to close was what got it done.

Developing dramatic attractions (inspired by the gizmo guy) became a KITZING hallmark. Kitzing started with magicians—among them the fabled Marshall Brodien of “TV Magic Cards” fame. The magicians dazzled as they integrated product messaging into their memorable magic tricks. Ever improving upon that model, Kitzing began to design attractions to dramatize key product features. His first was for Acme Steel in the early 1950s. Two of the most memorable were an ice skater who skated on a client’s new frictionless plastic to demonstrate this benefit, and the trampoline artist who did flips to dramatize the special hold-in-place property of a client’s new spring-loaded safety glasses, guaranteed not to slip at any angle.

Out of this ground-breaking work, Kitzing mentored and developed later known industry experts including sales trainer Allen Konopacki, and Elaine Cohen of Live! Marketing. To make his clients successful, Kitzing gave much of this programming away to create the value-added and the “KITZING difference.” The philosophy—sales make for happy customers and happy customers stick around.

KITZING was known for forward thinking, client service, and most important to its owner, selling. Like his counterpart in advertising, David Ogilvy, Kitzing believed that selling was his primary mission. He was a natural salesman and enjoyed selling and training others to sell. He delighted in both. And would laugh as he regaled those he mentored with classic selling stories. 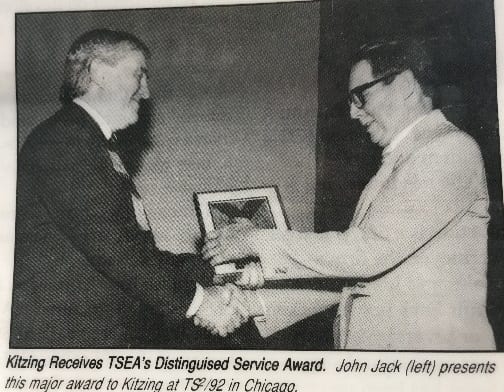 KITZING closed its doors in April of 1993. But before that, Kitzing had been honored with the EDPA Hazel Hays Award in 1983, an International Exhibitor’s Association’s (IEA) Distinguished Leader Award winner in 1992, and was a recipient of much industry recognition, including that for his authorship of many key seminal industry think pieces. Over his robust career Kitzing truly earned the title “The Father of Trade Show Marketing.”

In his time, he was the trade show industry’s version of Steve Jobs, Elon Musk, and Richard Branson all in one. He fought his entire career to make trade shows a legitimate part of the marketing mix—one which deserved much more careful attention and investment. Fred Kitzing left an indelible mark on the industry. He was one of a kind.

Doug Stevenson MM, MSc began his career at the Leo Burnett advertising agency and was introduced to the exhibit industry at KITZING, Inc. With more than 20 years in the business, he is also a writer, consultant and trainer in the areas of creative process, innovation and team-building. He can be contacted with your stories at doug.goodideas@gmail.com.