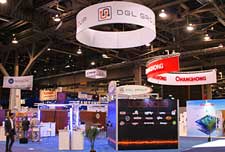 Although attendance was strong at the 2010 Consumer Electronics Show compared to its 2008 and 2009 editions, exhibitor participation was still contracting in 2010 despite claims the recession was receding. Managers of the annual Las Vegas technology extravaganza were optimistic, however, saying now that attendees were back (2010), the exhibitors would follow in 2011. They were right.


Held at the Las Vegas Convention Center, January 6-9, the 2011 International Consumer Electronics Show (CES) attracted 2,700 exhibitors from across the globe compared to 2,500 in 2010, representing an increase of 8%. Preliminary figures indicate that about 140,000 industry professionals attended the show compared to 126,641 last year, an increase of 10.5%. About 30,000 of those attendees were deemed international.

The official attendance numbers will not be available until spring and final audit numbers may differ from the preliminary estimates. Owned and produced by the Consumer Electronics Association (CEA), CES is the world’s largest consumer technology tradeshow.

“Exhibit space totaled 1.6 million net square feet compared to 1.4 million in 2010,” said Allison Fried, public relations spokesperson for the CEA. “This year we were just about at maximum capacity for the Las Vegas Convention Center (LVCC). There literally wasn’t any more space that we could have sold to exhibitors this year.”

CES 2011 sprawled across the LVCC’s Grand Lobby, North, Central and South Halls, and the Hilton, Renaissance and Venetian hotels. The Venetian provided a multitude of suites for high performance audio vendors and more than 90,000 square feet of press conference space. Fried added that it is possible CES may find itself once again spilling over into the Sands Convention Center. CES vacated the Sands a couple years ago following the expansion of the LVCC’s Central Hall.

“The Las Vegas Convention Center is a phenomenal facility, but there is only so much space here,” Fried said. “It’s not confirmed, but we could find ourselves once again at the Sands in the future.”