Andy’s Apps: Getting Around (or Housebound) with Google Lens & Hound Apps 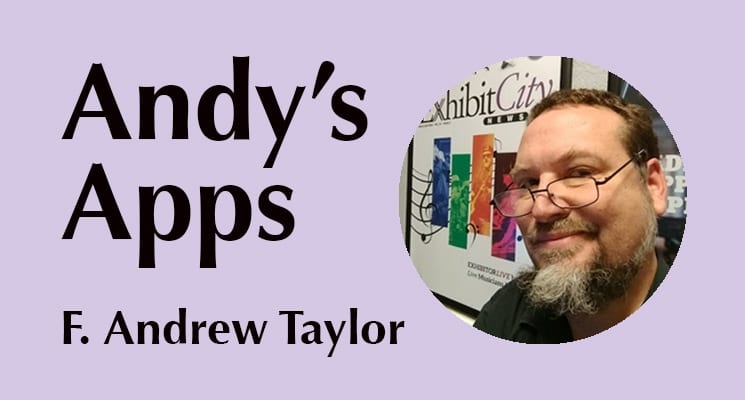 One of the most versatile apps for the exhibition industry is one you probably already have on your device.

Google, and its suite of apps has become the workhorse for many industries. In fact, I’m writing this article the same way I write most of my articles: on Google Drive. In addition to Google Drive I regularly use Gmail, Google Maps, and Google Calendar. I store photos I take with my phone on Google Photos and, of course, googling, because “Yahooing” isn’t what people say or do.

Recently I’ve become dependent on Google Lens as I work on a project trying to identify the location old pictures were taken in. Google Lens is simple. Aim your camera at a photo and the app compares the image to millions in its database and takes an educated guess at showing you pictures of the same thing. It’s a touchy procedure and can take some massaging. It’s very good at identifying unusual buildings and popular tourist destinations. It’s less reliable at identifying other things, for instance, statues. All statues are more or less the same to Google Lens, whether it’s of a man, a woman or a fish. But if you find yourself trying to identify where you or a co-worker were from a photo, you’ve got a decent shot of doing so with the app.

Among the more useful features of the Google Suite is their interconnectivity. Gmails featuring scheduled events can be set up to automatically go on your Google Calendar. With Google Maps you can set it to track your location at all times and create a map of where you’ve been and the route you took. That timeline also shows you the pictures you took in each location. Have you made a bunch of stops while going about your tasks gathering the last-minute items for an event? Google Maps timeline shows you anywhere you stop for more than a few minutes, allowing you to easily retrace your steps to find where you misplaced that folder of TPS reports.

I’ve found that I’m so reliant on Google’s Suite that when I recently started using a new app, it frequently redirected me to them.

Hound is a voice-powered digital assistant, much like Siri or Alexa but with less personality and more speed and a fair amount of accuracy. For example, I asked it the quickest way to Springfield and it showed me the Springfield nearest to my current location and not any of the other 32 Springfields. It offered me a Google map to get there, but there was no voice command to open it. I had to press a button like it was 2019 or something. It didn’t fare as well when I asked it where the nearest convention center was. It made suggestions of places several hundred miles away and even on the other side of the country using the Bing search engine. When I asked Google the same question it gave me the right answer: in Springfield.

By the way, you can also ask Google questions by voice, but you have to push a button before you do. Buttons? You can ask Hound where the nearest hotel is and it answers almost before you finish the sentence. Likewise when you ask for the weather. It will call you an Uber but it only provides a link to Lyft.

In general, I found Hound to be pretty functional, but still working out a few kinks. It doesn’t appear to always be listening, like some other VPDAs. Unless it’s on your screen and you say “Okay, Hound” it doesn’t do anything. There are good and bad aspects to that. It does require you to have it in mind before you use it, but it doesn’t answer random questions because it thought it heard its name. Also, it doesn’t appear to be listening to what I say and pushing ads for those things.

Like most VPDAs it will respond to ridiculous questions with a calm, deadpan demeanor. For example, it did tell me “what does the fox say,” but for an app named Hound, its bark (woof, woof) was worse than its byte.

Andrew Taylor is an award-winning journalist, artist, photographer, cartoonist and illustrator. He’s been in the journalism field for 23 years working for alt-weeklies, tourism publications, hyper-local papers, etc. He also works in film production, does local historical research and has been an amateur stunt driver and rodeo participant. He’s the illustrator for “Christmapus,” the tale of the Christmas Octopus. His first fiction prose story was published in 2018 and was featured at the Vegas Valley Book Fair. This column was written from a secret bunker in rural New England during lockdown. Contact him at fandrewt@exhibitcitynews.com