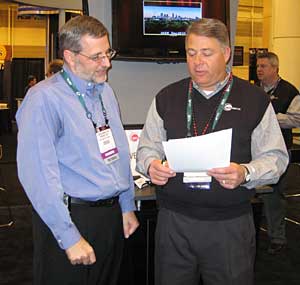 With 2010 drawing to a close, meeting planners aren’t taking an early vacation. Instead, they are booking business in Atlanta. At this month’s International Association of Exhibitions and Events (IAEE) convention, Texprocess Americas, the leading international tradeshow for processing textile and flexible materials, signed a letter of intent at the Atlanta Convention and Visitors Bureau (ACVB) booth for 2014 and 2016.


The most recent booking adds to an already stellar year for the city, where room night bookings went up 33 percent from 2009.

While ACVB was working toward a strong future of business, this year’s conventions were nothing short of successful. The city held 19 citywide conventions in 2010; a record for the city. Getting attendees to these meetings was key in a year where attendance projections were tenuous after a fragile 2008 and 2009. At the close of the year, 25 of the 33 largest conventions that met in Atlanta in 2010 met or exceeded their attendance goals.

“2010 proved to be a banner year,” said William Pate, president and CEO of ACVB. “In partnership with the meeting planner, our staff was focused on getting people to the conventions through marketing and public relations efforts. Atlanta has the offerings that customers are looking for and now that the economy is improving, we’re seeing convention travelers come back.”

The medical meetings industry was particularly strong for Atlanta this year, with five medical meetings in November alone. Medtrade 2010 exceeded attendance estimates by 38 percent, attracting 11,756 attendees and exhibitors to the show. Successful attendance numbers played a role in further bookings for ACVB. This December Medtrade committed to Atlanta in 2014.

“We definitely feel Medtrade 2010 was successful,” said Kevin Gaffney, CEM, Medtrade Group show director. “Medtrade attendees and exhibitors enjoy the business-focused environment that is present in Atlanta. Ease of travel, plentiful venues for entertaining, and the support and efficiency of the Georgia World Congress Center staff all contributed to the overall success of the event.”