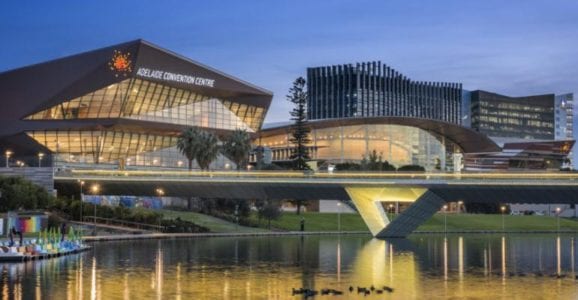 Australia’s first convention center, the Adelaide Convention Centre, has just received a two-stage, $397 million upgrade, which officials say was completed nearly 30 years to the day after it first opened.

The centerpiece of the Adelaide Convention Centre revamp is a state-of-the-art, 3000 square meter Plenary Hall. With a 3500-seat capacity, the hall can be divided into more than 15 configurations to accommodate a wide range of conferences, exhibitions, banquets, and other events. The facility in the center’s East Building features the world’s largest rotating seating platforms, which can be rotated 180 degrees within minutes. It also features tiered hinged seating stored in the roof, which can be lowered to convert the room into a theatre-style auditorium, along with operable walls, which can be used to subdivide the space or retracted to open up the Plenary to full capacity.

Following a nine-year journey towards renovation, the venue marked the culmination of its two-stage redevelopment with an extravaganza to celebrate the opening of its new East Building—the second and final stage of the venue’s expansion. Adelaide Convention Centre Chief Executive Alec Gilbert said the building’s new features made it one of the most flexible convention centers in the world. “The opening of the East Building doesn’t simply mark the completion of the expansion of the Convention Centre, it marks the start of a new era for our world-class, state-of-the-art facility,” he said.

The first major event that be held in the newly expanded Adelaide Convention Centre is the International Astronautical Congress scheduled for September. As the world’s largest annual gathering of space professionals, with more than 3,500 delegates expected to attend, it is the largest event of its type ever hosted in Adelaide. One of Australia’s most significant convention centers, officials say the venue has played host to over 1800 conferences, welcomed more than six million delegates and guests, and delivered in excess of $1.4 billion in economic benefit to the state of South Australia over the past three decades.