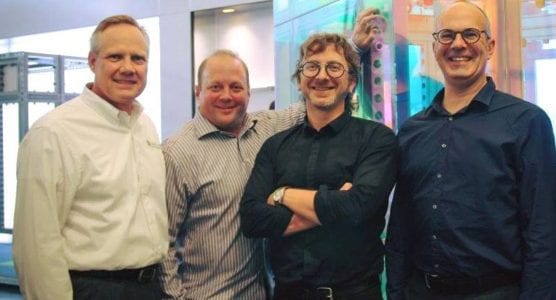 “As beMatrix continues its monumental global growth we felt this was the opportune time to assume responsibility for the uniformity of the beMatrix brand worldwide,” explains Van der Vennet. “We are thankful for Lance and Robert introducing the ‘original frame system with holes’ to the U.S. market in 2000 and for the growth they were able to attain.” Over the past 18 years, beMatrix has become the exhibit rental system of choice for many of the top exhibit, event and general contracting companies in North America.

“Our knowledge of the North American market, combined with beMatrix’s continuous commitment to innovation, has been a recipe for success as evidenced by Red Dot Design Awards in 2013 and 2017, as well as inclusion in the Inc. 5000 list (#1,580) in 2017,” says Laarhoven. “We are proud of what we have accomplished together, and I look forward to being a part of our continued success.”

beMatrix, headquartered in Roeselare, Belgium, with production facilities in Roeselare, Norcross, Ga., and Hangzhou, China, and sales and distribution offices in 61 countries, manufactures a Tooless, reusable frame system for the exhibit builder, general contractor and event producer industries.  The same aluminum frame accepts both hard panel and fabric infills. Combining its new 360° Design initiative and Tooless approach, The System is recognized for its quick and easy construction of walls, ceilings and floors. Used worldwide for exhibits, events, pop-up venues and displays, The System is complete with straight and curved frames, doors, counters, lighting and wall mounting accessories.  The System is considered environmentally sustainable, providing endless reuseability as the same aluminum frames are continuously reconfigured and redesigned into new structures. The beMatrix factories support complete sustainability by recycling 100 percent of all waste created during the fabrication process. For more info, visit www.bematrix.us.