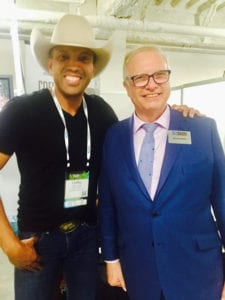 There is an energy groups of people bring to an event.  BizBash L.A. 2017 brought energy and passion to the forefront along with a new state of conference offerings meant to inspire and inform.

BizBash L.A. 2017 talked about and showed us the latest developments in a radically changing industry. The event was held at The California Market Center, July 19.

David Adler, founder and CEO of Biz Bash (at right with a tall Texan) opened the BizBash LA Forum by quoting from a Frost and Sullivan study. He referenced the fact that there are 5 million meetings and events globally every year. This means teams are brought together to effectively create the events. It is a large industry.

Biz Bash is telling us that the smallest things at events make a huge difference, to treat sponsors like rock stars, to get the audience involved, how to make it all work. Adler has certainly shown how to make it all work. The general consensus of the LA 2017 Forum contributors was event producers need to figure out why each event needs to happen, what the message is, pinpoint goals, define success. With this information a workable plan will come together. 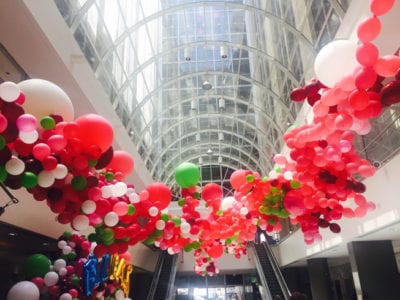 Jeff Olsen, director of special events at Children’s Hospital Los Angeles Foundation, was very impressive when he spoke of how to make an event stand out. Jes Gordon, owner of Proper Fun talked about how to incorporate marijuana into events. Christian Lachel, executive creative director, BRC Imagination Arts. talked about how branded experiences are pivotal to creating on going relationships. Ashley Crowder, Vantana, spoke about the hottest areas of event technology and how to incorporate them into events. 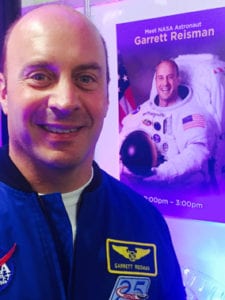 Then there were all the amazing exhibitors on the floor, those who supply the event industry. Leading the way into the event and registration was an outstanding balloon display by BalloonZilla (above) in Irvine, Calif. The California Science Center invited the resident NASA Astronaut, Garrett Reisman (photo left), to visit the booth. It was inspiring to speak to a man who has traveled out of the world we walk in. Not only has he walked in space, he lived at the bottom of the ocean for two weeks on NEEMO. Of course, the Endeavor lives at the California Science Center. 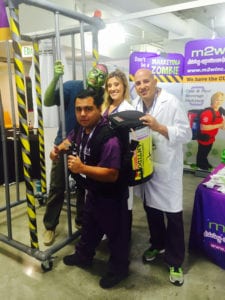 Ron Pequeno, director of new business, AKA Marketing Wizard, M2W, a brand experience marketing company,  changed into a scientist at his BizBash LA booth. The booth  elaborated on how to survive a zombie outbreak (photo right). He had a zombie there, he had scientists as part of his activation.  As one way of surviving a zombie outbreak he had one of his staff roaming with a Sangria bar backpack. Ron offered all attendees a Zombie Outbreak survival kit. 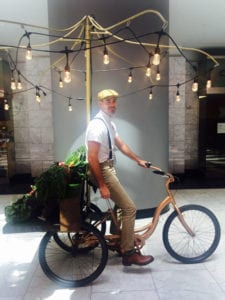 The Champagne Creative Group  provided a guiding light with the a fresh produce bike in the lobby (photo left). This group had a presence in almost every part of the show. The Champagne Group is a Las Vegas Company worth looking up. Extremely creative activations. The Fill R Up Gastro Garage chefs were back introducing torched kabobs. A very talented country singer entertained at lunch and on the floor. He calls himself the Tall Texan, his name is Coffey Anderson. .

There was a stage on the exhibit floor at the California Market Center that featured, at one point, the editors of BizBash talking about new ideas for event producers, there was entertainment and much more on this stage. We tried to be everywhere. As those of us who work these events know it is just not possible when so many valuable activations take place in one day.. These are just a few of the amazing things we saw and experienced at Biz Bash and on the event floor this year. It is well worth attending.

The next Biz Bash is in New York. Check out the website. The company also produces a live event in South Florida.