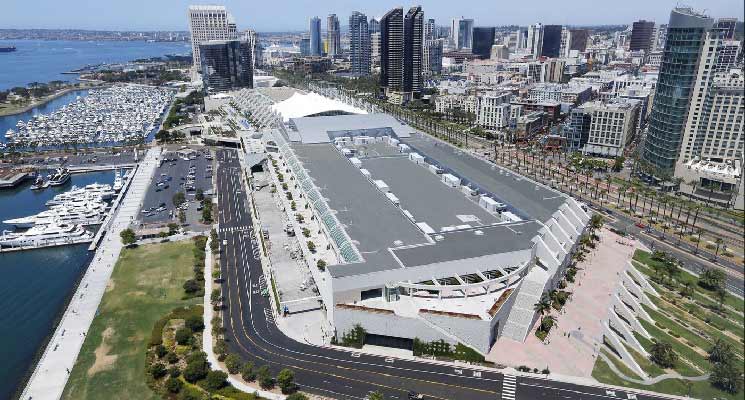 With shows such ADS International, Comic-Con and CEDIA Expo making their homes in Southern California, San Diego is steadily reinforcing its position as a player in the international  tradeshow and convention landscape. In response to the growing demand, the City of San Diego is planning to take control of an unoccupied bayfront site known as Fifth Avenue Landing into which it intends to expand the existing San Diego Convention Center. Although unoccupied, the land is part of a leasehold agreement where an expansive hotel complex is currently planned.

However, with more than 2,000 hotel rooms currently under construction in the city, government officials are reassessing priorities, and their focus has come down on the convention space. Working in tandem with the Port Authority, the City of San Diego is anticipating filing motions next month that will clear the way for a $5 million initial payment on Fifth Avenue Landing, paid directly by the Port of San Diego.

The move is part of a long-held plan for expanding the SDCC, and the decision to finally pull the trigger was originally made on the understanding that November’s ballot would contain a question to increase the tax placed on San Diego’s hotel rooms as a means of supporting the project. However, the San Diego County Registrar of Voters believes that the initiative was filed too late to make it onto November’s ballot. Nevertheless, officials claim they are on track to place the $5 million down payment in the coming weeks.

But the $5 million price tag is only the tip of a much costlier iceberg. The initial estimate for the entire project was around $33.2 million, but concerns remain in San Diego whether all three parties will stick to their original agreement. Accord is likely, however, as the expansion of the SDCC is but one component within a citywide rejuvenation project, and nothing seems to be stopping that juggernaut. Known as “Yes! For A Better San Diego,” the project is tackling the city’s most pressing concerns by reducing homelessness, improving roadways and creating more than 7,000 new jobs. The project’s official report also reveals that expanding the SDCC could improve the regional economy, “by more than $40 billion,” as well as ensuring the likes of Comic-Con doesn’t look for bigger venues in Orange County and Los Angeles. It’s a lot of money, but the full ticket price will not be paid for through taxes, but will use visitor revenues, and of that there is plenty in the coffers. In 2017 alone, outside traffic accounted for $10.8 million, with projections for 2018 set to equal if not build on this number.

However, the expanded SDCC is far from a done deal. In an official statement to the San Diego Tribune, Port of San Diego Chairman Rafael Castellanos acknowledged that further discussions are needed before actual work can begin in earnest.

“As a longtime supporter of this economic development project,” explains Castellanos, “the Port plays an important role in the financing plan that will help make the convention center expansion a reality. Following action by the San Diego City Council, the Board of Port Commissioners will take action at its Oct. 23 meeting to acknowledge that requirements related to the purchase and sale agreement have been met. In the meantime, the Port will collaborate on determining next steps with our partners at the city and Fifth Avenue Landing.”