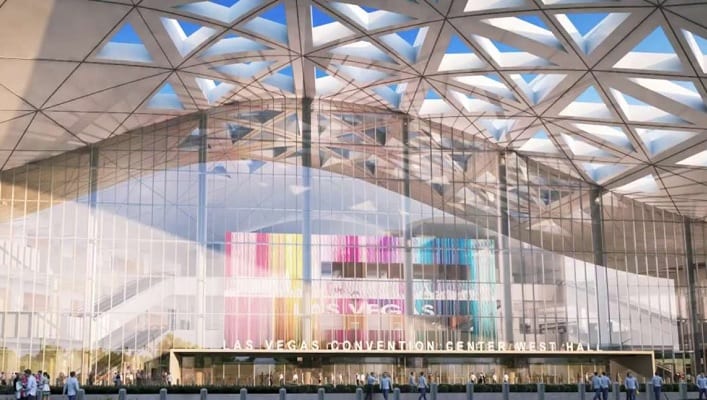 Location: 3150 Paradise Rd, Las Vegas (one block east of The Las Vegas Strip, on the site of the Las Vegas Park Speedway, a failed horse and automobile racing facility from the early 1950s)

Renovations & Expansions: Completing their 14th renovation in Dec. 2000, they added 1.4 million sq.ft. with the new West Hall and an underground tunnel. In 1971, $7 million went to rebuild, remodel and expand; 1998’s expansion increased the center to 1,900,000 sq.ft. and they imploded the closed Landmark Hotel and Casino to add parking; in 2002 they built South Hall, adding 1,300,000 sq ft., and four bridges to cross over Desert Inn Road; in 2010 they added a Metropolitan Police Substation and a Clark County Fire Station (becoming the only facility in the country with these on-site amenities at the time) and in 2015 they spent $182.5 million to buy the Rivieria Hotel and Casino (which they imploded in 2016).

Ranking: Third largest convention center in the U.S. (after Chicago and Orlando); it was the first facility in Nevada to receive the Global Biorisk Advisory Council (GBAC) STAR facility accreditation.

Fun Fact: The LVCC Loop, the underground tunnel developed by Elon Musk’s The Boring Company, was designed to shuttle convention attendees throughout the 200-acre campus in all-electric Tesla vehicles, and debuted in June 2021.

Fun Fact #2: The LVCVA has 90 percent of its vehicles being powered by electric or propane. With a generous grant from the Consumer Electronic Association, the Electronic Vehicle Charging Station debuted at 2014 International CES.

Operations: Owned and operated by the Las Vegas Convention and Visitors Authority, the LVCVA board includes elected officials and six reps from the private sector. Clark County and the city of Las Vegas each have two reps, while the cities of North Las Vegas, Henderson, Mesquite and Boulder City each have one seat. Private-sector members, nominated by the Las Vegas Chamber of Commerce and Nevada Resort Association, represent the hotel industry and general business interests. The LVCVA board is considered to be one of the most successful public-private partnerships in the country.

Our Las Vegas Convention Center spotlight just wouldn’t be complete without highlighting a few more convention spaces in the city. After all, the Venetian Expo & Venetian CC (formerly Sands Expo & Venetian Congress) is the fifth largest convention center in the U.S. (after Chicago, Orlando, LVCC, and the Georgia World Congress Center) and is a little more than a mile from the LVCC while Mandalay Bay’s CC is the 10th largest in the country (at 2+ million sq.ft.). MGM Resorts invested $350 million from 2014-18 to expand its meeting and convention space on the Strip by a quarter to more than 4 million square feet. They finished a 350,000-sq.ft. expansion of the Mandalay Bay CC in 2017 and opened a 200,000-sq.ft. expansion of the Aria in 2018.

But this year we’ll feature the brand-new venues that had the misfortune to open during a nationwide lockdown: the new Caesars Forum and the Wynn Conference Center were both scheduled to open in March 2020, the Expo at World Market Center Las Vegas in downtown was scheduled to open in the summer of 2020; the newly-renamed Venetian Expo & CC and its new Stella Studio, and MSG’s Sphere, which was to open this year but has been delayed until 2023. 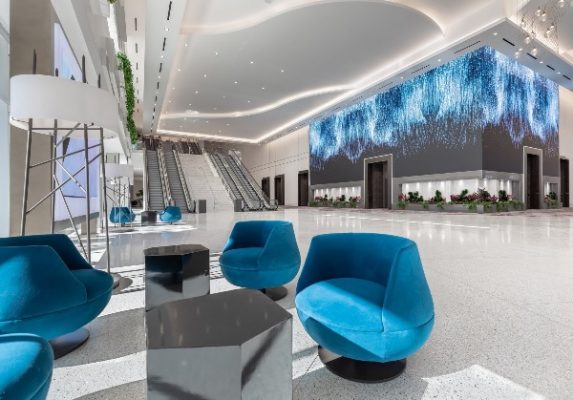 Fun Fact: A covered (and air conditioned) sky bridge lets conventioneers quickly walk to Harrah’s, the Linq Hotel and Monorail. Biophilia, the concept that nature in design provides health benefits to building users, is evident throughout the beautiful FORUM CC. An abundance of natural light, live plants, the four seasons-inspired ballroom carpets and design, and nature-inspired art and photography make the FORUM CC an inviting oasis in Las Vegas. You can feel the feng shui in action!

Date Opened: They opened three weeks ahead of schedule (in February 2020), followed by the lockdown in March 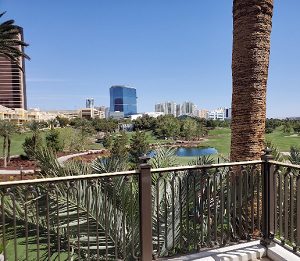 Fun Fact: Floor-to-ceiling windows on both the top and bottom floors of the building offer views of the 17th and 18th holes, including a 100-foot-wide waterfall that is 10 feet tall. The indoor-outdoor area—a 20,000-sq.ft. pavilion and 20,000-sq.ft. lawn—is breathtakingly beautiful. Meeting rooms face the golf course and the patio while the views inside include African and Indonesian art, Venetian glass mirrors and 19th and 20th century furniture. Hand-woven, colorful tapestries hang on the walls and “Smiling King Bear,” a pop-surreal sculpture created by Spanish contemporary artist Okuda San Miguel is on the patio. 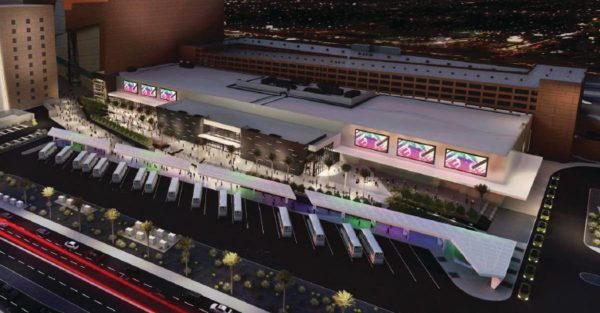 Date Opened: Was scheduled to open in the summer of 2020; official ribbon-cutting was held in April of this year

Fun Facts: The $103.5 million investment includes WorldView, a 10,000 sq.ft. banquet room on the 16th floor with wrap-around windows and an adjacent outdoor terrace (SkyView is a 7,000 square-foot rooftop terrace that can be combined with WorldView). There’s also the Grand Plaza, an open-air 50,000-sq.ft. venue and 190,000+ sq.ft. of surface lots for staging, event parking or an open-air event. The World Forum and Atrium rooms are also available.

Date Opened: 1990 (at the time it was the second largest convention center in the U.S.—it’s now fifth—and was the only privately owned/operated CC in the U.S.)

Fun Fact: The Las Vegas Sands Corporation was one of the few companies in this industry with no layoffs or furloughs during the long lockdown as Adelson said he would personally pay his employees if the corporation didn’t. They debuted a new meeting space this year: The Stella Studio—a multi-functional, 8,000+-sq.ft. venue located in The Palazzo tower with a modern minimalist style, natural light and a neutral palette. 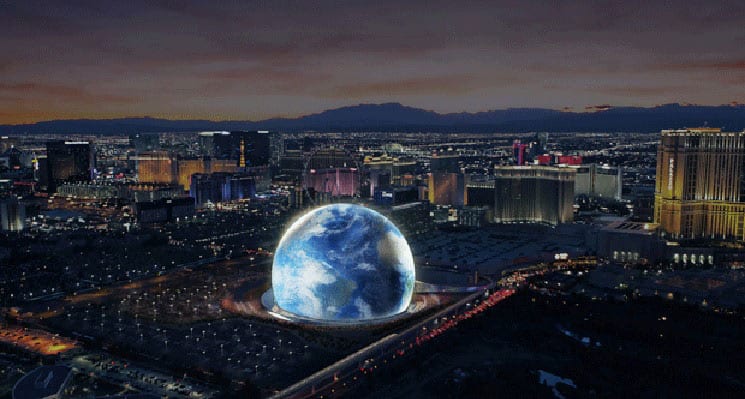 Date Opened: Opening has been pushed back to 2023 with the budget increasing to $1.8 billion

Management: Madison Square Garden Entertainment Corp. was leasing the land for the arena from Las Vegas Sands Corp. (who have since sold all their Las Vegas holdings)

Fun Facts: The venue’s “beamforming” audio system will direct sound to specific locations at a constant volume from point of origin to destination. It will also allow two people sitting in different sections to hear completely different things. An infrasound haptic system will use deep vibrations so that guests can “feel” the experience. The main atrium of the structure will span four floors and feature free-standing escalators and bridges offering clear views of the space below. Upon completion, the dome will weigh more than 13,000 tons with a surface area around 220,000 sq.ft. It’s expected to host expected concert residencies, films, corporate events, award shows, product launches, esports and sporting events such as boxing, mixed martial arts and wrestling.

This story originally appeared in the Sept./Oct. issue of Exhibit City News, p. 10-13. For more pictures and original layout, visit