Despite the severe winter, the performance of the business-to-business exhibition industry, as measured by the CEIR Total Index, posted a year-on-year gain of 4.6 percent (see Figure 1). This increase reflects strong industry growth, marking it as the highest increase since the second quarter of 2007. 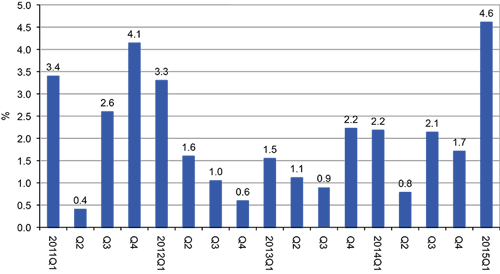 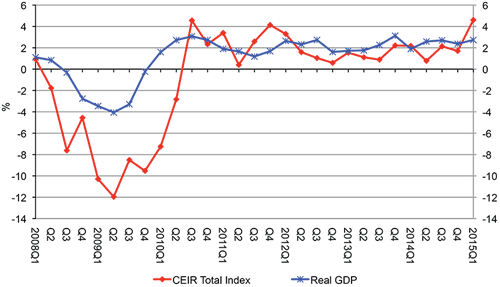 The year-on-year gain spread across all 14 sectors, especially Building, Construction, Home & Repair and Government. For the overall exhibition industry, all four metrics in the first quarter posted year-on-year gain. The strongest metric was in Real Revenues, which rose an impressive 7.3 percent, followed by Net Square Feet – increasing by 4.1 percent. Exhibitors increased 3.3 percent, whereas Professional Attendance could have been influenced the most by the severe weather and yet it rose a relatively strong 3.7 percent (see Figures 3 and 4). 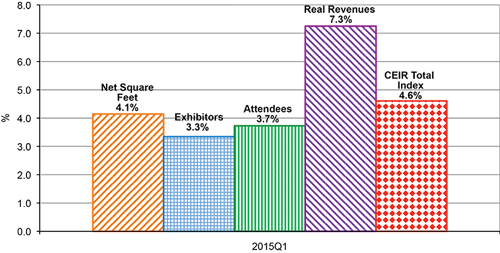 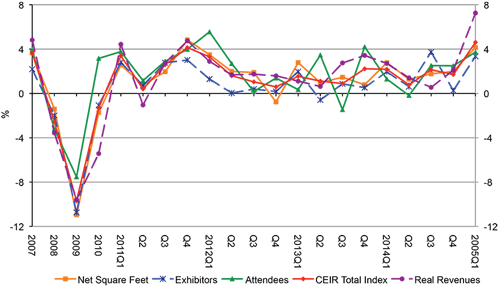 “We are very encouraged to see that the exhibition industry is continuing its upward climb. While industry growth has been moderate, the strong performance of Q1 is certainly offering positive indicators for the near future,” said CEIR President & CEO Brian Casey, CEM. “After two challenging recessions, it’s wonderful to see this kind of performance despite the impact of weather.”

Click here for information on how to purchase the complete CEIR Index Report, which analyzes the 2014 exhibition industry and provides a future outlook for the next three years.