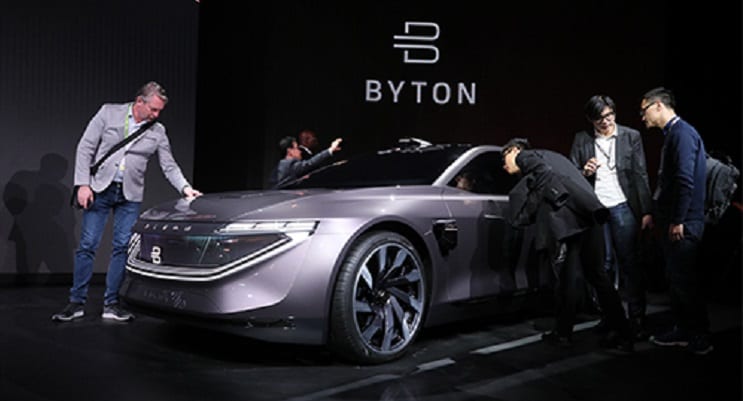 Cars and their cutting-edge technologies were once again a major presence at this year’s CES, with automakers showcasing a wide range of innovations for both the near and far future of transportation. While certain subjects endured from prior years, others emerged anew. These included self-driving, electrified and connected cars, infotainment, telematics and UI or UX (user interface and user experience), as well as a prototype of a walking car.

There were evolutionary advancements. Audi featured a pair of in-car entertainment concepts, lighting ideas for car-to-people communications, and the all-new e-tron — the company’s first fully-electric SUV. The Audi Experience Rideconcept for backseat passengers syncs movies, video games and other interactive content viewed with virtual reality (VR) glasses to the movements of the vehicle in real time. It works by safely feeding data from the car’s suspension control system to the glasses while keeping track of the vehicle’s acceleration, braking and steering. The Audi Immersive In-Car Entertainment concept presents an opposing vision: enhancing movies and TV in a motionless vehicle with seat vibrations, sound and interior light animations, as well as via suspension movements — such as by lifting, lowering, pitching, wavering and shaking the vehicle to match video sequences. The Audi LUX — Light Urban eXperience — exhibit demonstrated how vehicle lights could be activated to communicate with pedestrians and cyclists.

BMW built an outside arena to show off the BMW R 1200 GS, a riderless and self-driving motorcycle, which was developed as a research platform by the automaker’s corporate sibling, BMW Motorrad. Its purpose, BMW says, is to find ways to help drivers maneuver better in the future. Inside an adjacent structure, the automaker used a “mixed reality” exhibit, which combined virtual reality goggles with a seat to simulate a future ride inside a self-driving car connected to the passenger’s smart home and a BMW Intelligent Personal Assistant.

Electric carmaker BYTON, which debuted at CES 2018, returned to unveil its product rollout plans. M-Byte, an SUV, will be on roads by the end of this year and contains several UI and UX novelties, collectively called the “BYTON Life digital ecosystem.” They include the Shared Experience Display (SED), a 48-inch curved display that spans the top of the dashboard and is composed of three separate content areas; a seven-inch Driver Tablet that sits at the center of the steering wheel and stays in position even as the driver steers; and an 8-inch Touch Pad in the center console. Both the Driver Tablet and the Touch Pad can be used to control the SED (which is not touch controllable). Rear-seat screens can share content with the SED.

BYTON Life also incorporates Amazon Alexa and third-party applications, data and smart devices, plus machine learning capabilities that analyze the user’s schedule, location, preferences and data to offer task reminders and other help. The system can recognize voices of different users and sounds from different directions in the cabin. The front seats also can rotate inward 12 degrees, so the driver and front passenger can face each other for better interaction when the car is not moving. “M-Byte represents the transformation of the traditional car into a next-generation smart device for every user,” says BYTON’s chief executive officer and co-founder, Carsten Breitfeld. It also has about 80 to 90 percent of the tech that will be found in BYTON’s second vehicle, the K-Byte sedan, which is expected to be available in 2021, Breitfeld says. A third vehicle is slated to be released in 2023.

Honda followed up on a concept it first demonstrated at CES 2017. The new Honda Dream Drive prototype, demoed in a 2019 Passport SUV, melds infotainment, commerce, services and a rewards program into two “dashboards” for the driver and passengers. Dream Drive: Driver is centered on an in-vehicle payment technology, enabling purchases of fuel, food, parking and movie tickets. 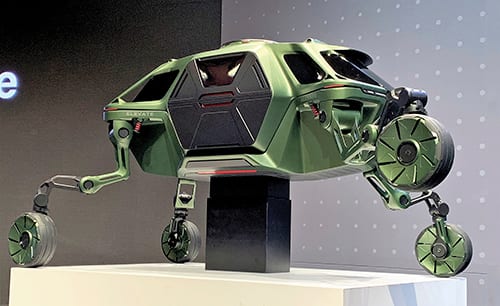 Hyundai paraded its Elevate Concept, which it calls an Ultimate Mobility Vehicle, or UMV, because of its ability to traverse terrain even a NASA rover may find challenging. Elevate boasts a suspension made of robotic legs that have five degrees of freedom and an electric actuator, in addition to wheel hub propulsion. Together they allow the vehicle to stand up and literally walk like either a mammal or a reptile — letting it climb over a five-foot wall or step over a five-foot chasm, for example. The legs also fold up into a stowed drive mode, which cuts power to their joints, converting the Elevate into a highway-capable EV. With interchangeable bodies that are always level, Elevate can be easily converted from a taxicab to a mountainside rescue vehicle.

Hyundai also unveiled the world’s first holographic augmented reality (AR) navigation system, which it developed with WayRay AG, a Swiss startup. It was exhibited as a proof-of-concept in a 2019 Genesis G80. It projects a head-up display image through the windshield rather than onto it, showing navigation information and advanced driver-assistance systems (ADAS) at a distance of 15 meters from the driver’s eyes, including lane departure and forward collision warnings.

Kia imagined a time after self-driving cars are standard fare, building upon its “Beyond Autonomous Driving” exhibit at CES last year. This year’s “Space of Emotive Driving” exhibit included the R.E.A.D. (Real-time Emotion Adaptive Driving) System, which uses artificial intelligence (AI) to sense a driver’s emotional state through facial expressions, heart rate and electrodermal activity, and then tailors the vehicle’s cabin environment accordingly. Kia also displayed its SEED Car concept, a four-wheel hybrid electric cycle (requiring some pedaling by the “driver”) with a range of 62 miles. It’s housed within the automaker’s
BIRD Car, a self-driving shuttle vehicle that releases the SEED Car to complete the journey once it travels within a 100-kilometer range of its destination. Kia figures the pairing to be an example of next-generation smart city mobility.

Mercedes-Benz premiered its new CLA (A-Class) Coupe, which features an update to the MBUX (Mercedes-Benz User Experience) human-machine interface (HMI) that the automaker debuted at CES last year. A new MBUX Interior Assistant recognizes in-air hand gestures in bright sunlight and complete darkness to control vehicle functions displayed on the car’s in-dash display screen, according to the active menu. It activates as soon as a hand approaches the touchscreen in the dashboard or the touchpad on the center console and can distinguish between the driver’s hand and the front passengers to let the vehicle know whose seat needs the massage function turned on, for example. The CLA arrives in U.S. dealerships early this year. More, Mercedes celebrated the U.S. premiere of its new EQC electric crossover SUV at CES, which will go on sale in 2020.

Nissan revealed Invisible-to-Visible or I2V, a future technology of Nissan Intelligent Mobility, the automaker’s umbrella term for devising new ways to power cars. I2V merges information from sensors outside and inside the vehicle with data from the cloud, empowering the vehicle to anticipate what’s ahead and provide the driver or passengers with guidance, given by a human-like avatar that appears to be inside with them.

Real people outside the vehicle also can be conveyed inside the vehicle through a “virtual world” — to what Nissan names the vehicle’s Metaverse — where they appear as three-dimensional AR avatars to provide assistance. But the Metaverse is not a full virtual reality experience, which would be dangerous to use while driving, Nissan assures. Also, to be realized, I2V will require 5G connectivity, Nissan says.

Toyota brought forth Guardian, an ADAS prototype that is “about amplifying rather than replacing human ability … about correcting for human mistakes and human weaknesses and assisting the most vulnerable people at both ends of the age spectrum, where far too many lives are lost,” said Dr. Gill Pratt, CEO of the Toyota Research Institute in Lexington, MA, at Toyota’s CES 2019 press conference. Guardian incorporates a new technology that TRI calls Blended Envelope Control, which has the car “collaborate” with the human driver in a dangerous situation “at the edge of a dynamically changing safety envelope” in “a seamless blend of both human and machine working together as teammates,” Pratt said.

It’s unlike traditional ADAS systems, which take over total control of the vehicle from a driver in such situations. But Guardian can also “act as a redundant check” in a fully self-driving (Level 5 autonomous) car, like a belt and suspenders, Pratt added. So, he also presented Guardian for All, which opens the technology for adoption by other automakers. He also unveiled TRI’s newest technology testing platform, the P4 Research Vehicle — a sensor-clad Lexus LS500H hybrid-electric sedan — which joins the organization’s test fleet this spring.

“It can process sensor inputs faster and react more quickly to the surrounding environment” than earlier TRI test vehicles, Pratt said, and thus will accelerate the development of both Guardian and TRI’s Level 4 and 5 self-driving car technologies, which are called Chauffer. “We think that the important benefit automated driving is not actually about the autonomy of cars,” Pratt declared. “It’s about the autonomy of people. It’s about saving as many lives as we can, as soon as we can, and making the experience of driving more fun as we make it safer.”

Through an extensive and dynamic network, the Consumer Technology Association Foundation brings technology to those most in need — seniors and people with disabilities. For more info, visit www.cta.tech/CTA-Foundation.aspx.