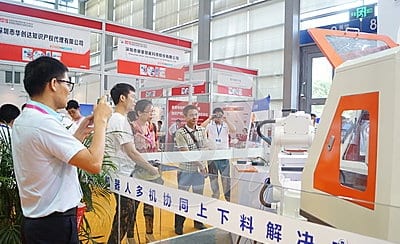 As the trade fair and exhibition industry has edged slowly past the recession years, one global market has moved at unprecedented speed to build venues and add events of gargantuan size: China. At the end of 2016, the number of venues in the red giant had grown to 108 with a collective 5.5 million square meters of capacity. That accounts for more than 70 percent of the total exhibition space available in Asia, which in 2004 had just 100 convention venues across the entire geographic region.

According to a report by IBISWorld, China’s convention and exhibition industry generated approximately $4.7 billion in 2016, a jump of 7.9 percent over 2015. But even as China has grown its exhibition revenue, other markets in Asia have bested China in the growth of space sold, with India, Indonesia, Vietnam, and the Philippines performing better.

The report suggests that the growing Chinese economy has sparked a demand for convention and exhibition services. But analysts and Chinese exhibition officials agree that there are a number of factors slowing China’s success as a global exhibition destination when compared to its Asian neighbors.

Chief among them has been the governmental red tape associated with participating in exhibitions there. Event managers have complained of difficulty getting products for shows through Chinese customs, and stories of governmental officials autocratically changing dates or venues for events due to an unexpected government need for the space abound. Companies within certain industries also shy away from business dealings in China because of the widespread and sometimes flagrant counterfeiting that has become associated with Chinese products.

To address the country’s shortcomings in the exhibitions industry, government officials have set out a plan for improvement that, if successful, should assuage concerns and problems for show organizers and participants alike. A coalition of governmental departments is implementing a roadmap that has a deadline of 2020 for execution, at the end of which officials say China will have a sound development environment and a high level of internationalization.

A cornerstone of the plan is for government authorities to step away from the organization side of exhibition industry, allowing more events to be organized and sponsored by private companies. In addition, the government promises to aid large Chinese exhibition companies in establishing international partnerships or mergers to allow the country more participation in multi-national events. The government will also foster better cooperation with international exhibition organizers to attract their business into China’s vast exhibition space, and it is offering tax breaks for organizers to stimulate interest. Government officials have also vowed to improve intellectual property rights protection, though the details of how they will be strengthened are still being developed.

Chinese authorities recognize that merely building venues isn’t enough to make China a competitive player in an industry that has been continually evolving over recent decades. Though historically known for its build-and-burn environment and lax environmental protection controls, China is also making a move towards more environmentally aware practices like reusable exhibit components – a shift that follows a worldwide trend towards Green practices in exhibiting. In China, new regulations for the industry are making strides to quickly bring its industry into alignment with practices around the rest of the world.

Analysts speculate that China’s interest in the exhibition market was fueled by its participation in the 2008 Beijing Olympics and the 2010 World Expo, events that demonstrated the powerful economic impact that visitors can have. In the wake of those events, its exhibition market revenue has grown at an average rate of 8.3 percent annually for the past five years, with authorities rushing to construct new venues in cities like Shanghai, Beijing, and Guangzhou. The country reportedly hosted nearly 6,000 exhibitions in 2016, accounting for 56 percent of all of the space sold in Asia.

But without reforms to the governmental processes, customs difficulties, rampant counterfeiting, environmental indifference, and overall lack of established exhibition standards and policies nationwide, Chinese organizers feared the country’s exhibition industry may have reached a plateau. However, with a cooperative effort by government agencies, officials say China is poised to be a major competitor in the global exhibition industry.