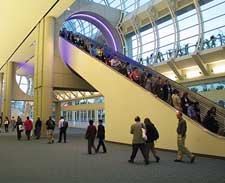 The SDCC will host Comic-Con through 2015.
Photo by Owen McGoldrick, courtesy of the SDCC

The San Diego Convention Center Corporation (SDCCC) announced that Comic-Con International, the mega convention that has called San Diego home for more than 40 years, would remain at SDCC through 2015, turning down bids from Anaheim and Los Angeles, Calif. Over the last several months, Mayor Jerry Sanders, SDCC corporation officials, local hoteliers, and business and community leaders partnered to launch an intensive effort to keep the convention in San Diego due to its large economic and cultural impact.


“San Diego has been home to Comic-Con for over 40 years and it’s an honor to continue hosting this important event, which is now so much a part of the fabric of our community,” said Sanders. “Our bid was successful because of the combined efforts of our convention center team, the hotels and our entire hospitality community.”

According to an in-depth study commissioned by the SDCCC using 2008 data, more than half of Comic-Con attendees stay in hotels, and an estimated 126,000 hotel room nights are used by people staying an average of 4.1 nights at a rate of $199.

The study found that spending on hotel rooms alone was $25 million, which translates into more than $2.6 million in hotel room taxes for the city’s general fund to help pay for police and fire protection, street maintenance and other city services. That’s in addition to the $147,000 produced in sales tax revenue by attendees.

“San Diego beat out some stiff competition, and the importance of expanding the convention center has been clearly demonstrated,” said Bob Nelson, SDCCC board chair. “Comic-Con’s challenges fitting into the current facility underscore the importance of the mayor’s efforts to expand the convention center. The economic impact of conventions like Comic-Con in terms of local jobs, tax revenues and economic activity, not to mention the competitive nature of this industry, are critical to San Diego’s future.”

Organizers for Comic-Con began considering other cities as their present contract with the SDCC comes to an end in 2012. The increasingly popular event’s square footage needs have continued to grow through the years, making it difficult to adequately accommodate their present and future space needs in the present convention facility. City and hospitality leaders committed their full support to help resolve many of the challenges, prompting local hoteliers to offer expanded hotel room blocks, discounted rooms, and other incentives to keep the lucrative event in San Diego.

“Comic-Con and the SDCC have grown together and thrived as partners delivering an experience that cannot be duplicated in other cities,” said Carol Wallace, president and CEO of the SDCCC. “We are grateful to the hospitality community who came together and committed themselves to this effort, and especially for the leadership of Mayor Sanders who helped ensure that Comic-Con will continue to call San Diego and the SDCC home.”

The convention center continues to make forward progress in its efforts to expand and has recently secured six acres of bay front land adjacent to the current facility clearing the way for a possible expansion extending toward San Diego Bay.

In addition, a Request for Proposals was issued in July to identify the architectural design team who will ultimately design the expansion. Over the next 18 to 24 months, the convention center will begin the environmental review and permitting process, engage the community and stakeholders and finalize the expansion design. At the same time, the city of San Diego, under Mayor Sanders’ leadership, will explore financing options for the estimated $750 million project.

The SDCC Corporation manages, markets and operates the SDCC. The facility has proved to be a vital economic engine generating $18 billion in regional economic benefits and $360 million in tax dollars for the city of San Diego.