North American airline capacity reductions continue to accelerate in terms of depth, breath, and time. Examples of recent announcements across airlines include (with date of announcement): 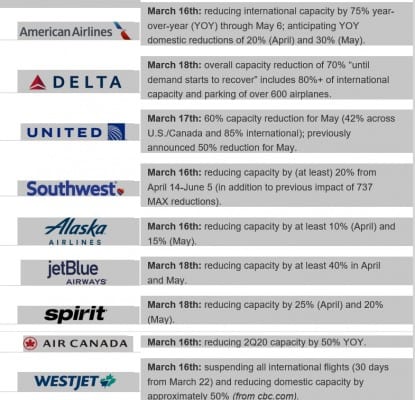 Note that we expect this capacity guidance to continue to evolve throughout the days and weeks ahead and will keep you updated as appropriate.

IATA’s estimate of the impact on global airlines increased from $29 billion (February 20) to $63-$113 billion in a March 5 update – with $21 billion of this impact projected from the U.S./Canada markets. Expect the downside risk scenario figure in the U.S./Canada marketplace to significantly exceed what was forecast two weeks ago in the upcoming updated formal IATA guidance.

It is important to note that, prior to the onset of this crisis, the U.S. airline industry was in much better financial health than during recent major industry shocks, including the post-9/11 period. However, the virtual halt of bookings across both the domestic and (particularly) international markets have transformed this into a generational risk event. Airlines for America (A4A), the primary trade association representing North American carriers, proposed this week a $50+ billion dollar relief package from the U.S. government. Recent statements from the administration indicate a willingness to support some level of the package.