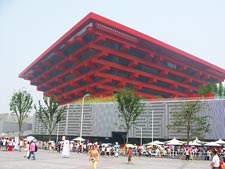 People would wait up to 6 hours to get into the China pavilion.

This year, the International Federation of Exhibition and Event Services (IFES) conducted their annual group meeting with its members in Shanghai, China.


The IFES business portion of the three-day meeting was held at the Sofitel Hotel conference center which was two miles from the expo site. The meeting was attended by 135 representatives from 27 countries and 31 of those guests were from China. Honored dignitaries from Shanghai presented information on the exposition industry in China and its continued growth in all of Asia.

There are roughly 165 exposition centers in 15 Asian countries, 87 of which are in China.

Preparation for customer support with exhibit needs in China will require some regional knowledge and good partnerships for American companies.

IFES arranged a full day of topics and guest speakers to address the topic of doing business in China.

American member company, EWI Worldwide, based in Livonia, Mich., conducted a presentation on the experience of opening a China-based branch. Ben Einer, vice president of EWI International, gave the presentation.

“There are usually two points of view to manage expectations, but it depends on which side is asking,” said Einer. “Gaining awareness of our cultural gaps goes a long way to establish a positive relationship when securing a foothold in China.” 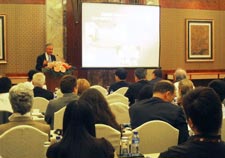 Larry Kulchawik, 3D Exhibits and former president of IFES, speaks during the morning session of the annual meeting.

The morning session of the annual meeting was launched by Larry Kulchawik, director of 3D Exhibits and former president of IFES, and was titled Managing the Brand from one Country to the Next. The presentation focused on the adjustments required when exhibiting the same product/message worldwide. Topics covered included differences in show regulations, labor, design, and cultural expectations.

Kulchawik was joined by Stephen Benedetti from Heilmaier, Munich, and Benedict Soh, founder of Kingsmen, one of Asia’s largest exposition suppliers with offices in 16 eastern countries. The three presenters have partnered together in the past to manage several companies’ exhibit programs.

The concept of constructing a team exclusively for an individual customer ensures a cooperative spirit will prevail and knowledge of regional practices are shared in an effort to eliminate surprises.

For example, Kennametal Corporation, managed by Heilmaier is headquartered in the USA. The first show for their year-long strategy is EMO in Hannover. This event premiers the Kennametal brand’s look and marketing strategy for the entire year. Each subsequent show must then be modified to meet the requirements of the region. These modifications are achieved with advice from managing partner Heilmaier, the local supplier resource and the client. Heilmaier manages the Kennametal global program, but they select other partners to represent them in various world regions.

“The advice and council received from our world partners really helps to eliminate surprises at show site,” said Stephen Benedetti, director of international brand management, Heilmaier Messe Design. “It serves to help the Kennametal exhibitors better adapt to the culture and selling environment.”

Later in the presentation the audience was invited to share their tradeshow experiences in other countries. Testimonials indicated subtle differences in operating procedures, like the fact that the simple act of exchanging business cards could ruin a first impression if not handled properly.

Peter Theodorides, president of Vision LTD in Athens, Greece, discussed another example while assisting an American client at a tradeshow in Greece. The client asked that the workers stop smoking. However, the workers were on a break and in a designated smoking area of the building.

“My dear customer,” Theodorides explained, “although smoking bothers me as well, I cannot ask my workers to refrain when the rules say they are permitted to do so in designated areas,”

The client was annoyed, but the workers completed the job without making any further eye contact.

Benedict Meissner, EWI Germany, served as a project manager for the installation of the German pavilion in Shanghai. In addition, he lived and worked in Shanghai for four months prior to the opening of the expo.

“To achieve my goals in China during set up, it was important to realize that I was a guest in their country,” said Meissner. “The Chinese culture is strong and unique and I cannot change their way of thinking so I needed to alter my own behavior to get things done.” 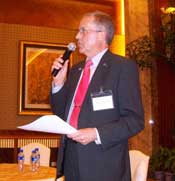 Bruno Meissner, president of IFES, addresses the membership at the annual group meeting.

An insightful testimonial by Leslie Zech, CEO, IEEC/Vienna, Austria, and former president of IFES, was shared about having managed a show in the United States for an Austrian company that wanted a Steinway piano in their booth. When inquiring about the rental cost of the piano, drayage and shipping was not included.

“The cost to bring the piano to the stand cost three times what it cost to rent. I did not want to own the piano!” said Leslie Zech.

Christopher Dorn, president of Idea International, based in Tokyo, believes IFES is beginning to over come these obstacles and move forward.

“The IFES group of company owners from Europe are very knowledgeable and professional partners who are experiencing the same exciting growth and challenges in China as we are in Japan and in the United States” said Dorn.

Members of IFES also shared their observations about the interaction between themselves and the Chinese.

“The Chinese people are very curious,” said Koen Bogaert, CEO Publiganda/Belgium, former president of IFES. “They are eager to learn, and they will. We will also learn from them as time goes on. The western world cannot be too arrogant, presumptuous, nor self satisfied with the status quo. Let’s stay alert as the Chinese make their way in the world economy.”

“The City of Shanghai is a business boomtown like New York was in the 60’s,” said Rob Beens, CEO of Boemer Rental Service Group in Amsterdam. “The ambitions of Chinese companies need to be anticipated in both Europe and the United States. Chinese companies are extremely eager to move up the ladder. Social and economic issues are getting more important and a better understanding will help the world in streamlining Chinese developments.”

Beens said companies need to understand the value of a yuan, the social rights of event staff and that wages need to be increased.

“Based on these developments and impressions, China is not a threat but a force,” said Beens. “We can learn from them regarding their ambitions and energy. Our competitive edge can only be based on quality.”

The plan to have their annual meeting in Shanghai was a positive choice according to IFES members. 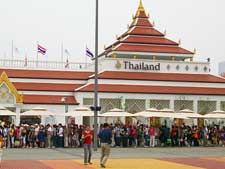 The Thailand Pavillion at World Expo 2010.

“Visiting World Expo 2010 in Shanghai gave me a great opportunity to hear some interesting commentaries on the socio-cultural intricacies and attitudes about the times we live in,” said Voicu Sferdianu, Expo Design System of Romania. “With all the business climate changes and the unprecedented population increase in the inner cities, this year’s central theme at the Shanghai Expo ‘Better City, Better Life’ could not have been better chosen. I was amazed to witness the green initiatives at the expo. Alternative transport modes that do not use fossil fuel, recycling strategies to reduce waste, extensive passive design techniques, and renewable technologies were all leading to the idea of a sustainable future.”

“What an experience, the world’s biggest expo in the world’s most vibrant city,” said Bruno Meissner, IFES president/ Meissner Expo, Hamburg, Germany. “Every single pavilion we visited gave us a new view on the world and is helping us to better understand the motto ‘Better City, Better Life’. Especially the Chinese Pavilion, which gave me an encouraging view on the visions of modern China.

“This trip, including the IFES Convention, uncovered so many insights on inter-cultural competencies,” added Meissner.”It was one of the best investments I’ve made this year. I feel sorry for all those who were not able to join.”

Sarah Chew, director of sales and marketing for Kingsmen, Singapore, was also amazed by the World Expo.

“What an awesome and enriching journey,” said Chew. “The enormous showcase carried powerful messages with different appeals. The cleverly interwoven exhibits utilized the latest in design trends and technology. You really need to have time and plenty of patience to be able to experience it all. A press pass also helps.”

Based on his experiences in Shanghai, Kulchawik believes that the world exposition market is beginning to join together as one entity. During the trip, five Chinese exhibit suppliers joined the growing membership of IFES.

“The IFES tag line, Sharing Knowledge, is best realized by attending these events,” said Kulchawik. “The open dialogue between international friends that takes place at these events is where our similarities and differences are truly exposed. The value of tradeshows, eyeball-to-eyeball communication and the international group interaction among suppliers is a very powerful tool.”