Known as one of the biggest trade-only gaming exhibitions in the United States, the Electronic Entertainment Expo (E3) once experienced tough times with exhibitors and attendees voicing frustration over the change in the show’s format that, at one time, allowed public attendance at the exclusive tradeshow.

This year’s expo, held at Los Angeles Convention Center (LACC), has since reverted to only admitting gaming insiders and retailers, and, while visually captivating, the show has been downscaled in size and downplayed in glamour. 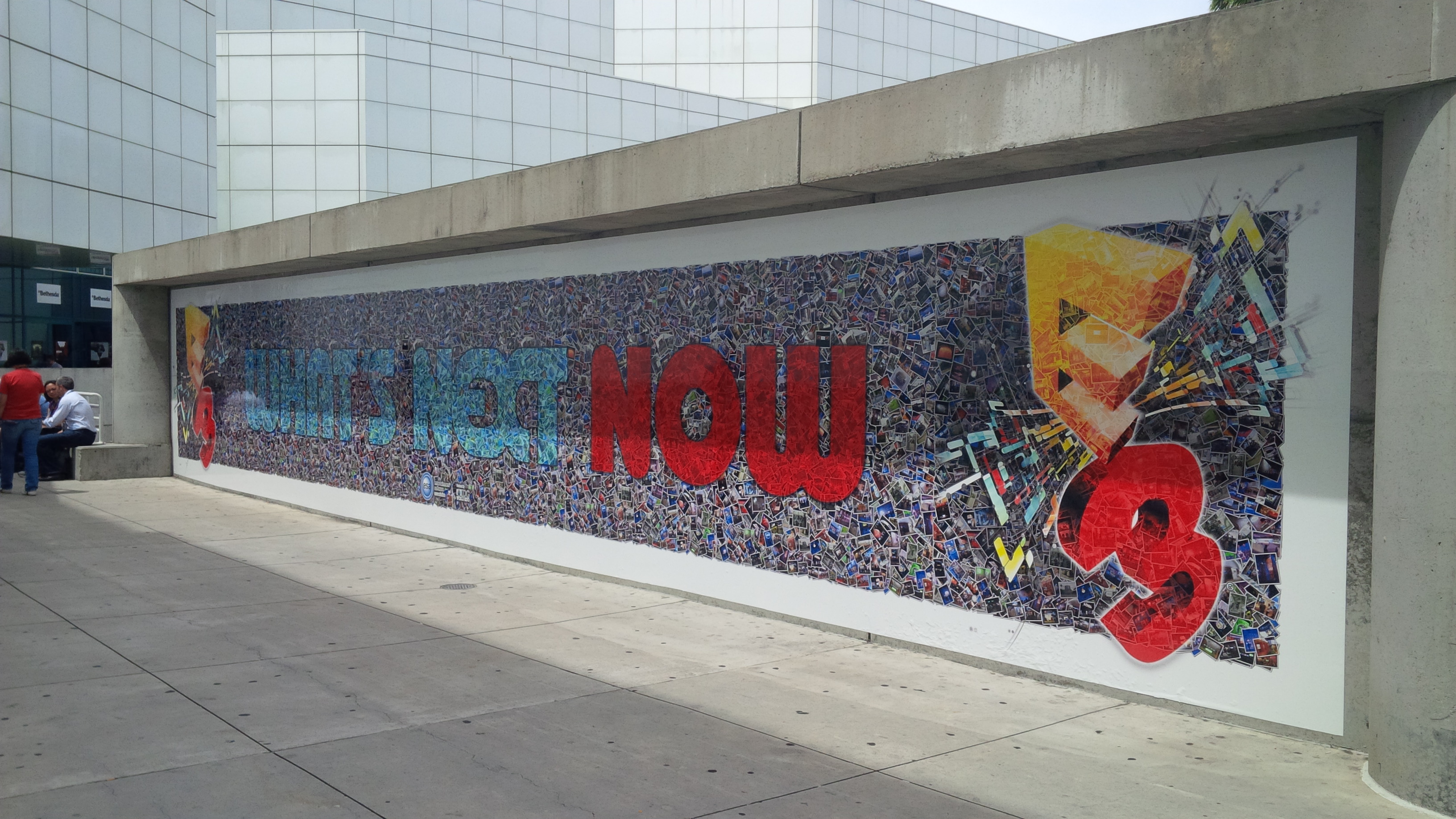 Generally, this year’s show had a quieter and calmer setup than last year, according to David Henderson, foreman, Decorators Union Local 831. Henderson attributes the relatively relaxed atmosphere to both downsizing in the number of exhibitors as well as less intricate booth designs in addition to an extensive 11-day move-in this year.

Exhibitors used their own staff for setup after I&D brought in booth materials. Electricians, teamsters and the decorators union worked in tandem with exhibitor staff. Anaheim, Calif.-based company Laser Exhibitor Service completed most of their required work within a shorter time frame than anticipated.

Expecting the highly anticipated release of new gaming consoles at the 2014 show, the E3 2013 was primarily at a lull in game production for existing systems, according to Capcom exhibit designer Kathy Lee-Jung. Exhibitors understood that exhibiting during a transitional year would mean less enthused buzz and excitement than in a year of new gaming machines and accompanying games. However, spirits remained high among attendees who lined up outside the halls to await entry into the show floor.

Meticulously detailed show regulations involving everything from an 85 decibel restriction individually tested in each booth to strict security measures on taking photographs of one’s own exhibit demonstrated the high level of secrecy of the show. Gaming giant Nintendo’s booth space remained shrouded in secrecy until the start of the show. Rumored to have cost more than the exhibit itself, opaque white curtains nearly reached to the top of the 40-foot ceiling and enclosed the entire structure. Only a small, sheer triangular panel showed glimpses of famed video game character Mario’s image suspended from the ceiling until opening day. 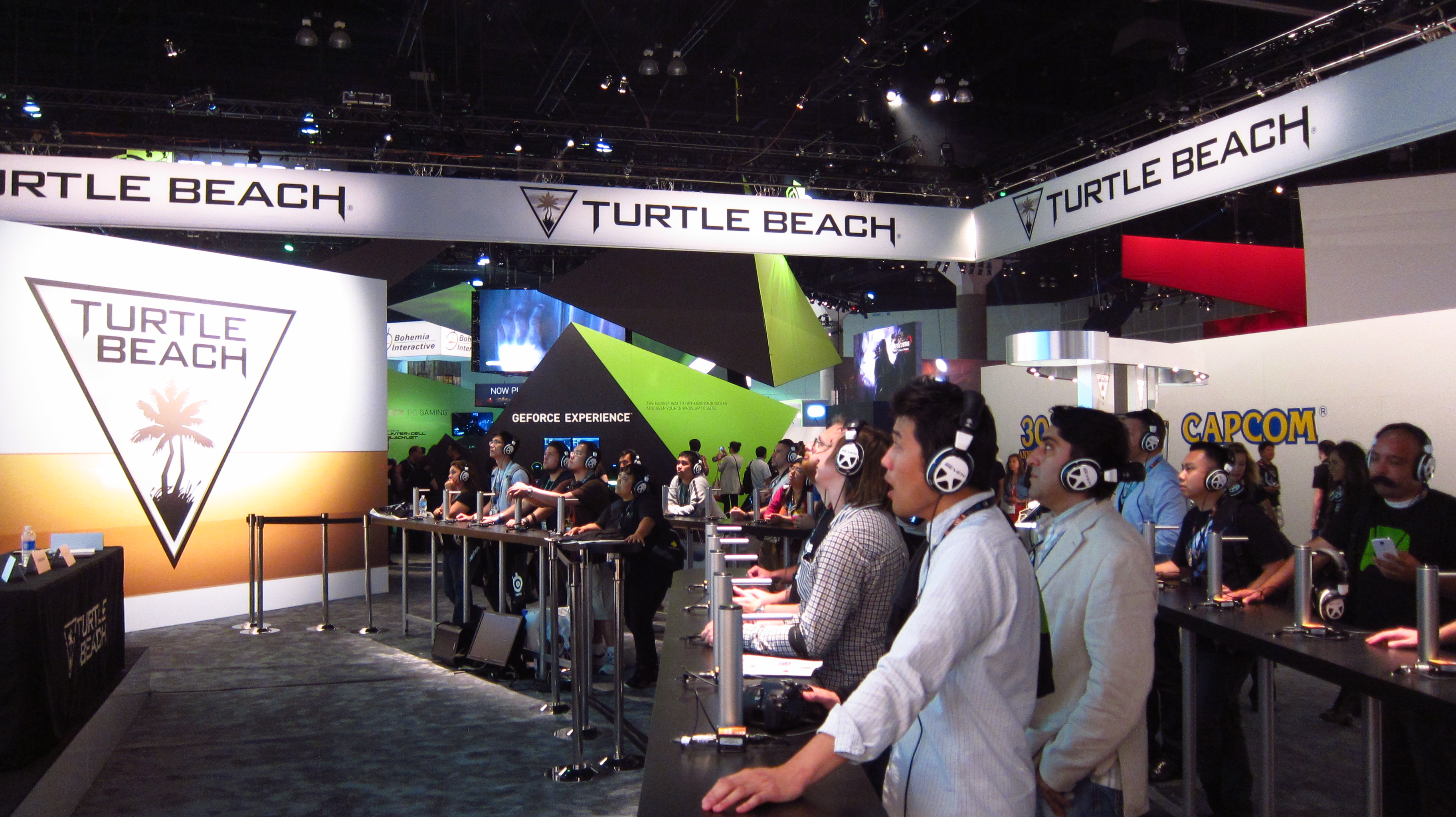 A gleaming 2014 Corvette greeted gamers lining up to test Sony PlayStation’s Gran Turismo 6 game, offered in a dozen full-size video arcade racecars. Gamers also stood atop four rows of glass-covered LED screens on a raised stage for the ultimate gaming experience. Highly secured meeting spaces on the second floor of two stacked containers offered a bird’s eye view of the gamers delighting in the new games on the open floor space below.

The double-deck booth was glowing green from the LED lights installed between tall panels of tension fabric surrounding the entire perimeter of the booth with several archway entrances. A total of six Xbox logos appeared to float along the walls. Each letter, made of individual light boxes, was pinned to the wall of the tension fabric, casting no shadow.

A total of eight 30 x 30-foot experiences were built around each product for individual representations of different games. Among other large-scale builds within the booth, Wylie constructed a raised, lighted stage to display a Forza sports car for the Forza Motorsports 5 game. PC stands used in prior shows were repurposed by adding a grate on either side to ventilate the computers stored underneath, and game graphics were added to several wall panels to show game partnerships, such as one with the National Football League.

Screen projectors and LED TV’s could be seen throughout the show floor.

Over 20 private meeting rooms were housed within the double-deck display for buyers to quietly conduct business away from the hustle and bustle of the product demonstration floor. Using soundproofing materials to reduce noise from outside chatter, gaming systems and neighboring booths, the rooms were located on the ground floor of a double-deck system, which also contained an entertainment hub on the upper level overlooking the entire booth. 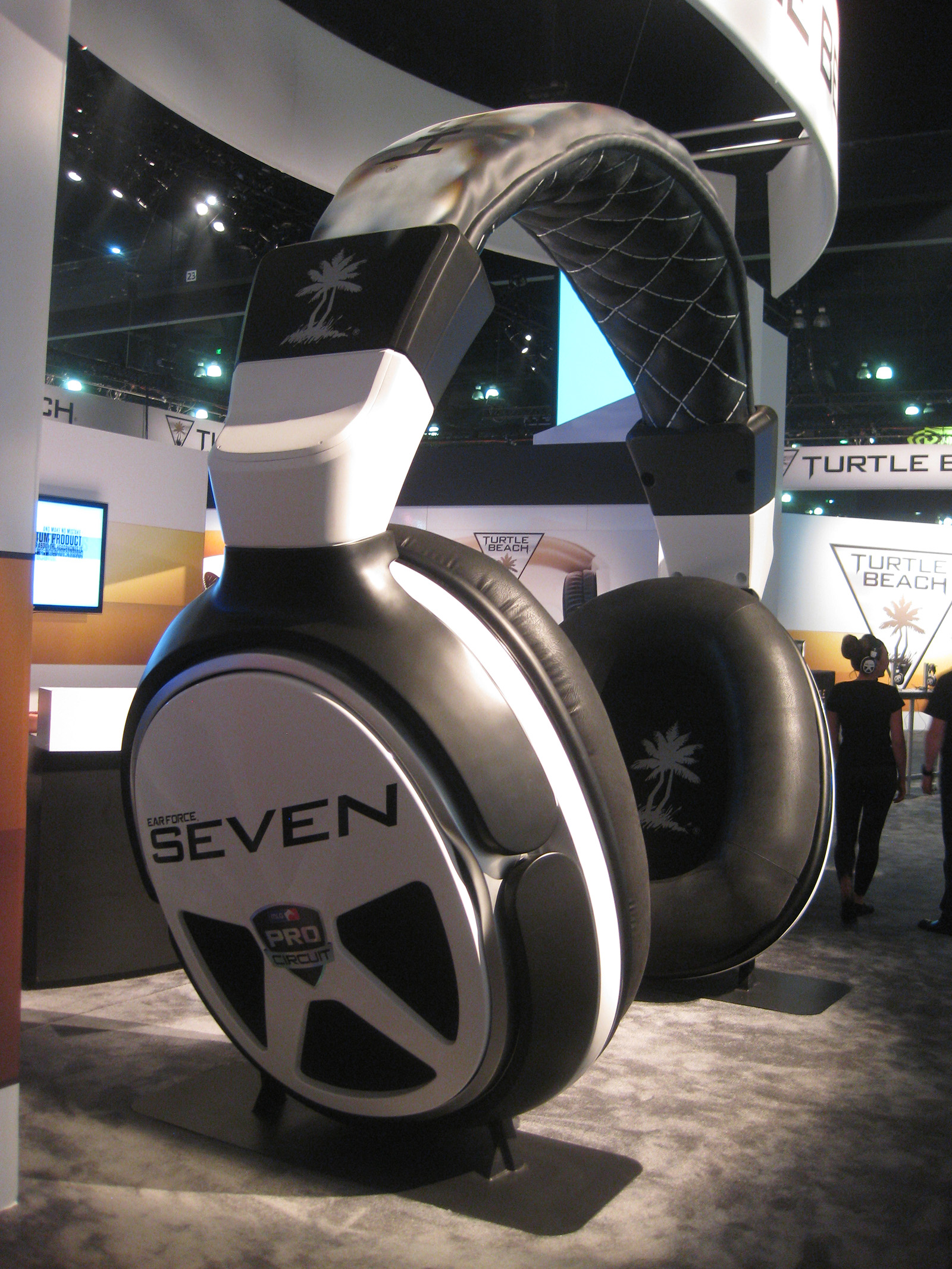 Gamers enjoy both the sights and sounds of the latest gaming products.

Producing the No. 1 gaming headsets, Turtle Beach focused its audio product at a visually dominated gaming show based on a different sensory experience. An oversized working replica of its tournament-grade headsets standing 12 feet tall was strategically placed at a T aisle to draw in attendees walking between booths. Oogie Lee, exhibit designer, Ignited, created his own spotlighting for a theatrical visual impact over its increased floor space of 100 x 100-feet from 6,000 total square feet last year.

NVIDIA’s comeback to E3 2013 had to be more than a typical booth design and build. ASTOUND Group’s Toronto-based creative team combined architectural form and thinking with movement by suspending abstract geometric shapes from the ceiling. Based on NVIDIA’s newly conceptualized San Jose, Calif., headquarters, remnants of triangular prisms hanging overhead throughout the booth captured the team’s concept of an exploding pyramid that appears to have been freeze-framed as it expanded outward from a central trigger point. The design served a functional purpose with each fractal piece acting as a surface and platform for multi-surface lighting while also creating a lightly enclosed environment upon entering the booth space, making visitors feel as though they were entering the full experience. 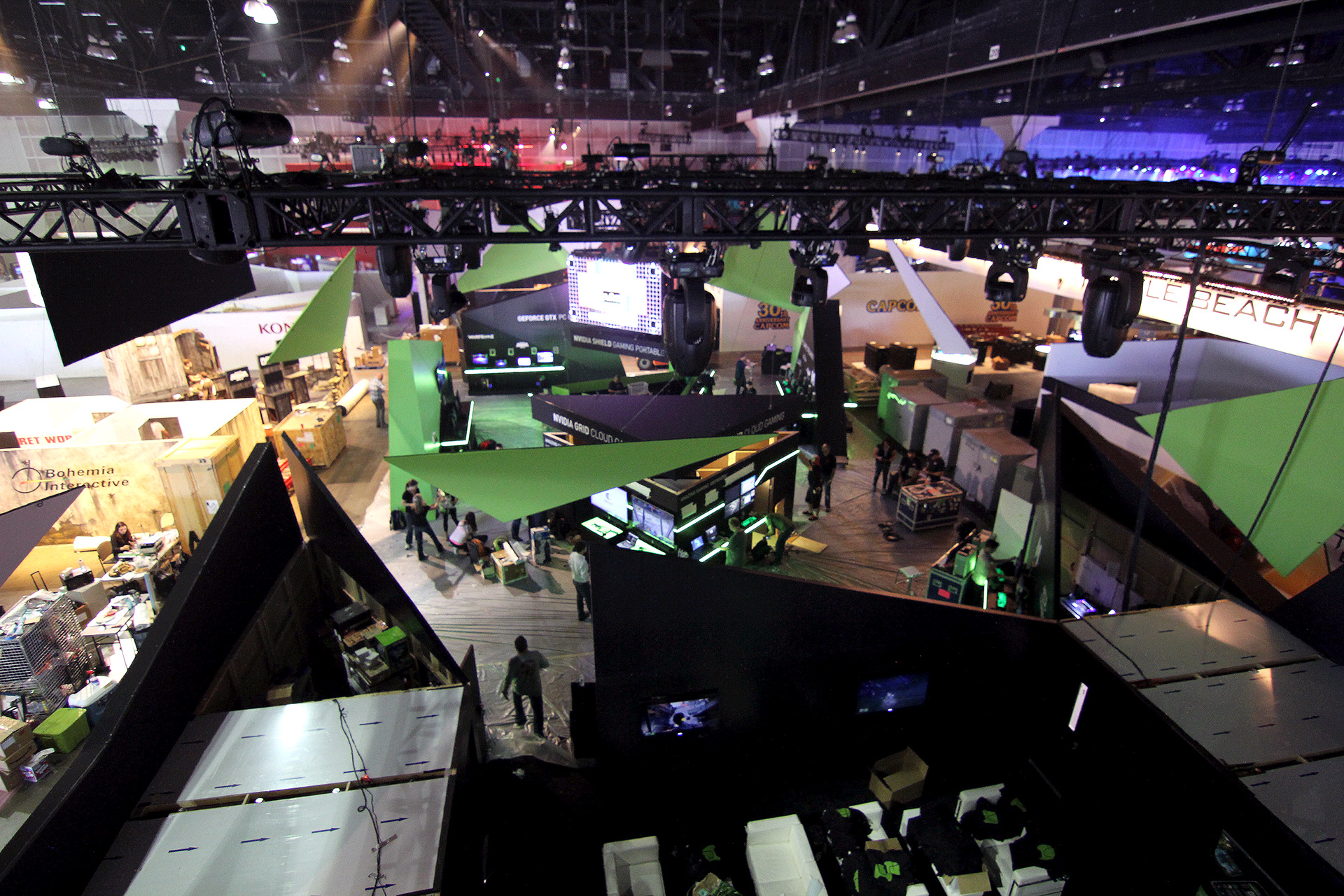 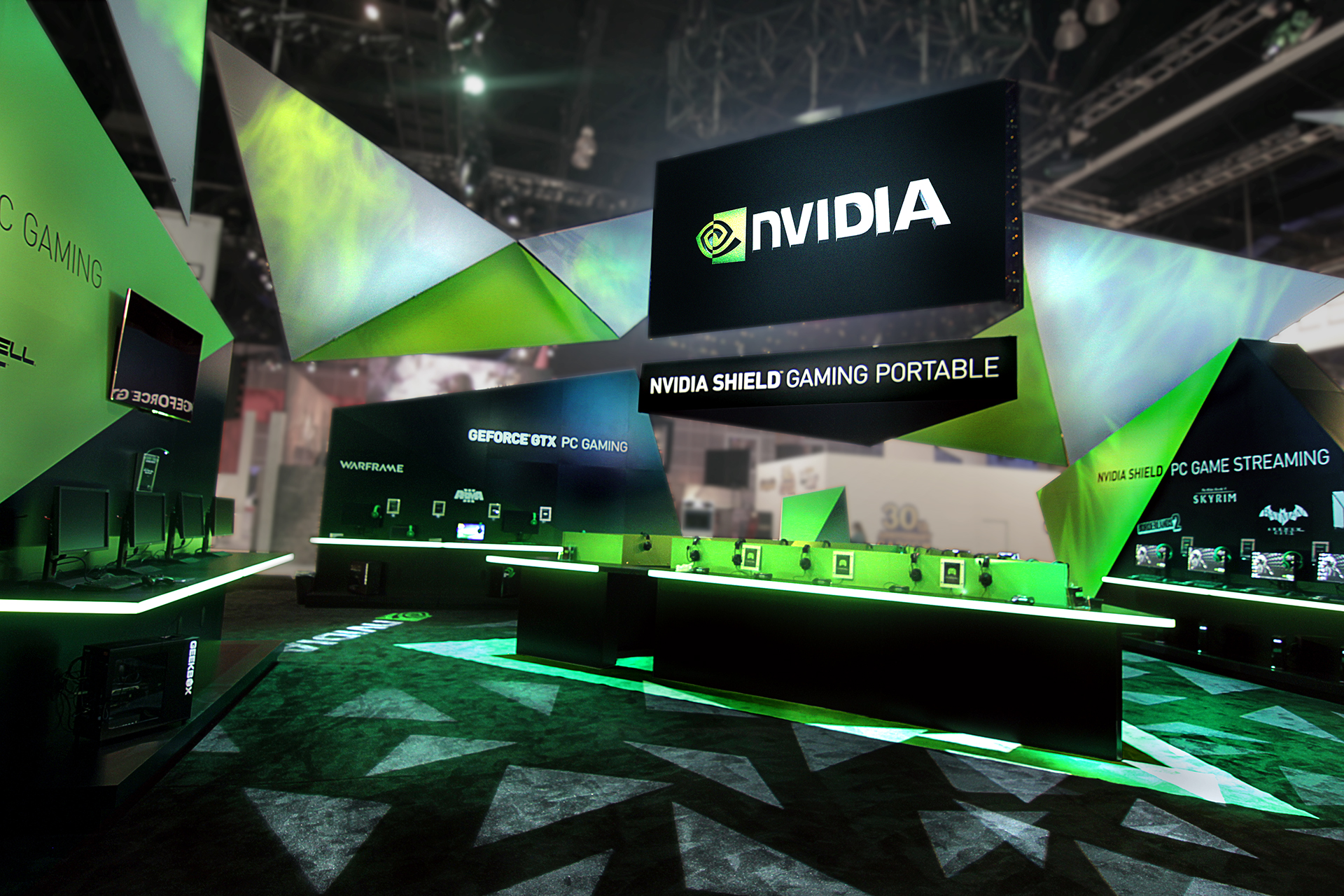 AFTER: E3 design concepts go up and beyond.

A large scale 360-degree AV installation in triangular form served as the booth’s centerpiece showcasing NVIDIA products and partners. Projectors mounted on the light trusses above the exhibit projected glowing green LED lights along the edge of the standing gaming stations, which accented the all-black displays.

Exhibiting for the sixth year, Capcom focused on the orientation of its booth to stand out from the rest. Taking advantage of its premium location at the front entrance of the show, the Japanese-based gaming manufacturer designed a diagonal exhibit that faced away from surrounding competitors. Flesh-eating zombies in a gloomy post-apocalyptic scene greeted attendees from behind a caged display while individually seated stations equipped with headphones featured the latest in handheld gaming technology.

Equal attention was given to retailers and gaming fans in the front display as well as the private meeting area for buyers behind the security checkpoint by designer Kathy Lee-Jung. Understanding that both audiences are equally valued customers, equal experiences were created both for the public and private divisions of the booth. In her experience, Lee-Jung stressed that establishing long-lasting, trustworthy vendor relations were integral to a well-run show.

Orange inflatable furniture brightened the central hub of the IndieCade exhibit. Festival designer Samuel Roberts chose inflatable couches and ottomans for the ease of installation, ability to reuse at other shows and festivals and compact storage when deflated.

As classic and obscure games began to increase over the years, IndieCade’s booth size subsequently increased to accommodate attendees’ growing interest, according to Roberts. Over 40 games were showcased by the International Festival of Independent Games in separate spokes extending from the central hub as compared to the 10 games on display during IndieCade’s first E3 Expo exhibit.

The convention center itself is expected to enlarge over the next few years. Expanding its square footage by connecting its South and West halls, LACC officials aim to create continuous floor space that would span wide enough to reach the adjacent I-5 freeway. Both halls are to remain open until construction is complete to allow recurring tradeshows to continue exhibiting. West Hall is set to be demolished following the extension of the South Hall. Adding a ballroom will make the LACC one of the largest business-meeting spaces in a metropolitan city. Convention center management will change hands from the city of Los Angeles to a private company, which is to be determined.

While highly successful, exhibitors and attendees expect the 2014 show to be larger and grander in scale, exhibit design, technology and overall attendance.