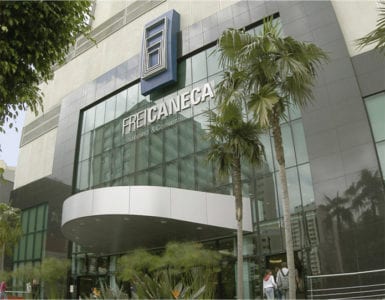 Convention Centers associated with the SPCVB shine through with modernizations performed in the recent years. Pictured at right, Centro de Convenções Frei Caneca.

São Paulo is the biggest metropolis in Brazil, with 12 million inhabitants, according to the last survey conducted by the IBGE (Brazilian Institute of Geography and Statistics). In order to adjust to this reality and be able to host the approximately 90 thousand events held every year, event spaces have frequently invested in expansions, modernizations and improvements, which offers more quality and possibility of increasing the number of events captured for the capital city.

The milestones are not few. Drawing a timeline, the Transamérica Expo Center delivered in 2012 its last expansion, resulting in a total of 40,000 m2 of lease area. In 2013, it was the time for the convention center Centro de Convenções Frei Caneca to present its expansion, which now has an exhibition area of 10,500 m2.

In 2014, the convention center Centro de Convenções Rebouças completed its expansion project, in which they invested about BRL25 million and integrated more 10,000 m2 into their total space. In 2015, the Expo Center Norte announced its new food structure, which now has four permanent restaurants and a BRL25 million investment. In the same year, the former Centro de Exposições Imigrante had its name changed to São Paulo Expo. Officially opened in 2016, the space received a BRL140 million investment for its modernization and expansion, causing the region to turn into a new center that will soon have hotels and trading centers to meet the service demand. The same is to happen in the region where the new Centro de Eventos PRO MAGNO is located. The event center was opened in 2014 to host medium and large events, such as fairs and conventions.

Toni Sando, Chairman of the SPCVB, explains that the investments reflect the sector optimism and consolidate São Paulo as a global event destination. “In Brazil, São Paulo is the ICCA’s number one city among the destinations hosting the most international events. Despite facing a context of political and economic challenges, the tourism, event and travel industry is always seen as an overcoming way”, he says. According to the entity’s event calendar, the leading event types are Medicine, Science, Technology and Communication, and Technical & Scientific.

Data from the Observatório do Turismo da Cidade de São Paulo – a tourism study and research organization for the city of São Paulo – shows that over 70% of São Paulo’s visitors are motivated by tourism and events. According to Platum – a publication from the Observatório – São Paulo is expected to receive 16.5 million visitors by 2020, and 3.1 million will be international visitors. It is a 10.96% growth in comparison to the forecast for this year.

The Centro de Convenções Frei Caneca is one of the main spaces in São Paulo in this sector. With 15 years of operation, it hosted over 1,725 events with about 2.7 million visitors, reaching a 74.8% average occupancy rate. Its Director, Winston Chagas, explains that the expectations for the next two years are optimistic. “We are supposed to reach a growth of about 9% in 2016 and 11% in 2017 on year-over-year basis”, he says. The expansion of the space is deemed a milestone for the undertaking, which in addition to the 10,500 m2 exhibition area, has a seat capacity for modular rooms of up to 3,800 seats and also offers the theater Teatro Shopping Frei Caneca, with a capacity of 600 seats.

“The market recognition due to the organization of several national and international events in our space is the most significant return and encouraged us to plan and implement our expansion”, states Winston Chagas, who was in charge of the planning since its initial work as well.

Out of the main major fairs held in Brazil, 415 fairs take place in the state of São Paulo and 392 in the city of São Paulo. The economic impact of the Business Fairs in the city is of BRL16.3 billion, according to the survey conducted by FIPE Ubrafe (Institute of Economic Researches and Brazilian Association of Fair Promoters).