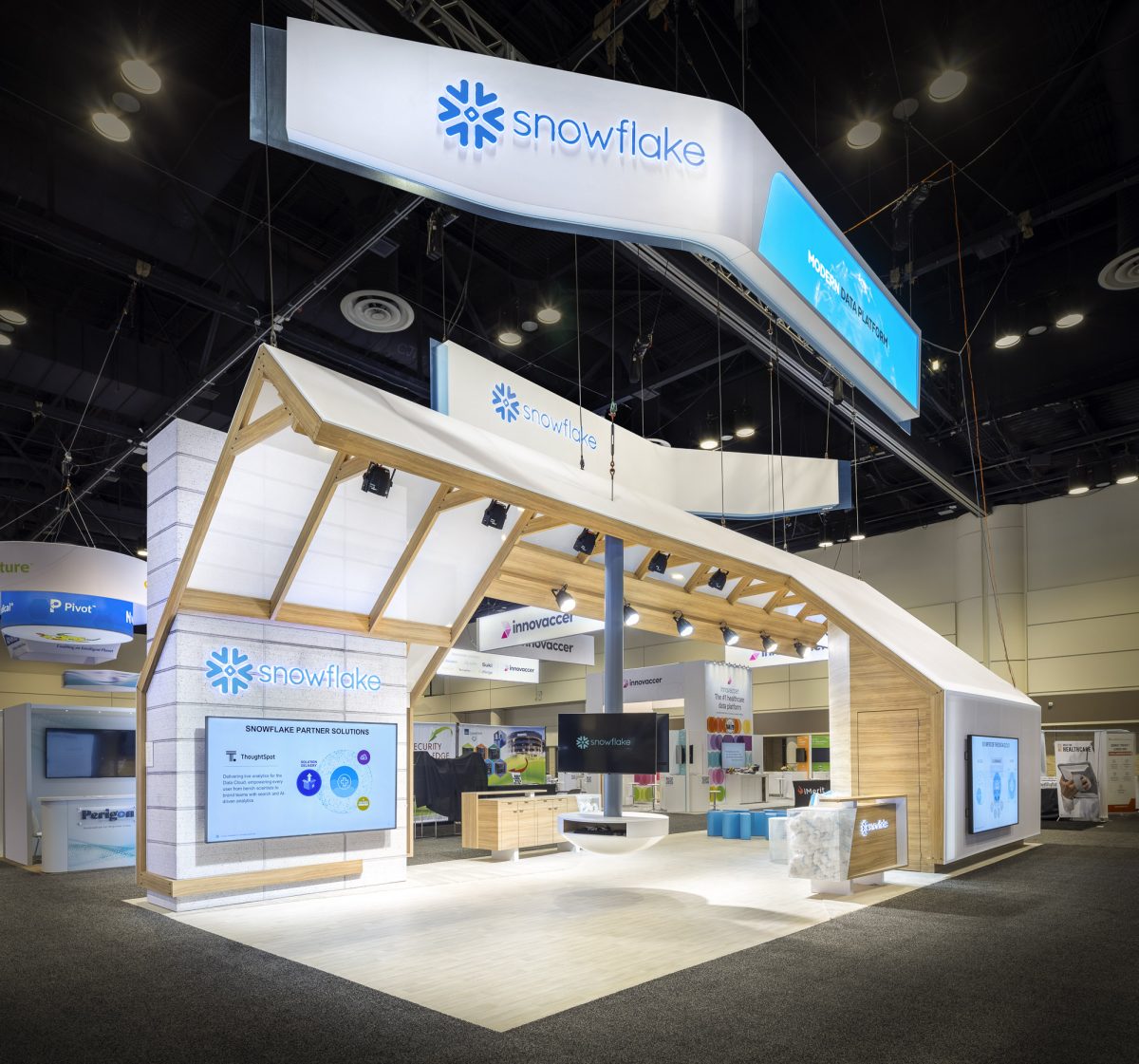 Exhibitus Brings Show Attendees in from the Cold

When Snowflake asked Exhibitus to design their booth for HIMSS, which took place March 2022 in Orlando, they came with an idea in mind that’s ubiquitous with their brand. They wanted their booth to not only look like a warm and comfortable ski chalet, but give tradeshow attendees the experience of a chalet.

Exhibitus creative director Matt Beck says, “We wanted to create the feeling of a cozy respite from the cold show floor.” And they certainly reached their goal, but not without a lot of thought and collaboration. “Snowflake brought a rough, high-level idea to us, and we got a team together to start envisioning what that idea might look like for them,” Beck continues. “Snowflake is one of those partners that we adore. They bring a high level of creativity to the table, and we’re very aligned.”

Stacie BeVille, Exhibitus senior account executive, says that the success of this booth was largely due to the design discovery process. “Snowflake takes time with us to answer important questions,” BeVille says. “For example, when they use a term like ‘high tech,’ they dig into that with us. Does that term mean gloss white and aluminum? Or does it mean curves? We have to determine what ‘high tech’ means to them and develop a common design language.”

Beck admits that taking a company that operates in a digital field and weaving a cozy feeling through its booth created a challenging dichotomy. “We wanted a high tech, digital vibe with approachable materials,” he says. “We didn’t want there to be a lack of humanity in the booth.”

The booth was made utterly approachable with interesting touches like the floating fireplace and warm, bright lighting. “There was a challenge in this design in that we wanted the booth to be themed without being campy,” says Stacie BeVille, Exhibitus senior account executive. “We wanted it to be sophisticated. Corporate, but inviting.”

Throughout the design process, one idea kept coming to the forefront, and that was sustainability. “A common thread was about choosing materials and developing processes that were environmentally responsible,” Beck says, admitting that the industry isn’t always environmentally friendly. “We did some research and discovered that a lot of our material vendors have recycled product offerings. We also tapped into some other shows, like Green Build, which has a list of decisions you can make to be certified green for that show. We used that list as a guideline.”

And all that effort and planning was worth it because HIMSS attendees certainly noticed the inviting space that Exhibitus created. “It drew a lot of buzz,” BeVille says. People on the show floor took pictures and expressed curiosity about the minds behind the spectacle. But what they didn’t have to think about—and that was by design—was how much effort went into the cohesive feel of the booth.

“We had to ensure the peak of the roof was hung perfectly so that the hovering demo remained solidly at eye level,” says Beck. Another detail that tradeshow attendees benefitted from without understanding the thought backing it was the giveaway functionality. “We wanted to make sure the people running the booth could replenish the giveaways easily,” Beck explains.

Alyson Coleman, Exhibitus account director, says that the Snowflake booths always are giveaway-heavy. “If that process isn’t designed well, walking into the booth can feel a little like walking into a store the day after Black Friday,” she says. “We created a closet with customizable shelving so that whatever the giveaway is, it can be stored easily. You don’t want booth visitors to see you struggling with the giveaways, because then that becomes the story.”

Speaking of story, the booth was not without a bit of fun controversy. To add to the realism of the chalet, the fireplace that hung from the roof was designed to emit water vapor that looked like smoke. Show organizers approved the design element, but in practice, found it to be almost too exciting for show attendees. “Next year, I think they’re going to create a new rule because of us,” Beck jokes.

It’s no surprise that an interesting element like that drew a lot of attention. “We wanted people to come away talking about us,” says Beck. And after a long break from in-person events, there’s a hunger for the human touch. “People are seeking human connection right now,” says Beck. “And that’s one of the things we tried to evoke with this booth: humanity in a digital world.”

Number of People Involved: Four laborers and one supervisor worked for 175 hours

Booth Height: 16’ for the floor structure; 24” to the top of the hanging sign