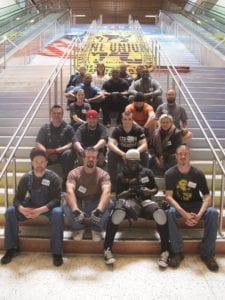 A decade without newcomers

The events that took place on September 11, 2001, shook the world and nearly destroyed the trade show industry. As trade shows across the United States were canceled, thousands of people were suddenly out of work, and installation and dismantle crews were some of the hardest hit. During the next decade, work was extremely competitive, and those who landed jobs held their ground, especially against newcomers without experience or connections.

This was especially true in the unions where work is assigned to senior members first. With barely enough to keep the veterans busy, apprentices were not given the opportunity to gain experience and rise in seniority. Fast-forward 15 years, and the tradeshow industry is in the midst of an upswing. Meanwhile, the majority of I&D crews are comprised of Baby Boomers approaching retirement without a younger workforce to replace them.

San Francisco, Calif., is a city booming with innovation. Moscone Center is a hot spot for tradeshows, currently operating at capacity and undergoing a $500 million improvement and expansion project. “The [renovated] convention center is opening in 2018, which will bring more shows to the city and the surrounding area,” said Joe Toback, President of Local 510 Sign & Display Union, which provides I&D labor for San Francisco, Oakland, San José, and all the way to Monterey.

For Local 510, which has a workforce with a median age of 53, a shortage of labor is a real possibility. Toback said, “If it’s going the way it’s going, I see the need for workforce doubling. We have to recruit now.”

Recruits of all backgrounds

The hard requirements to apply for the union are minimal: Applicants must be at least 18 years of age or older, have at least a GED, and possess a California driver’s license. Candidates are interviewed and drug tested before being accepted into the training program, which requires that they complete 3,600 hours of training, or 40 hours per quarter over the course of three years.

The union recruits at high schools, pre-apprenticeship schools and community colleges, but most of the applicants are referred by word of mouth and are already familiar with tradeshows from friends and family. With a short checklist, Local 510 receives applicants of all ages, education levels and backgrounds.

Toback explained that “a union is a collection of people from all walks of life who have gathered together to agree on working conditions and negotiate for benefits and wages that help them all.”

People looking to join the union are drawn to its low-cost benefits and security. During a time when universities drive students into debt and send graduates into a competitive job market that values experience over degrees, the union’s free, experience-based training that secures jobs upon graduation is an attractive alternative. Some union members are highly educated and have worked in the corporate world in stressful careers—like investments—but chose to leave the rat race for the union’s steadier, less competitive profession. Also, the union’s model of allowing members to choose when to work offers the flexibility to care for families or to work multiple jobs. Then there are those of retirement age who continue working to receive the union’s healthcare benefits.

Local 510 looks for people who possess a strong work ethic, problem-solving capabilities and customer-facing people skills. If the worker is talented and driven, there is an opportunity for creating a fulfilling career in the union.

However, the tradeshow industry’s inconsistent workflow drives ambitious workers to look for other opportunities during slow times. Local 510 has difficulty competing with similar trades, such as electrical, carpentry or construction, which provide steady work and predictable hours.

Retaining employees is an issue for all companies today. The Internet allows anyone to browse and apply for jobs, and recruiters search LinkedIn to poach top talent. Unlike Baby Boomers, who spent their entire careers at one company, the next generations are mobile and opportunistic. On average, Millennials spend two to five years at a company before switching to another.

While today’s career landscape encourages employees to jump quickly into new and exciting ventures, the union model depends on a total commitment from its members. Unions were born at a time when corporations exploited unskilled workers. Union members stood together to fight for equality among all members, even the older and less skilled.

As Toback himself reaches retirement age, he admits that there isn’t a group that has shown the dedication and willingness to commit to becoming the next generation of leaders for Local 510. For hard workers with ambition, Local 510 opens huge opportunities for advancement.