Just over one week ago, the Fourth Annual American International Motorcycle Expo bid farewell to its founding host city of Orlando, Florida, capping off a memorable tenure inside the Orange County Convention Center that included a record number of consumer attendees. North America’s premier powersports trade show welcomed a combined 18,399 total attendees over the course of the four-day affair, highlighted by 12,029 consumer enthusiasts who filled the aisles and booths of the 451 exhibiting companies and numerous show features over the weekend.

With global and North American debuts from OEM participants Honda, KTM, Suzuki, and Yamaha, combined with introductions from a wide array of gear and aftermarket companies, there was plenty to see and do at AIMExpo 2016, both indoors and out. In addition to the latest motorcycles, a wide variety of powersports machines including Sea-Doo and Yamaha watercraft, Ski-Doo snowmobiles, and Yamaha boats greeted indoor visitors while the latest two, three, and four-wheeled vehicles from BMW, BRP, Can-Am, KYMCO, Suzuki, and Yamaha were up for demo rides at AIMExpo Outdoors! Given the numerous offerings, consumer attendance grew more than seven percent (7.4%) from the previous year.

AIMExpo 2016 experienced the effects of Mother Nature just prior to the start of the event when Hurricane Matthew traveled up the southeastern coast, leaving destruction in its wake. While Central Florida was fortunate enough to avoid direct impact from the historic storm, many registered exhibitors, dealers, media, and international visitors were adversely affected by Matthew and were unable to attend.   Even with the weather-related challenges, 2,459 dealer attendees were on hand over the four days of AIMExpo 2016, representing 1,116 dealerships from 49 states and Puerto Rico. In addition to visits conducted during trade-only days, a large number of dealers visited the show over the weekend, including approximately 400 retailers picking up dealer/buyer credentials during the event’s consumer days. Attendance by dealers taking advantage of the complementary Powersports DEALER Seminars @ AIMExpo filled 1087 seats, earning critical and valuable knowledge on how to enhance the profitability and operations of their business from influencers representing the powersports industry, and beyond.   AIMExpo’s global impact continued to resonate as well, with a total of 44 countries represented across all attendees. Counting international visitors and dealer/buyers, 6,370 trade attendees were on hand for B2B and I2I (Industry to Industry) business and networking during the four days of AIMExpo, including 3,029 exhibitor attendees and 630 industry personnel members. They were joined by 252 members of the media, who documented all the new model and product introductions for millions of enthusiasts around the world. 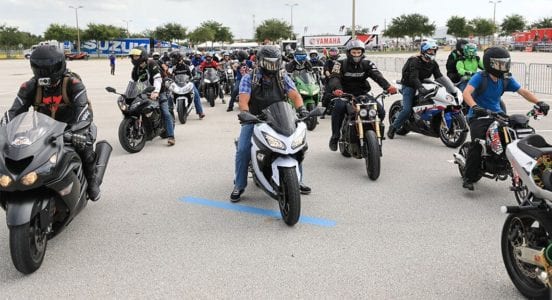 Collectively, the 18,000-plus attendees at AIMExpo 2016 contributed to more than 32 million social media impressions via Facebook, Instagram, Snapchat, Twitter, and YouTube. This growth of more than 10 million impressions year-to-year demonstrates AIMExpo attendees are more engaged than ever during their experience at the event, eagerly sharing their stories while interacting with other attendees and exhibitors.   As the sun goes down on AIMExpo in Orlando, the stage is set for the industry’s highly anticipated move to Columbus, Ohio, next September. With its close proximity to the densest population of dealerships in the country, a state-of-the-art host facility at the Greater Columbus Convention Center, and a city center that welcomes and will become all things powersports, the desirable location in America’s heartland is poised to boost AIMExpo attendee numbers across the board during its landmark fifth year. With an average early-fall temperature of 65 degrees in the month of September, Columbus will be buzzing throughout the four-day celebration, scheduled for September 21-24, 2017.

Be sure to stay tuned to the AIMExpoUSA.com website and keep up to date on exciting news as it happens.