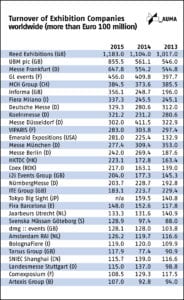 A recent study ranking trade show organizers worldwide according to revenue found that the United Kingdom and Germany lead the pack by a long shot. AUMA, the Association for the German Trade Fair Industry, concluded its research in August 2016 and found that seven of the world’s top 10 revenue earners in the trade show industry are located in one of those two countries.

The No. 1 firm on the list is Great Britain’s Reed Exhibitions, which pulled in $1.3 billion in revenue in 2015. The No. 2 company, UBM headquartered in Great Britain, was nearly $400 million dollars behind Reed with an annual turnover of $961 million. France, Switzerland, and Italy each had one trade fair organizer in the top ten, but Germany and Great Britain dominated with four and three companies respectively.

The United States only had one firm in the top 30 – Emerald Expositions – which brought in $309 million in 2015 and landed at No. 12 on the list. Just five of the top 31 companies logging more than $110 million in revenue were outside of Europe. Aside from the United States, those companies were all from Asia, including organizers from Hong Kong, Korea, Japan, and China. In comparison, eight companies in the top 31 are headquartered in Germany, and seven are in Great Britain.