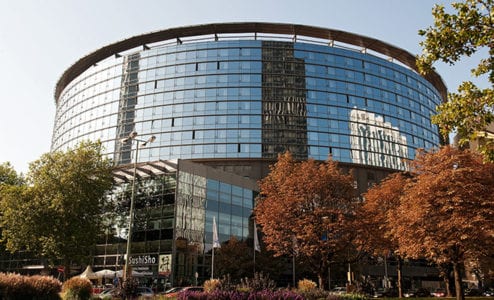 According to a report released by the Association of the German Trade Fair Industry, approximately 3.2 million people traveled from other countries to Germany in 2016 to either attend or exhibit at trade fairs. Officials say it is the highest number of foreign visitors at German trade fairs ever recorded, with the previous high logged at 2.65 million in 2013. Foreign visitors made up slightly over 30 percent of all visitors for the first time. (Pictured right, The Congress and Convention Center Messe Frankfurt, Germany)

In the report, researchers say they believe a major reason for this development was an unusually strong exhibition program in 2016. It featured a high confluence of fairs on two-, three- or four-year cycles that focus on investment goods. But analysts say that even in comparison to the predecessors of the 2016 exhibitions, the number of foreign visitors rose by around 5 percent in Germany.

However, people from the European Union and other European countries continue to account for the majority of foreign visitors to German trade shows. Visitors from these countries also attend the major consumer fairs in Germany, while the vast majority of those coming from overseas focus on exhibitions for trade visitors only. Nearly 2 million people from the EU came to German exhibitions in 2016, along with 445,000 from other European countries.

The full report is available at http://www.auma.de.