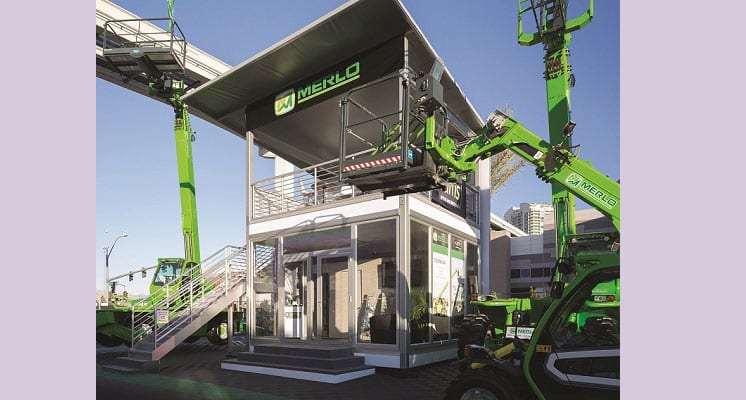 Highmark Outdoor Launches EventMAX at The World of Concrete

by Jeanne Brei and Pat Friedlander

There’s no rule that all exhibits need to be in the convention hall. Just ask Philip Foust, vice president of growth and development at Skyline-Holt Exhibits + Events. His company partnered with Highmark TechSystems at the January 2018 World of Concrete in LasVegas with a 16’ x 16’ outdoor structure for client AMS-Merlo (Applied Machinery Sales, the official importer of Merlo telehandlers for North America). Foust’s company used EventMAX from the Highmark Outdoor line launched at the Experiential Marketing Summit (EMS) in 2017, and the World of Concrete marked the debut of the EventMAX product.

According to Kurt Moore, vice president of research and development at Highmark TechSystems, the structure deployed at World of Concrete “evolved from the concept of taking an indoor deck and moving it outdoors.” As he explains, “While at first glance it might seem an easy task, there were, nevertheless, a number of issues to be resolved. We began by setting goals for the performance of any structure Highmark might field. We decided that any offering would need to meet the following requirements:

From that point we defined designs that would fit into one of five phases–from a Phase One project, comprised of little more than a weather resistant version of our legacy ExpoDeck product to a Phase Five version offering two floors of climate-controlled space complete with lighting and numerous finishes and graphic options.”

Says Moore, “The property developed for Skyline-Holt was what we refer to as a Phase Four, consisting of a fully enclosed, weather-tight and secure first floor topped off by an observation platform upstairs. The entire second story featured a canopy designed to blow away at 50-60 mph winds for additional safety. Early in January at CES, we experienced the unpredictability of Las Vegas weather, so we wanted to be prepared.” Moore adds, “For this activation we outfitted our WeatherMax perimeter walls with clear polycarbonate and client-supplied custom graphics.”

Numerous upgrades and improvements were necessary to take Highmark’s product outdoors. These included altering all components to tolerate exposure to wind, sun and rain while designing and adding more than 20 new extrusions to EventMAX inventory. A one-piece membrane protected the lower space from rain and snow, while all wall matting surfaces had integral weather seals assuring a snug interior no matter the weather. And of course, all engineering standards were upgraded to include wind load calculations.

Foust was on site at World of Concrete and was the project manager. He enthusiastically endorses Highmark Outdoor and wrote a note saying, “A huge thank you goes out to the Highmark TechSystems team! We are very happy with the outdoor double-deck solution that Highmark provided our mutual client for the World of Concrete 2018 show. The deck product looked amazing and went up and down super easy for being a 25-foot-tall outdoor deck with fully enclosed lower level. In addition to the top notch product, the Highmark team and the support they provided was second to none.”

Foust added, “The exhibitor stated that we had ‘far exceeded their expectations,’ and there is no better outcome than that. We at Skyline-Holt Exhibits + Events are thrilled to have a partner like Highmark and already have some other clients that are interested in several of their new outdoor solutions. We are looking forward to working with Highmark on many more projects in the future.”