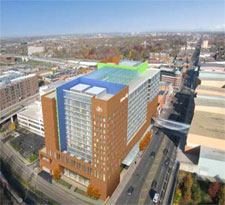 One of the first conventions to take advantage of the enhanced Destination Columbus package is the Southern Baptist Convention.

“The addition of the 532 room Hilton Columbus Downtown, combined with the existing amenities of the Greater Columbus Convention Center, will enable our city to compete as a convention destination for more than 900 national tradeshows, conventions and meetings in our target convention market,” said John S. Christie, board chairman of FCCFA. “We are in a great position to think long term. Columbus is looking beyond the short term and preparing for the next 10 years.”

The property will be owned and developed by the FCCFA, and operated by Hilton Worldwide.

“Large regional and national groups require room blocks of 1,000 to 3,500 hotel rooms during peak nights of attendance,” said William C. Jennison, executive director of the FCCFA. “The availability of this new hotel will augment the room inventory and lead to additional convention bookings that will also increase utilization of the Greater Columbus Convention Center.”

The new convention facilities are promoting a positive outlook for Columbus’ local economy, and providing hope during dark economic times.

“The Hilton Columbus Downtown will take us to the next level as a tourist destination,” said Michael B. Coleman, Columbus mayor.

“Even more importantly, it will create jobs downtown and throughout our city at a time when our residents are in need of new employment opportunities.”

“This exciting new hotel will serve as an underpinning for our already robust $7.2 billion tourism industry and stimulates additional private investment. This is the perfect time to get shovels in the ground and put people to work,” said Michael C. Mentel, Columbus City Council president. “This expansion creates jobs not only for those who build the hotel and eventually work at this hotel, but also for those working at our restaurants, our nightspots, our sports and entertainment venues, and the hotels we already have.”

The hotel will include a 160 seat, full-service restaurant, a 100 seat lounge, a specialty coffee outlet, an executive lounge, and a lobby featuring a large atrium with skylights to give an indoor-outdoor feel and a combination brick and glass façade. The Greater Columbus Convention Center’s 900 vehicle parking garage adjacent to the hotel will service the property.

“The new full-service Hilton Columbus Downtown supports Franklin County and the City of Columbus’ current investment in our convention facilities,” added John O’Grady, president of the Franklin County Board of Commissioners. “This project is a true testament to the collaborative efforts of Central Ohio’s leadership.”

New additions to the convention center will mean new and more business with increased capacity capabilities.

“We’re thrilled the FCCFA selected Hilton to operate Columbus’ new convention headquarters hotel in one of the city’s most vibrant neighborhoods,” said Dave Horton, global head, Hilton Hotel brand. “This $140 million project allows us to truly enhance the downtown hotel package for anyone considering Columbus as a future meeting destination. The hotel’s grand opening in 2012 could not have come at a better time given the much anticipated bicentennial celebration slated for the same year.”

“With the addition of the Hilton Columbus Downtown to the Destination Columbus sell, we are able to offer multiple downtown headquarter hotel opportunities to more than one convention or tradeshow at a time, as well as host larger national conventions and tradeshows within the 1.7 million square foot Greater Columbus Convention Center,” said Paul Astleford, president and CEO, Experience Columbus. “This new property significantly strengthens the Destination Columbus product offering in the global market.”

One of the first conventions to take advantage of the enhanced Destination Columbus package is the Southern Baptist Convention who announced at the groundbreaking that they have chosen Columbus to host their June 14-17, 2015 meeting. The convention is anticipated to draw 16,000 attendees bringing in 19,530 room nights and an estimated $6.2 million in visitor spending to Central Ohio.

In continuing the city of Columbus’ commitment to sustainability, the Hilton Columbus Downtown will be LEED certified as well as Green Seal certified from an operating standpoint.