History of Tradeshows and I&D

America’s Tradeshow Roots
Installation labor traces its roots to the 1930s, when the latest fashions and styles were promoted in department store windows in New York and Chicago.Window dressers or decorators created and assembled displays for retailers like Macy’s, Saks and Marshall Field’s. Industrial designer Raymond Loewy spent a portion of his career as a window dresser at Macy’s and Saks in Manhattan and Wannamaker’s in Philadelphia. 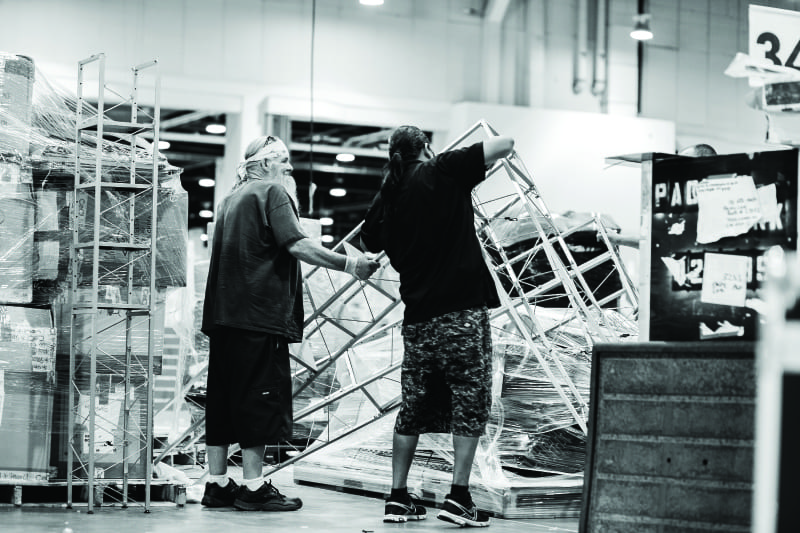 When the International Amphitheater opened in Chicago in 1934, the venue was designed to host the International Livestock Exposition for the stockyard industry, and its opening quickly established Chicago as the convention capital of the world.

After the victory in WWII, America entered a time of consumer optimism and economic growth. Large showrooms appeared in the ‘50s as well as special interest shows for industries like automobiles and boating. Similar to contemporary exhibits, cabinet shops were building displays and structures for these marketing environments and a niche industry emerged.

Portables appeared in early 1960s when Jack Downing of Downing Displays began building and selling lightweight portable displays that could quickly and easily be transported and assembled with few or no tools. He went on to invent the folding panel exhibit in the early ‘70s. Then in the mid-70s, Theodore Zeigler of Nomadic Display invented the instant pop­up, and Erik Ahlberg of Outline invented the Original 8 folding frame exhibit around the same time.

GCs and EACs
As the convention centers expanded throughout the ‘60s and ‘70s, the general contractors (GCs) were the primary providers for all labor services at tradeshows. During this same period, a small number of companies identified themselves as exhibitor-appointed contractors (EACs) or I&D contractors, but their business model was purely operational and they earned business from relationships with builders or by serving specific shows or industries, such as auto shows. Growth for EACs at this time was slow and organic as they attracted new customers among exhibitors who experienced problems with GCs and wanted an alternative labor source. The EAC companies at this time wrote orders, but they did not think beyond the services for which they were hired. The idea of selling and marketing labor services never occurred to any of the existing companies. And relative to the volume of work that the GCs had, the business earned by independent contractors was barely noticeable.

Joe Toback, president of Local 510 Sign & Display in San Francisco, was fresh out of high school and needing a part-time job when he paid $20 to join the union in 1972. He immediately had three days of work. All installers were part-time during this time, and even though exhibits rarely came with blueprints, they were simple wooden structures held together by wingnuts. The commitments were short, and a part-time laborer could choose to take the job or not, come and go at will, and collect a paycheck for a weekend of work. For a young man studying film at UC Berkeley, the job offered Toback the freedom to go to school, pursue special interests or travel.

I&D Grows Nationally
This changed in the early 1980s with the advent of the company known simply as “I&D” (now Nth Degree). I&D was the first labor company to institute nationwide sales and marketing efforts by employing a salesforce who cold-called exhibitors and offered premium service. The results were incredible – growth was approximately 200 percent per year for the first 5 or 6 years, and the business kept mushrooming because I&D took the initiative to reach out and ask for business.

Jack McEntee started I&D with his friends, Tony Amodeo and Pat Alacqua. As a school teacher with a young family to support, Jack approached his business like a school teacher. He instituted training and created a customer benefit that influences EACs to this day: “We work for you.”

Jim Wurm, who was I&D’s first sales and marketing manager, remembers calling from a list of potential customers for the National Homebuilder Shows. When he reached the display builder for the Caloric Modern Maid account, Wurm told him, “We work directly for you. You can fire us.” This was the opposite of the labor supplied by the general contractor, who would provide labor by default. In addition, Wurm would point out that I&D promised that the same people who installed the exhibit would also dismantle it and that I&D would match appropriate skill sets to the demands of the job. Also, the team who would work with the exhibit properties would come to the builder’s facility and preview the exhibit in advance, yet still charge the show rate. Basically, the EACs promised accountability and excellent service. This level of service is expected today but was revolutionary in the 1980s and established a new standard for the business.

Roadblocks to Growth
With low competition and few barriers to entry, I&D booked approximately 400 jobs from 1983-1984, and other labor companies saw the opportunity. And that’s when the GCs took notice. There were then some roadblocks to slow the growth of EACs, such as the EAC notification form, a letter from clients authorizing the EAC to work for them on the show floor, which some shows required an unreasonable 90 days before move-in. Show managers claimed that the extended notification was necessary because the GC needed this information to make the labor call, despite the fact that the labor call was never made that far in advance, but show managers protected their view of the general contractor’s role as supplying people.

Yet the EAC segment kept growing, and soon they began setting up their own service desks at tradeshows, which was a position usually only held by the GCs as a service and sales center. When EACs set up their desks, the perception was that they were also selling from the desk, so some show organizers would try to create special packages in conjunction with the GC and mandate that exhibitors had to use the GC for these packages.

Keys to Success
Demanding the option for an alternative service, the exhibitors would object to the roadblocks and advocate for their hiring of the EAC. Serving a customer need in the industry, the EACs continued growing. What was the key to the EAC’s success? The answer is simple: The focus was on customer service and cultivating top-quality workers.

The EACs realized that the real task before them was not only to attract good people but to keep them as well; people had to be kept busy but not overworked. The formula was to find good talent and commit to them a promise for a definite amount of work, and at the end of the year, to make sure they were paid accordingly. The result was that the EACs began attracting larger clients and better employees.