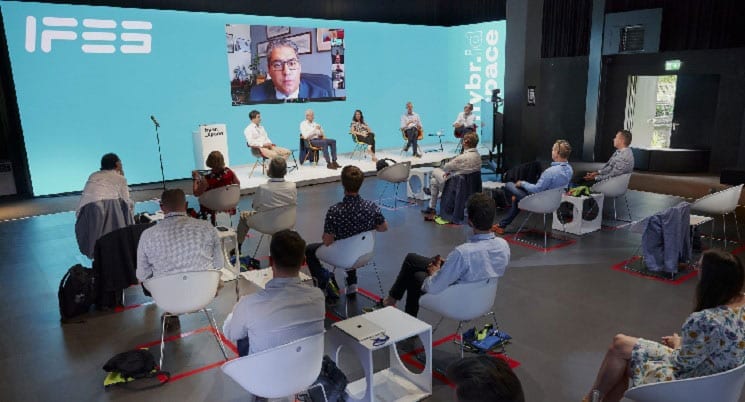 In mid-March it became clear that a three-day annual meeting with about 200 guests in Amsterdam at the end of June would not be possible, so the meet 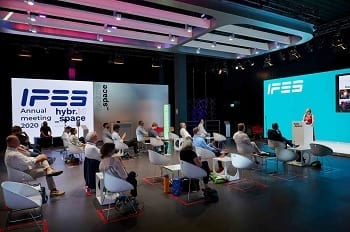 ing in Amsterdam was postponed to 2021. “Postponed” has been the personal motto of the year of IFES Managing Director Uta Goretzky ever since. Nevertheless, according to Belgian law, the need for an annual meeting remained in the first half of the year. In an industry that is known for “face to face,” “making” and “travel,” it was soon clear that the regulations should not be fulfilled online alone.

Therefore IFES decided to use the Hybr.id Space of the companies Holtmann Messe + Event, deutschewerbewelt and ICT for its annual conference. The space offers the perfect combination of stage, showcase area and stream. With 40 physical participants and over 100 online, the annual conference has at least reached the same number of participants as the previous meetings.

Even though the global economic dynamics make it more and more difficult to make statements about the future development, IFES presents the planned projects for the future: Best of Events, Exhibitor Live, World Summit Amsterdam 2021, ExpoDubai. 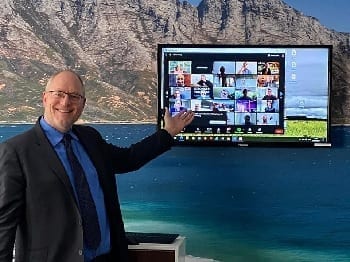 Following the IFES regulations, the election of the new chairman was due. And IFES elected its first African president, Justin Hawes (pictured left), who is active in several South African countries with his company Scan Display. Hawes was the first person from a developing country when he was elected to the IFES Board as treasurer in 2013. He has been one of the three vice presidents of the association since 2015.

Hawes attended the General Assembly last week via Zoom from his office in Rosebank, Johannesburg, from where he will present his vision for IFES in 2021-22. He believes the industry is facing challenging times and it is important that IFES continues to maintain its relevance and provide support to its members. Hawes says, “I am grateful to the members for giving me the confidence to lead the association in this critical phase.”

Hawes will take over the baton on Jan. 1, 2021 from Peter Theodorides, who has developed IFES under the idea of “sharing knowledge” as a business and knowledge exchange platform, so that every member association and member company has the opportunity for multilateral contacts and networking at all times.

At the end of the year, after 12 years on the Board, four years as president and two years as past president Voicu Sferdianu leaves the Board. He was the one who steered the association into calm waters after turbulent years and thus created the conditions for IFES to succeed in its “journey on sight” in the corona crisis so far.

IFES, the International Federation of Exhibition and Event Services, is comprised of almost 300 companies from all over the world—national associations and companies active in the fields of design, conception, production and services for exhibitions, trade fairs and events. IFES offers a platform for international cooperation, which is achieved through networking and knowledge exchange. Founded in 1984—on the initiative of national associations in Belgium, Denmark, France, Germany, Italy, the Netherlands, Great Britain and the U.S.—IFES celebrated its 35th anniversary in 2019. The association is registered in Brussels under Belgian law. The “global collaboration network” briefly describes IFES. Each of these companies has signed the IFES Code of Conduct—so that when an IFES partner serves the customer of another member, both the customer and the member know that they are being professionally advised and supplied by a company that meets the highest quality standards. This is a member benefit with priceless added value. In order to increase the number of partnerships within the IFES family, the association offers several opportunities for “getting to know each other.” The most prominent one is the IFES Summit, which takes place every year in June. “Summit of Inspiration” was the theme for 2019, when IFES met in the Greek capital Athens. “Winds of Change” will be the motto for the next Summit (June 23-25, 2021) in Amsterdam. The big second is the IFES Global Village, which premiered at EuroShop in Düsseldorf in 2017 and continued at ExhibitorLive in Las Vegas, and now alternates  between the Rhineland and Nevada. Two educational programs offered by IFES—Masterclass and Certified Expert—ensure well-trained, globally-minded employees at the service of this industry. Sharing knowledge is the basic idea of the association.