ISES members have fun all in the name of work 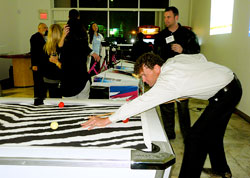 NASCAR racing, ski racing, a basketball shoot-out, a pool game and a money grab may sound like just a fun night out. In reality, it was just a recent monthly meeting for the Las Vegas Chapter of the International Special Event Society (ISES) a professional networking group from a variety of special event vocations including caterers, planners, audio-visual technicians, coordinators, educators, journalists and managers.


The group’s monthly meetings provide members an opportunity to not only network with other professionals, but to also have some fun and relax while mingling.

“ISES is a group of individuals from all professional backgrounds, and is based on education and networking,” said Thom Pass, ISES president.

While most professional business meetings are scheduled around agendas, budget issues and upcoming events, ISES takes a creative and unique way of going about their meetings. Get-togethers are hosted for ISES members and sponsors every month and each with a new and unique theme.

The first meeting of 2010 was held on Jan. 28 and held an Olympic theme. The meeting was held at Amusement Game Rentals (AGR) in Las Vegas, a fitting sponsor for the theme. 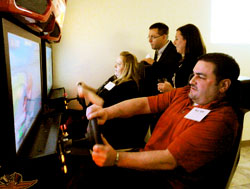 As attendees entered the office they were checked in at a Marilyn Monroe-decorated poker table, complete with chips, cards and ISES member nametags.

As members signed in at the front desk, they were each randomly assigned to a country. For the rest of the evening, the countries competed against each other in a series of sport games, until the final two teams were given the prize of 15 seconds in a money booth to grab as much cash as they could to take home.

While AGR provided the space for the meeting, it also provided the entertainment with a full-scale pool table, a NASCAR racing game, a double-shot basketball shoot-out, a foosball table, a super ski racing simulator and a vault money booth.

“We work with ISES as often as we can,” said Eric Brashear, AGR president and former member of the ISES board of directors in Las Vegas. “ISES is a tremendous organization, filled with event professionals who demonstrate a higher level of commitment to the industry by both belonging and participating in the association. We are proud to partner with ISES whenever we can.”

In combination with entertainment and amusement, attendees also were presented with food, drinks and two hours of quality professional networking opportunities. Attendees mingled with other professionals in order to promote their brands and businesses.

“Through networking we can all help each other out,” said James Switzer, marketing director for Exotics Racing.

The idea to theme ISES meetings came from needing “a fun, networking event,” and the fun-filled meetings will continue on a monthly basis, Pass said. “The more sponsors we get, the more fun we make it.”

The theme for the Feb. 27 meeting is centered around Valentine’s Day with wine and chocolate and held at the Tuscany Kitchen at the Bellagio.