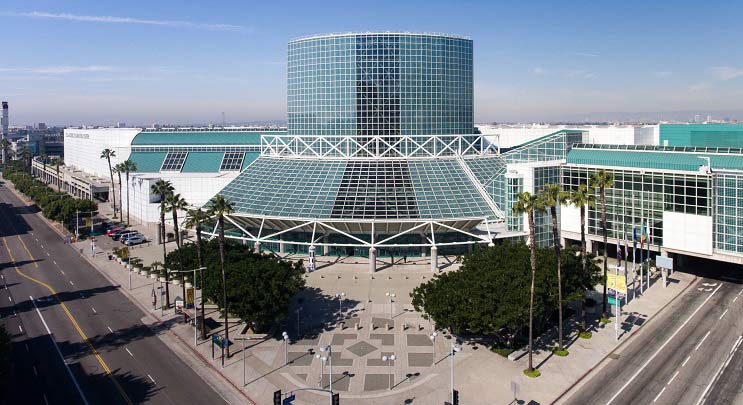 The Los Angeles Convention Center (pictured above), owned by the City of Los Angeles and managed by AEG Facilities, is proud to be the first convention center in the U.S. to permanently install a 5G wireless network. This cutting-edge technology was deployed at the LACC in conjunction with the GSMA Mobile World Congress Americas, in partnership with CTIA on Sept. 12-14.

“The establishment of 5G at the Los Angeles Convention Center will serve as a catalyst across all of Los Angeles,” says Doane Liu, executive director of the City of Los Angeles Department of Convention and Tourism Development. “This is a significant development that will drive technological advancements in our city, reinforcing Mayor Eric Garcetti’s goal that Los Angeles will continue to be the number one digital city in the United States.”

The fifth generation (5G) of wireless internet and voice services, improves on 4G LTE that currently accounts for around three-quarters of total mobile connections in the U.S. (excluding licensed cellular IoT). It’s expected that 5G will move data faster and be more responsive, dramatically increasing wireless speeds and capacity to transform services such as AI, VR, and video calling. It will facilitate additional technology uses including improved Internet of Things, autonomous vehicles, smart cities and more. Launching a powerful 5G network enables the next level of technology, as showcased in demonstrations at the 2018 Mobile World Congress Americas, a three-day conference and exhibition convening the mobile ecosystem and its adjacent industries.

“5G will transform the way billions of people consume media and entertainment on their mobile devices and the L.A. entertainment and mobile tech communities will be key in shaping how it will all come together,” says Reed Peterson, head of Mobile World Congress Americas, GSMA. “The LACC is taking a visionary approach in deploying its new 5G network, providing next-generation capabilities for exhibitors and attendees at Mobile World Congress Americas, and many other events, well into the future.”

“The 5G installation will be the legacy of MWCA at the Los Angeles Convention Center,” says Ellen Schwartz, general manager of the LACC. “In addition to 5G, approximately 100 new antennas have been connected in the facility. All 4G LTE networks have been upgraded, bringing the best in wireless to future events held at our convention center.”

The Los Angeles Convention Center is renowned internationally as a prime site for conventions, tradeshows and exhibitions. Owned by the City of Los Angeles and professionally managed by AEG Facilities, the LACC attracts more than 2.5 million visitors annually. The facility is an integral economic component to the Southern California area, generating economic benefits through attendee direct and indirect spending and sustaining more than 12,500 local jobs. The LACC also remains an enduring symbol of environmental sustainability and social responsibility, and is proud to be a LEED Gold certified facility; the venue was recertified on the Gold level in 2015 making the LACC the first convention center of its size in the U.S. to receive LEED EB:O+M Gold recertification. For more info, visit lacclink.com.