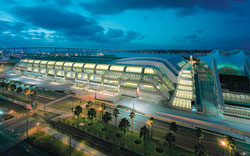 On April 6, after more than 18 months of review and evaluation, the Unified Port of San Diego authorized the transfer of 6 acres from Fifth Avenue Landing LLC to the San Diego Convention Center Corporation (SDCCC), protecting the last remaining land that would allow for an expansion of the center. In September, the Mayor’s Citizens Task Force on the Convention Center Project identified the Fifth Avenue Landing site as the recommended site for a proposed expansion.


“I applaud the Port Commissioners for approving this agreement and recognizing the importance of expanding our convention center,” said San Diego Mayor Jerry Sanders. “While there is more work to be done before we can break ground, today’s action is a critical step forward.”

“This is a major milestone in our efforts to expand this regional economic engine which has transformed San Diego into a world-class meeting and convention destination” said Bob Nelson, chairman of the SDCCC board of directors. “As our recent efforts to secure future bookings of Comic-Con International demonstrates, we need more space to keep our most valued clients and ensure San Diego remains a top choice for conventions into the next several decades.”

SDCCC will pay $1 million from reserves at the closing of the agreement and issue a promissory note for the remaining $12.5 million to be secured by the 6 acres. There will be an annual principal payment of $500,000. The balance of the principle and interest will be paid by the SDCCC at the end of the five-year financing period. With the land transfer complete, SDCCC will begin working in partnership with the Port to complete the necessary environmental and permitting steps.

“As the Mayor’s Citizen Task Force found last year, an expansion of the convention center is necessary to generate more economic impact for the city and to create new jobs,” said Carol Wallace, president and CEO of SDCCC. “Our current size is limiting our ability on many levels because we lack enough meeting space to meet market demand. We have lost or turned away 381 events in recent years because of lack of space or available dates. An expansion would allow us to accommodate 89 percent of that lost business.”

“I want to particularly applaud Mayor Jerry Sanders for his strong leadership,” Nelson added. “His appointment of a task force last year was an important part of getting us to this important step. Today is a good day for all San Diegans as it helps move us closer to generating new jobs, new tax revenues to fund essential city services and new opportunities to enhance the waterfront for not only visitors, but for residents as well.”