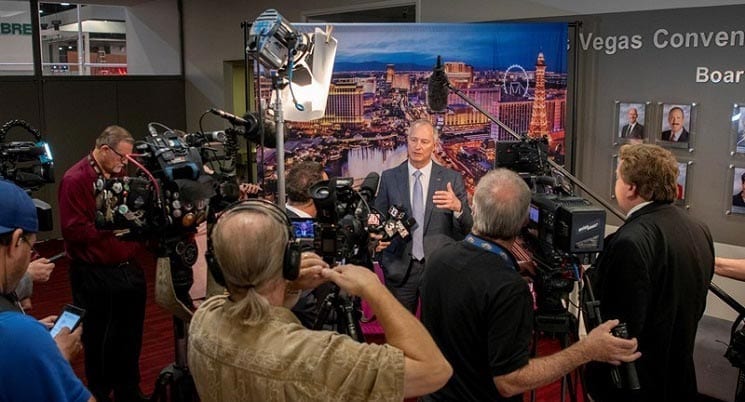 (Pictured: LVCVA Chief Executive and President Steve Hill talks to media)
The Las Vegas Convention and Visitors Authority Board of Directors on May 22 approved a $48.7 million contract with Elon Musk’s The Boring Company to design and construct a people mover for the Las Vegas Convention Center that could rapidly and safely carry passengers in autonomous electric vehicles via a loop of underground express-route tunnels.
“Las Vegas will continue to elevate the experience of our visitors with innovation, such as with this project, and by focusing on the current and future needs of our guests,” says Steve Hill, chief executive officer and president of LVCVA.
The LVCVA Board of Directors approved the total contract value of $48.7 million. The contract highlights three underground passenger stations, a pedestrian tunnel and two vehicular tunnels with an expected total length of approximately one mile. Other essential system components include:
“The Boring Company is excited to contribute to the future of Las Vegas, and work with leaders who have a vision for transportation,” says The Boring Company President Steve Davis.
The LVCVA’s approval of the TBC contract is a result of a multi-step process that started in 2018 with a request for information to gauge interest. A request for proposal was then issued. Interviews with the selected finalists were conducted by an evaluation team who determined the recommended company. The evaluation team was comprised of representatives from the LVCVA, private organizations including a Las Vegas resort property and a consultant with experience in transportation systems, construction and operations of automated people-moving systems.
TBC’s contract calls for an underground loop system that offers reduced total costs, less disruption to pedestrian and vehicle traffic, and faster construction time than traditional at-grade or above-ground options while maximizing passenger and pedestrian safety. The loop will be designed for ridership of at least 4,400 passengers per hour and is scalable depending on Las Vegas Convention Center attendance.
Currently in the midst of an expansion, the LVCC will span 200 acres when complete in time for CES in January 2021. Conventioneers walking the facility from end to end would log approximately 1.5 miles creating the need for an on-property guest transportation solution. In 2018, Las Vegas had more than 42 million visitors and hosts more than 1.6 million attendees annually.
Overall, the tourism industry continues to be crucial to Southern Nevada’s economy generating $60 billion in total economic impact, supporting approximately 383,000 jobs and $16.4 billion in local wages and salaries. These jobs represent 39 percent of Southern Nevada’s total workforce.
Las Vegas convention highlights:
The Las Vegas Convention and Visitors Authority (LVCVA) is charged with marketing Southern Nevada as a tourism and convention destination worldwide, as well as operating the Las Vegas Convention Center.  With nearly 150,000 hotel rooms in Las Vegas alone and approximately 12 million square feet of meeting and exhibit space citywide, the LVCVA’s mission centers on attracting ever increasing numbers of leisure and business visitors to the area. For more info, visit www.lvcva.com.