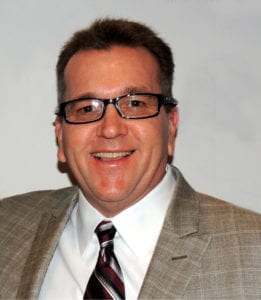 Leonard Metcalf has been named senior vice president of BlueHive Strategic Environments. Leonard began his career in the trade show industry in 1985 as an Account Executive at Folio Exhibits. During his 16 years at Folio Exhibits, Leonard was an influential and groundbreaking factor in helping the company grow from a portable & modular exhibit provider, into a major northeast custom exhibit design and production firm. As Folio expanded, Leonard grew into management, serving in multiple roles including director of Logistic Services and director of Account Services.

In early 2005, Leonard received a call from Paul Hanlon, the former owner/CEO of Folio. Paul told Leonard that he was starting a new company called BlueHive and that there may be an opening for him down the road.

“Paul had hired me at Folio and brought me into the trade show business,” explains Metcalf, “I worked for him for 16 years, so it was one of those opportunities I simply couldn’t refuse”.

The rest, as they say, is history. Leonard joined BlueHive in July 2005 as Project Director; employee #22. In 2008, Leonard was named BlueHive’s general manager, a promotion that proved integral to the company’s explosive growth over the past five years.

“In promoting Leonard to senior vice president,” commented BlueHive CEO Paul Hanlon, “we are not only recognizing the tireless efforts of an industry heavyweight, but strategically positioning BlueHive for another period of growth. I, for one, couldn’t be more excited!”

BlueHive currently has 90 employees and is based in Worcester Massachusetts. It occupies two facilities in Worcester totaling in the excess of 130,000 square feet, and maintains satellite sales offices in Portsmouth, NH, Long Island, NY, and Atlanta, GA. For more info, visit http://www.blue-hive.com/.