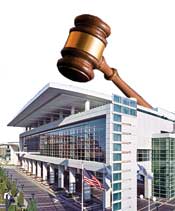 Illinois House and Senate voted to reject Gov. Pat Quinn’s amendatory veto on May 27, putting the bill that calls for major changes at Chicago’s McCormick Place into law. Already by the next morning the Metropolitan Pier and Exposition Authority (MPEA) team was ready to start turning the reform into reality.


“This legislation gives us the opportunity to align McCormick Place with our competition by providing more flexibility for exhibitors to do work themselves and lower costs for services,” said David Causton, general manager of McCormick Place.

Causton noted the first real change to go into effect is the appointment of the trustee.

“Mr. (Jim) Reilly will be on the job today starting the process of implementing all the changes that have been talked about,” Causton continued. “We still need to modify contracts, right of entry agreements with contractors and EACs (Exhibitor Appointed Contractor) before work rules take effect. We need to qualify other electrical contractors so that show organizers can bid their work against Focus One. We need to issue a Request for Proposal (RFP) for a new food service operator and a RFP for private management services.”

Quinn had vetoed the bill earlier in the week, saying it didn’t go far enough to reform operations and control costs. He called the bill’s provision regarding a legislatively appointed trustee unconstitutional and objected to the increase in fees on airport taxi and bus rides, which will now be doubled.

Another major provision of the governor’s veto dealt with the number of unions working on the show floor. Had the veto passed, it was anticipated the teamsters would absorb the riggers, and the carpenters would absorb the decorators. That is unlikely to be the case now. The new law allows all five unions, including the electricians, to work at the center. Considering the collective bargaining agreements in place, it is possible that some of the unions may choose to pursue legal action. Frank Libby, president of the Chicago Regional Council of Carpenters, was unavailable for comment as of press time.

The National Restaurant Association, which has held its annual Hotel-Motel show in Chicago for more than 60 years and was one of the organizations that pushed for a quick passage of the law, is expected to make a decision about future locations as early as next week. The show covers 6 million square feet.

The possible effect of the new law on other major tradeshow and convention markets with heavy union regulations remains to be determined.

“We do not feel that it will have any impact on San Francisco,” said Richard Shaff, vice president and general manager of the Mascone Center in San Francisco. “We don’t have the issues they have in Chicago.”

“This is an opportunity to proactively work towards flexible responses to the demands of different groups, as well as work with labor as a critical partner,” he said. “If these developments drive new thinking, that’s great. We all need to be looking at being flexible and adapting more to meet our customers’ needs.”

ECN will continue to monitor the situation and report on how the new law affects the workforce at Chicago’s tradeshow and convention facilities. See exhibitcitynews.com for updates.